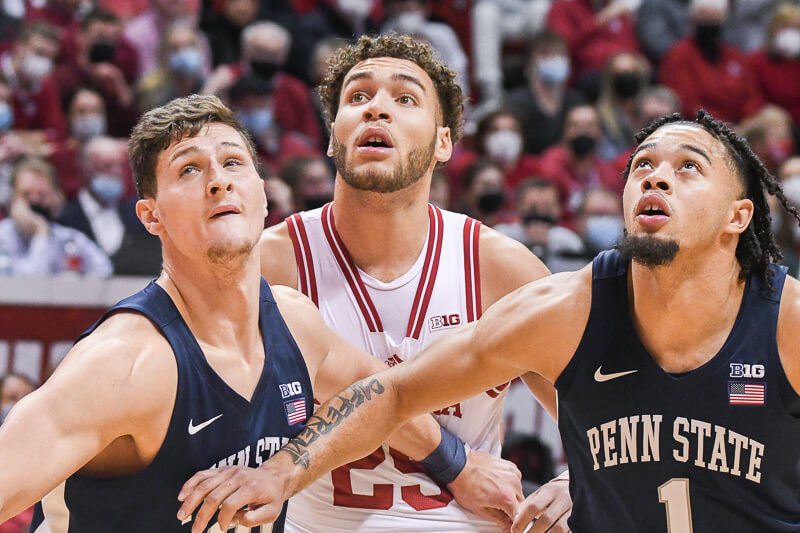 Indiana improved to 15-5 overall and 6-4 in Big Ten play with a comfortable 74-57 win over Penn State on Wednesday night at Simon Skjodt Assembly Hall.

The Hoosiers led wire-to-wire and improved to 13-1 at home this season. Here are five takeaways from the victory over the Nittany Lions:

Indiana’s starting lineup has been scrutinized for its slow starts that often dig a hole for the bench.

On Wednesday, the Hoosiers built a five-point lead in the game’s opening minute. By the first media timeout, Indiana had already buried Penn State and led 15-2.

Not only was Indiana sharp offensively, but the energy on defense was a welcome change from Sunday’s loss to Michigan. On Penn State’s first possession, Indiana forced a shot clock violation. The Hoosiers pressured the ball, got into passing lanes and made the Nittany Lions uncomfortable from the opening tip.

It was a performance Indiana’s starters need to produce more regularly.

The starters were challenged by Mike Woodson after the Michigan loss. Rather than changing the lineup, Woodson gave his lineup a chance to respond. They did, which is a positive sign for this team’s growth.

“I think we took it personally,” Race Thompson said postgame. “I think it really was just about energy, just calming down a little bit, playing with more energy, but at the same time being composed and really keying in on what they’re doing.”

Indiana’s point guard depth took a hit when Rob Phinisee, the hero in the team’s 68-65 win over Purdue, went down with a right leg injury in the first half.

Phinisee left the game with 7:21 remaining in the first half. He didn’t return to the game or the bench the rest of the evening.

Mike Woodson didn’t have an update on Phinisee in the postgame press conference other than he’ll be evaluated further on Thursday.

Woodson also revealed that Khristian Lander, who has not played since the Northern Kentucky game on Dec. 22, was not available to play due to an injury.

“He would have played tonight if I could have stuck him in there after Rob went down,” Woodson said of Lander. “But he can’t play.”

Fortunately for the Hoosiers, Xavier Johnson continued his strong play with a team-high 19 points, six assists, four rebounds and three turnovers in 32 minutes.

If Phinisee and Lander are not available on Saturday at Maryland, it’s likely that Johnson will continue logging upwards of 30 minutes, which he’s now done for three straight games.

Race Thompson was 3-of-25 from beyond the 3-point line entering the Michigan game.

Thompson made a 3-pointer in the loss to Michigan and then followed it up with a 2-of-2 performance from distance against Penn State.

As BTN analyst Jess Settles stated on Wednesday’s broadcast, Thompson’s mechanics and release from the perimeter look good. Opponents have been leaving him wide open all season, but he’s been unable to capitalize until the last two games.

If Thompson, who scored 18 points in the Penn State win, can knock in the occasional 3-pointer, it would be a significant development for Indiana.

Trayce Jackson-Davis has often been unstoppable in one-on-one coverage in the post. Surrounding Jackson-Davis with four viable 3-point threats to start games could force Indiana’s opponents to rethink doubling the post so frequently.

Tamar Bates provides a boost off the bench

The 6-foot-5 guard scored in double figures in three of the team’s first eight games. He logged more than 20 minutes in four of those games.

But since scoring 13 points in a win over Nebraska on Dec. 4, his impact has been minimal. Over the last 10 games Bates had appeared in, he was averaging only 1.6 points per game. He had made just two of his last 12 3-point attempts.

On Wednesday, Bates scored six points in 15 minutes. He also had a rebound, an assist and a blocked shot. He didn’t commit a turnover.

It was a performance that could boost confidence for Bates, who has the skill set to provide instant offense as part of Indiana’s second unit.

Energy wanes in the second half

But Woodson, who never shies away from the truth when evaluating his team, said the Hoosiers “stunk” in the second half.

It was a spot-on assessment.

After holding Penn State to 1-of-10 3-point shooting and 16.7 percent from the field in the first 20 minutes, Indiana was outscored in the second half.

Penn State made eight of its 16 3-point attempts in the second half and scored 1.38 points per possession.

Indiana was able to get away with the lackluster second half because it had already buried Penn State in the first six minutes.

Woodson, however, reiterated that he’ll need a more complete effort from his team to win on the road this weekend at Maryland.

“We’ve got to commit ourselves for 40 minutes to go down there and get a win,” he said. “It’s not going to be easy, but we’re capable of winning on the road. We proved that in Nebraska.”