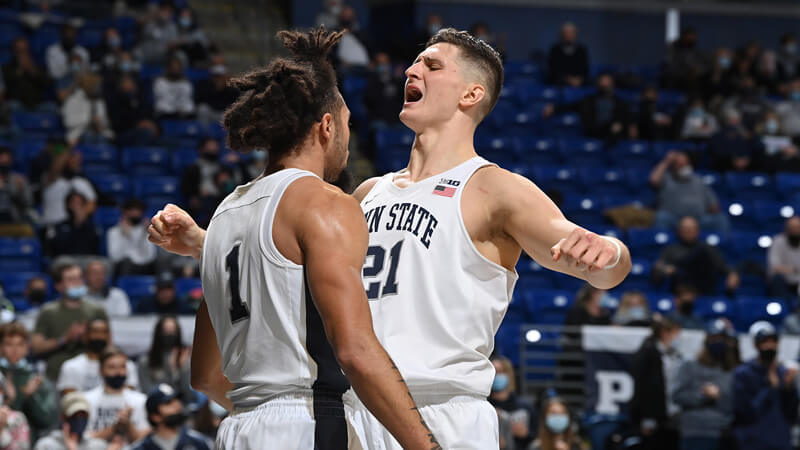 Indiana will look to avenge a loss from earlier this month when it hosts Penn State tonight at Simon Skjodt Assembly Hall.

The Nittany Lions are 8-8 overall, 3-6 in Big Ten play and No. 81 in the KenPom ratings. Penn State won the first meeting between the two programs 61-58 on Jan. 2 in State College.

Tonight’s game will tip at 8:30 p.m. ET on BTN with Cory Provus and Jess Settles on the call:

Indiana couldn’t sustain the momentum from back-to-back wins over Nebraska and Purdue and fell in convincing fashion to Michigan on Sunday afternoon in Bloomington.

Mike Woodson called the performance “awful” and the Hoosiers were thoroughly dominated by Michigan in the 80-62 loss.

Now the focus shifts to a pivotal matchup with Penn State, which already beat Indiana earlier this month at the Bryce Jordan Center. Penn State has lost its last two games and three of its last four.

Penn State controlled the tempo and hit 11-of-22 3-point attempts in its win over Indiana on Jan. 2.

The Nittany Lions play the slowest pace of any team in the conference and the 59-possession contest in State College was the lowest possession game of the season for Indiana and second-lowest for Penn State.

Most of Indiana’s woes in the loss were related to a poor shooting performance and Penn State knocking down several difficult, contested 3-pointers.

The Hoosiers shot only 46.3 percent on 2s and 23.5 percent on 3s in the loss. Trayce Jackson-Davis struggled around the basket and hit just eight of his 17 2-point attempts. He also only grabbed five rebounds, which drew criticism from Woodson in the aftermath of the loss.

Four different Penn State players hit at least two 3-pointers in the win and Myles Dread came off the bench and made four of his five attempts. Jalen Pickett, a transfer from Siena, also gave Indiana’s backcourt problems as he knocked in three triples and led the Nittany Lions with 15 points. Penn State won the game despite getting only six points on six shot attempts from John Harrar.

Rebounding was also a major factor as Penn State only allowed Indiana to rebound 24.3 percent of its missed shots while grabbing 35.5 percent of its own misses.

Penn State is shooting just 32.9 percent on 3s in Big Ten play and its hard to see the Nittany Lions repeating their performance from distance at the Bryce Jordan Center. Penn State hasn’t made more than nine 3s in a game since and over its last five contests, is 36-of-114 (31.5 percent) from the perimeter.

Indiana, however, has been starting slowly nearly every game recently and falling behind against a team that thrives on slowing the game down is not advisable.

Penn State is a turnover-prone group and Indiana was able to turn 13 turnovers into 18 points in the first matchup. In the rematch, the Hoosiers are going to do much better on the glass and at getting to the foul line. Indiana scored just eight points on free throws in State College and Penn State won the rebounding battle.

The Vegas line favors Indiana by 8.5, KenPom projects Indiana to win by seven and the Sagarin ratings also like Indiana by seven.

Indiana remains in the NCAA tournament in the latest projection by Andy Bottoms, but can’t afford to lose many more games in Bloomington.

With just one road win on its ledger and a tough road game looming this weekend in College Park, this is a key spot for the Hoosiers. Indiana needs to break out of its funk of slow starts and take control early or it will breathe life into a Penn State team that thrives on playing a slow pace and hitting tough shots late in the shot clock.