What To Expect: Rutgers 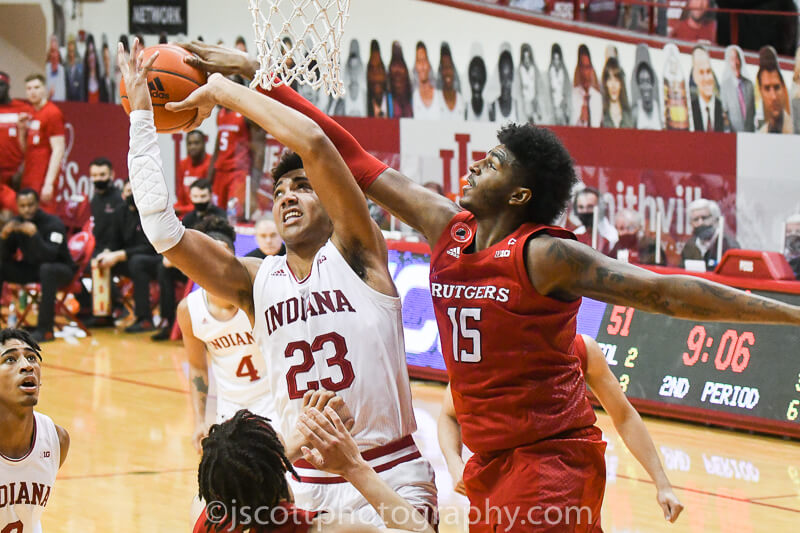 Indiana will look for its fourth Big Ten road win of the season when it travels to Rutgers on Wednesday. The Scarlet Knights are 12-9 overall and 8-9 in conference play.

Wednesday’s game will tip at 8 p.m. ET on BTN with Kevin Kugler and Stephen Bardo on the call:

A loss on Saturday to Michigan State has left Indiana with little margin for error as it seeks its first NCAA tournament bid under Archie Miller and the first for the program since 2016.

Indiana has been a perennial bubble team under Miller and this season is no different. The Hoosiers are 12-10 overall, 7-8 in Big Ten play and have five home losses in conference play. Indiana has two chances for a quad 1 win this week with tonight’s game and then Saturday’s home contest against Michigan.

Rutgers came to Bloomington on Jan. 24 on a five-game losing streak. Their performance in that Sunday matinee at Simon Skjodt Assembly Hall may have saved their season.

Rutgers beat Indiana 74-70, its first of four straight wins. Indiana couldn’t handle the Rutgers guards, who got past its defenders on the wing with ease. The Scarlet Knights scored 1.12 points per possession in the win, shot 61.2 percent on 2s and outscored Indiana 30-24 in the paint.

Containing the perimeter has been a persistent issue for Indiana’s guards this season and was a huge factor in Saturday’s loss to the Spartans when Aaron Henry, Joshua Langford and Gabe Brown propelled Michigan State to 52 second-half points.

Despite connecting on 10 of their 16 3-point attempts, Indiana simply couldn’t handle the size and athleticism of Rutgers in the paint and at the rim. The Hoosiers shot a dismal 35 percent on 2s and Myles Johnson made things tough on Trayce Jackson-Davis, who shot just 4-of-10 from the field. Indiana also settled at times as it attempted eight long 2-point attempts in the contest and made just two of them. In his press conference on Tuesday, Miller called Johnson the best defender in the Big Ten.

• Turnovers will be a major factor: Indiana’s sloppy ball-handling changed the game early in the second half in Bloomington and the turnover numbers for both teams indicate that this may be an uphill battle for the Hoosiers. Rutgers is 2nd in the league in turning its opponents over and fourth-best at taking care of the ball. Conversely, Indiana is ninth in the league in turnover percentage and is just 10th best at forcing turnovers from its opponents. Miller has harped all season about the importance of Indiana committing only nine or 10 turnovers per game, but it’s a goal the Hoosiers have rarely accomplished.

• Can Trayce get comfortable against Johnson? Trayce Jackson-Davis is on track to be a first team All-Big Ten performer, but he’s often struggled with strong, physical defenders in the post. Johnson is second in the conference in block percentage and when he doesn’t block shots, his physicality is tough to finish through. Wednesday’s game will be another test for Jackson-Davis and the Hoosiers need him to finish better against Johnson.

• Which Indiana guards will show up? When Indiana’s guards play well, the Hoosiers have been a solid team. But for the most part, Indiana has not received consistent performances from Al Durham Jr. and Rob Phinisee. Durham Jr. has struggled defensively and while he’s capable offensively, he’s up and down with his production. Phinisee is Indiana’s rock defensively but has lost his confidence offensively. Indiana needs Durham Jr. and Phinisee to hold their own against Baker and Jacob Young if they hope to pull off the road upset.

While no game is a must-win given that a conference tournament exists with plenty of opportunities for wins to boost a resume, Indiana probably needs two wins in its last four regular season games to feel good about its tournament chances heading to Indianapolis.

Per KenPom’s ratings, Wednesday’s game is IU’s second-best opportunity for a win in its final four regular season contests. The KenPom projection is Rutgers by four with a 61 percent chance for a victory for the Scarlet Knights. The Sagarin ratings like Rutgers by just under three. The Vegas line, which opened at Rutgers by four, sits at Rutgers by 3.5 as of early Wednesday morning.