On Indiana’s next try, here’s another high ball screen with Cockburn playing way off the action and awaiting Franklin: 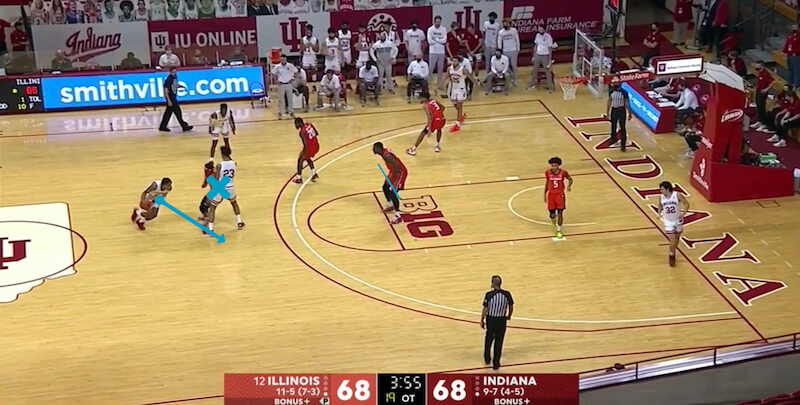 Again we see two Illini defenders (Cockburn, Frazier) stopping an Indiana drive, as another (Jacob Grandison) plays off a non-shooter (Thompson) to keep an eye Jackson-Davis. Curbelo has also moved off Galloway towards Franklin’s drive: 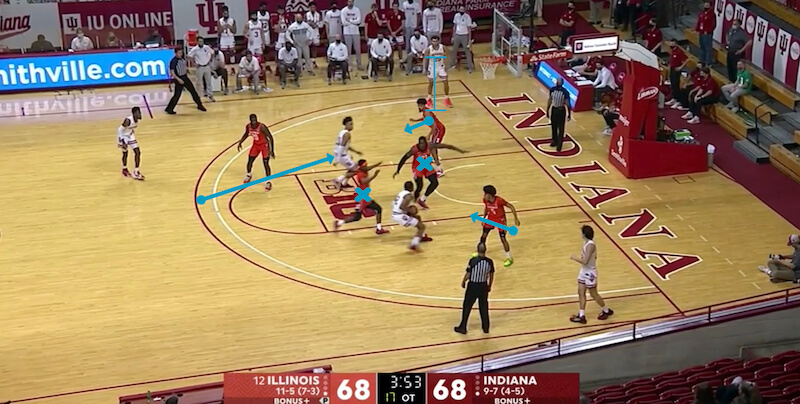 Franklin passes it back up top to Durham with three Illinois defenders (two of which are defending Jackson-Davis) in the paint and one (Curbelo) still inching towards Franklin: 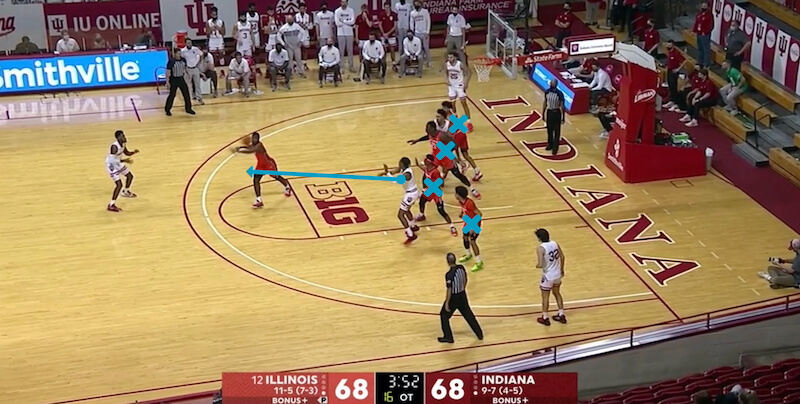 Indiana tries another ball screen, but this time Thompson slips it. As he does this, Jackson-Davis moves towards the left short corner: 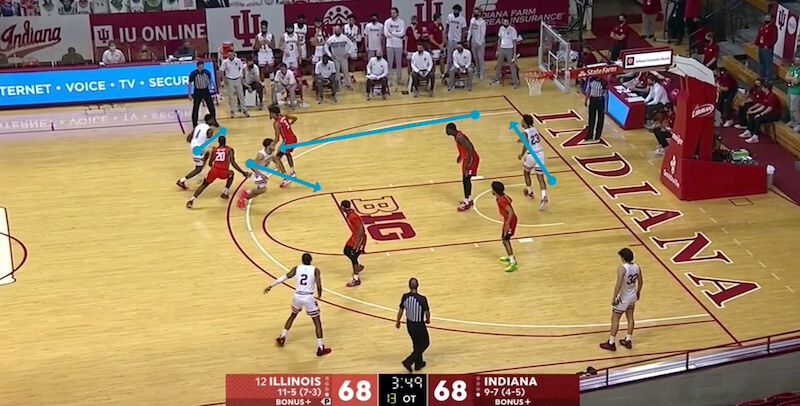 Illinois opts to switch on the screen here with Grandison moving to Durham and Da’Monte Williams chasing Thompson on the roll. Curbelo has also come way off Galloway in the corner to give extra help on the roll. Cockburn lingers a bit too long in the paint and Williams instructs him to get out on Jackson-Davis as Durham makes the pass: 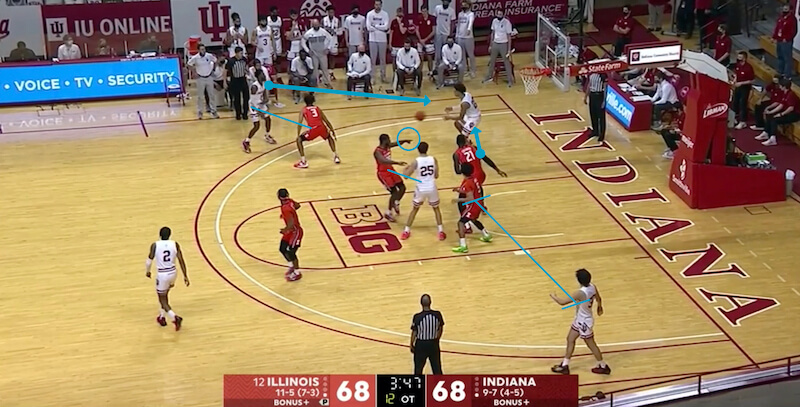 Jackson-Davis tries going baseline as Grandison and Curbelo play off their men quite a bit to give more attention down low. Williams has Thompson fronted in the paint: 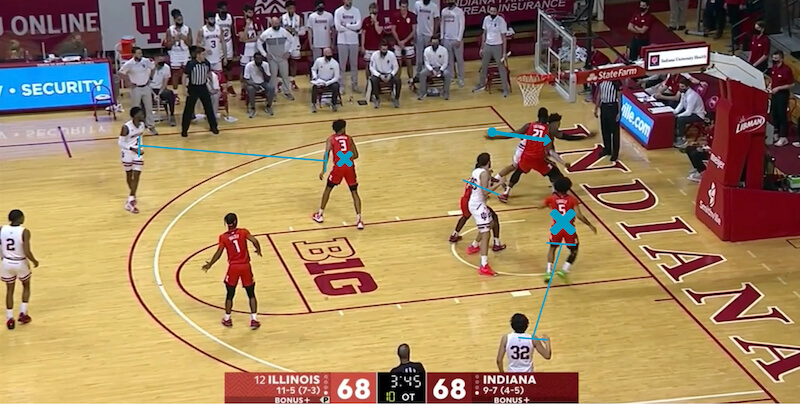 As Jackson-Davis moves to the paint, four Illinois defenders are near. Grandison loses Durham a bit during Jackson-Davis’ move and there’s probably an opportunity for a kickout: 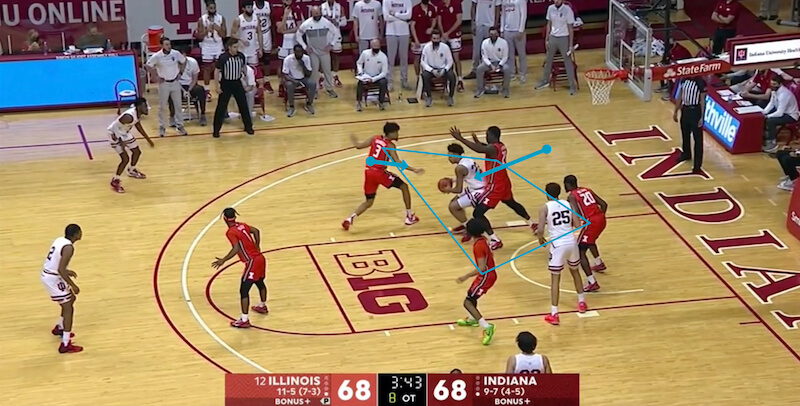 But Jackson-Davis keeps moving and supermans up a shot around Cockburn with Curbelo near: 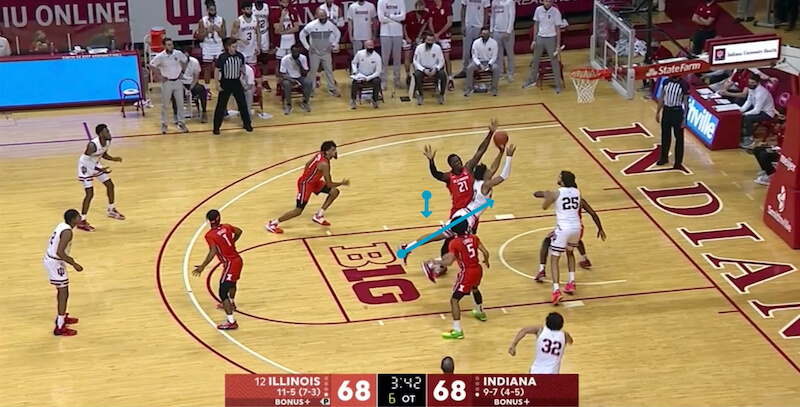 It doesn’t fall. Galloway seems to have the rebound, but he ends up kicking it away, one of those plays Archie Miller referenced after the game: 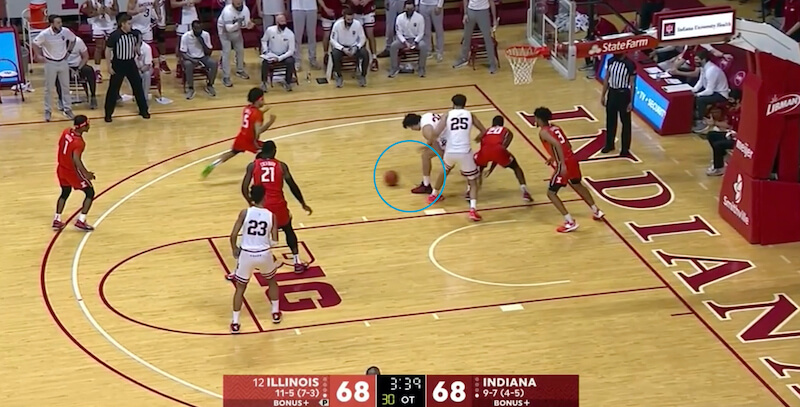 More switching and sticking to the same pick-and-roll principles for Cockburn and the Illini here helped shut down drives. With Curbelo not too worried about Galloway, a non-shooter, in the corner, it also allowed for extra attention in the paint on Jackson-Davis, who was already having a tough time against Cockburn in this one.