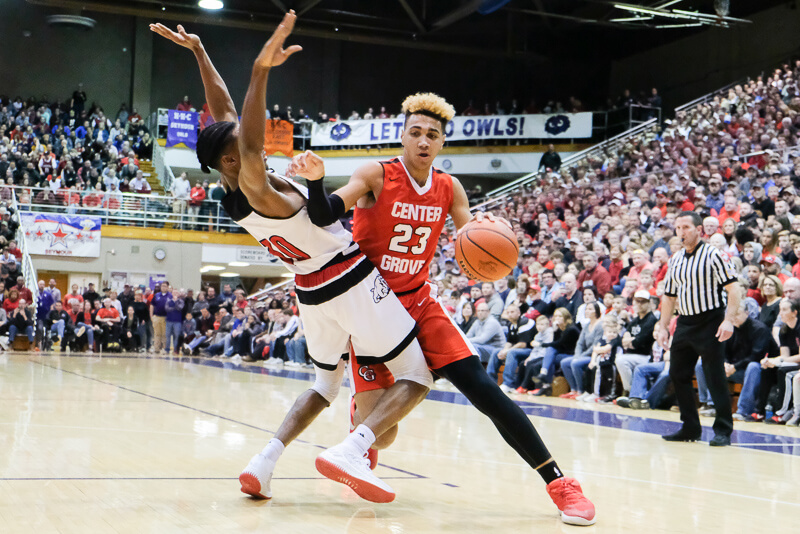 In an eventful week for Indiana, the team responded to a bludgeoning with a close win at home, picked up another big commitment, and held firm in the Big Ten standings. So much remains unknown about this IU squad, but we’re here to try and figure it out.

Five-star forward Trayce Jackson-Davis, a big man out of Center Grove High School in Indiana, announced his commitment to Indiana Friday afternoon, giving Archie Miller and his staff another solid in-state recruit in the 2019 class.

He’ll join fellow 2019 recruit Armaan Franklin next year in Bloomington. The two commits faced off against one another on Friday night at Center Grove, and both Franklin and Jackson-Davis discussed the game and their relationship after the contest.

Jackson-Davis, despite lacking high-end size, is unusually skilled and versatile for a big man.

Already 230 pounds, the lefty has a size and strength advantage over nearly every high school center he faces, and will likely be able to overpower many college power forwards. He can put the ball on the deck and pass, though likely isn’t comfortable enough to serve as a primary initiator or offensive catalyst. He’s crafty inside, with hooks and fakes that can keep defenders off balance.

Still, Jackson-Davis tends to float in some games, and doesn’t always dominate inside the way his size might suggest. In Friday’s game against Cathedral, he showed little interest in defending outside the paint and struggled to consistently assert himself on both ends of the floor (though he did reject Franklin twice late in the game).

He likely won’t be a one-and-done college player, and may not be the best player in his recruiting class. But that fact alone speaks to the talent Indiana will have on its roster next season, and Jackson-Davis will play an important role somehow or another.

For more on Jackson-Davis’ game, Inside the Hall has compiled his best high school footage.

Note: Be on the lookout for a special edition of The Matchup in the Podcast on the Brink feed later today. I interviewed Sam Vecenie about the draft prospects on Indiana’s roster, and Trayce’s name came up toward the end of the episode.

The game was closer than fans and analysts might have expected, but Indiana pulled out a late-game victory against Northwestern Saturday afternoon in Simon Skjodt Assembly Hall.

After Morgan left the game with 3:30 to play in the second half, Langford took over down the stretch, scoring two crucial baskets and making key defensive plays to help IU secure the win. His defensive effort on Vic Law in the second half was the best he has looked on that end all season, and his all-around game was the best of his Indiana career.

Inside the Hall and the Assembly Call have you covered on postgame analysis, with takeaways from the game, player and coach reactions, instant analysis, postgame emails, and in-depth postgame shows.

Where does IU stand in early December?

With another (close) win under its belt, Indiana improves to 6-2 on the season. Still, with one conference game over with and another 19 to play, the Hoosiers probably aren’t at the level most envisioned they’d be this time of year.

With so much of the season left to play and the team still learning how to play with one another, there is plenty of time for Indiana to cover the ground it needs to cover by the end of the year.

But the last two games have shown just how far Indiana needs to go. The Duke game wasn’t close, and a good team should defeat Northwestern by more than a single basket. Given how Michigan, Maryland, Wisconsin, and the rest of the conference are playing, Indiana won’t be able to walk through many more games. The schedule promises to get difficult.

Winning on the road and handling athletic, pressuring teams has been challenging for IU, though ball-movement, defense, and inside scoring have all shined at moments. Only four more non-conference games loom, two of which will pose legitimate threats to add a third loss to Indiana’s total.

For the time being, however, two isn’t a bad number.

Recent episodes of Podcast on the Brink and The Assembly Call covered what we’ve learned about Indiana thus far into the season.

Michigan, Maryland, Wisconsin, Michigan State, and Indiana all won their first conference games of the season, with Nebraska, Ohio State, Illinois, and Minnesota all to play on Sunday. Michigan was particularly impressive, trouncing Purdue 76-57 at home behind strong efforts from Jordan Poole and Jon Teske. If the Wolverines continue playing at this rate, everyone else is playing for second.

But with every other Big Ten team having at least one blemish on its record this season, Indiana remains very much in that hunt for second at the moment. It’s still early, but no team has separated itself from the pack in the way that Michigan has.

The coming weeks will be telling, and an opportunity for the Hoosiers to create separation for better or for worse.

Victor Oladipo is set to miss an indefinite period of time with a sore right knee, the Pacers announced this week. Oladipo was on track for another All-Star appearance, averaging 21.4 points, 6.6 rebounds, and 4.7 assists on 44 percent shooting. The Pacers currently sit at 13-9 and are 3-3 without their All Star.

Eric Gordon remains cold from 3-point range as the Rockets stumble through the early parts of the season. With Chris Paul sidelined, Gordon is being asked to play more of a leading role next to reigning MVP James Harden, and his shooting percentages have reflected overextension on his part. His 2-point shooting, which hit a career-high rate last season, has regressed over 10 percentage points. Houston needs something to vault it back to the elite level it reached a season ago, and a turnaround from Gordon would be a useful place to start.

Despite shifting to a bench role after the arrival of Kawhi Leonard and Danny Green, OG Anunoby is playing more minutes and a larger role for the Toronto Raptors this season. Anunoby’s long-distance shooting has fallen off to start the year, but he’s being more aggressive inside the arc and creating slightly more offense for himself than he did a year ago. The Raptors are betting on a shooting improvement sometime before April, when Anunoby figures to play a central role in what could be a long and fruitful playoff run.

We should be wary of overreacting to any Troy Williams stint in the NBA, as all have thus far resulted in trips back to the G-League or free agency, but Williams has been surging over the last 11 games for the not-terrible Sacramento Kings. The third-year wing is averaging over 15 minutes and six points per game and has helped hold together some wacky and fun Kings bench units. Sacramento’s ludicrous-speed pace fits Williams well, as he thrives on slashing to the lane and shooting without much restriction.

Cody Zeller left the Hornets’ game against the Utah Jazz Friday night with a left rib contusion and is listed as day-to-day. Zeller, who has missed significant time due to injury over the last two seasons, had been averaging over nine points and five rebounds in 22 games – all starts – and Charlotte has outscored opponents by nearly five points per 100 possessions with him on the floor. Surely all parties are hoping for a speedy recovery.

The IU men’s soccer team defeated Notre Dame on Friday to earn yet another College Cup appearance – the 20th in the program’s history. The Hoosiers will take on Maryland on Friday, December 7 in Santa Barbara, CA for a spot in the national championship game.