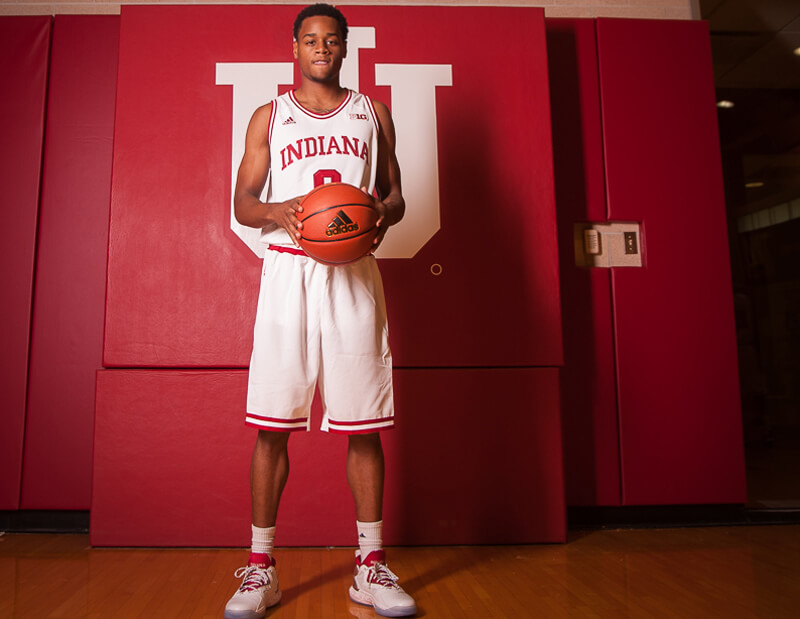 With the start of college basketball season on the horizon, we’re taking a long look at the conference at large as well as Indiana’s roster this month. Today, we continue our look at Indiana’s roster with Curtis Jones.

IU could take a committee approach to its point guard position this year and that might give freshman combo guard Curtis Jones a chance to contribute right away.

Robert Johnson, Josh Newkirk and James Blackmon Jr. are expected to split a majority of the responsibilities, but with Yogi Ferrell and Nick Zeisloft gone, IU will turn to Jones and freshman Devonte Green to round out the backcourt rotation.

Jones already has familiarity with two of his IU teammates. He’s known Johnson since he was nine years old and also played at Huntington Prep alongside Thomas Bryant. That has likely made his adjustment easier both on and off the court.

As the No. 84 recruit in the final 247Composite rankings for the class of 2016, Jones has a strong national profile. But with what IU returns in its backcourt, he could be flying under the radar. His ability to penetrate, knock down outside shots and generate opportunities for others could earn him a rotation spot right away.

If Jones can score and prove to be an offensive threat right off the bat, the rest of his game will develop as the season progresses. He excels in an uptempo, transition style of play that fits right in with IU’s sometimes position-less offense. A challenge for him will be bringing other factors of his game up to the same speed as his sharp shooting. Ball handling should be part of his improvement.

The Richmond, Va. native was one of the three freshmen who spent the summer on campus at IU going through workouts, getting acclimated with the team and learning from the older guys. You can tell it made a difference.

@ctj_curt Someone's been in the weight room in Bloomington…?? pic.twitter.com/bqvGaB34vj

Bottom Line: It’s worthy to note Blackmon is returning from a season ending injury, Newkirk had to sit out last season after transferring and Johnson also missed some time at the end of the year with an ankle injury. Jones might not come in with the most experience, but he’s fresh and is buying into what Crean emphasizes. He can easily crack into rotation among IU’s guard-heavy roster with his ability on offense

Quotable: “Last year they [the Hoosiers] played an exciting style of basketball and I feel I fit into their system where I can play either on or off the ball,” Jones said. “The tradition of Indiana, along with Coach Crean’s plan for me to develop over time…The fan base is also definitely one of the best in the country.”