Committee approach key to adjusting to life without Yogi 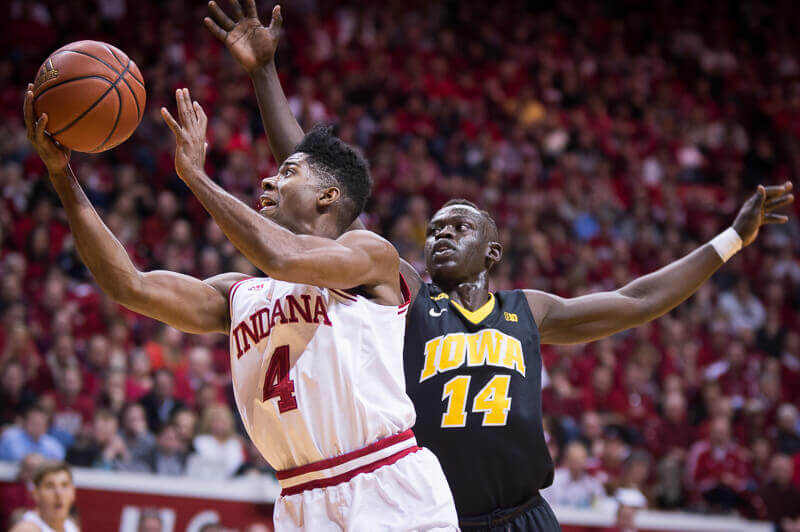 WASHINGTON – Indiana will look much different in the backcourt this season.

For the first time since the 2011-2012 season, someone other than Yogi Ferrell will be the primary ball handler.

But will the Hoosiers have one player who commands the position or will it be more of a “by committee” approach? At Thursday’s Big Ten media day at the Marriott Wardman Park, Tom Crean and IU players talked as if the latter is the more likely scenario.

“I don’t think this will be a team that you’d look at and say ‘Ok, it’s going to be one guy that’s setting the offense, one guy that’s getting us into the shot clock,'” Crean said at a roundtable session with reporters. “To me, the point guard position is the one that gets the ball on a made basket, gets the ball up the court the best through the drive or through the pass, can get to the basket, can make a pull-up, can play in the ball screen, can create for somebody else quickly, especially the trail position, and can make 3s. And so, it’s getting a team of guys that can get as good as they can at that.”

On paper, it appears the Hoosiers have the personnel to accomplish what Crean has laid out, even without one guy carrying the majority of the responsibility that Ferrell did.

Guard depth was a problem at times last season after James Blackmon Jr. went down with a knee injury and when Robert Johnson suffered an ankle injury late in the season.

Depth could actually be a strength this year with both Blackmon Jr. and Johnson at full strength, the addition of Pitt transfer Josh Newkirk and the arrival of freshman guards Devonte Green and Curtis Jones.

The ball movement piece is a key ingredient for Indiana’s offensive success.

Only once in the last five seasons have the Hoosiers finished with an offense ranked outside the top eight nationally, according to KenPom.com. Much of that success has come as a result of ball movement, spacing and perimeter shooting.

“Ball movement is the key, having five players that can move the ball, that can score,” Crean said. “I think with a team like this, the guys who are considered inside guys are pretty good away from the basket and the guards are pretty good around the rim. That’s the key.”

Beyond Ferrell’s numbers, many of his teammates will also have to adjust to being on the floor without him in their Indiana careers.

For Blackmon Jr. and Johnson, who have started alongside Ferrell their first two seasons, it will be an adjustment.

“I think we’re going to have to raise our level (of play) for the other things that he (Yogi) brought like the defense and leadership,” Johnson explained. “I think that’s where everybody is going to have to focus a lot.”

The presence of a player like Ferrell isn’t easy for any team to replace.

Thumb through this year’s record book for the program and Ferrell’s name is at the top of the list for both assists and games played.

“The biggest thing you miss about him is the feeling that he’s there,” Crean said. “There was a presence of Yogi. It all goes under that umbrella: the talent, the toughness, the durability, the playmaking, that spirit that he had.

“And with that comes a lot of confidence from your teammates that he’s there. They’ve got to get that from each other now. I don’t think you look at one guy and say, he’ll take care of it.”