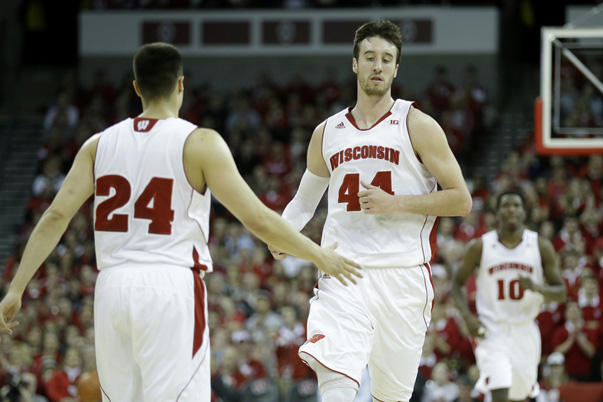 The Inside the Hall Big Ten Power Rankings are back for another week as just one team now remains winless in conference play and four are within one game of first place in the league standings.

Here’s a look at where each team stands following the third week of play in 2015:

14. Penn State (12-6, 0-5, PPP: 1.00, PPP Allowed: 1.13) (Last week: 14) … An already bad week for the Nittany Lions got worse on Sunday after it was revealed they turned down at least 30 people at ticket counters before Saturday’s game against Purdue, even though it was nowhere near sold out. The week started with the announcement of the suspension of John Johnson and continued with two losses to Indiana and the Boilermakers, and the Nittany Lions now find themselves as the lone winless team in Big Ten action. (Next up: Jan. 21 at Michigan State; Jan. 24 vs. Rutgers)

13. Northwestern (10-8, 1-4, PPP: .97, PPP Allowed: 1.07) (Last week: 13) … The Wildcats found themselves in two close games this past week, battling back against Illinois late and with a second-half lead at Michigan. Both times, though, they did not have the late-game playmaking to prevail. And in a league as unforgiving as the Big Ten is, close losses aren’t going to cut it. Perhaps one positive they could take from the four league losses is that they are playing so competitively despite such poor efficiency numbers. (Next up: Jan. 22 vs. Ohio State; Jan. 25 at Maryland)

12. Minnesota (12-7, 1-5, PPP: 1.05, PPP Allowed: 1.09) (Last week: 12) … Well, the Golden Gophers finally got their first Big Ten win. Granted, it was against a Rutgers squad that has struggled away from Piscataway thus far in conference action. But nonetheless, the Gophers have a game in the win column to their name. They nearly beat Iowa, too, after making a late second-half comeback only to have their hopes dashed by Jarrod Uthoff in the final seconds. One thing the Gophers will have to get settled, though: Despite having one of the nation’s top effective height margins, they are allowing opponents in conference play to rebound more than 37 percent of their misses — the worst mark in the Big Ten. (Next up: Jan. 20 at Nebraska; Jan. 24 vs. Illinois)

11. Rutgers (10-9, 2-4, PPP: .93, PPP Allowed: 1.00) (Last week: 11) … After last week’s huge win over Wisconsin, the Scarlet Knights had a less successful two games this past week with losses to both Maryland and Minnesota on the road. They’ve yet to win a conference road game in their three attempts this season. But the Scarlet Knights gave the Terrapins plenty of trouble and kept the scoreline respectable in Minneapolis, a sign they can certainly be competitive in the Big Ten this season. (Next up: Jan. 20 vs. Michigan; Jan. 24 at Penn State)

10. Illinois (12-7, 2-4, PPP: .97, PPP Allowed: 1.04) (Last week: 10) … Life without Rayvonte Rice continues for the Fighting Illini, and sophomore Kendrick Nunn has filled at least the scoring void — putting up 49 points in their two games this week. But as a team in both games against Northwestern and Indiana, the Illini struggled to defend. Offensive consistency pushed them toward a win against the Wildcats in Evanston. But against the Hoosiers, the offense was streaky. And with the defense once again lacking, its inconsistent offense let them down late for their first loss in the State Farm Center this season. (Next up: Jan. 21 vs. Purdue; Jan. 24 at Minnesota)

8. Michigan (11-7, 4-2, PPP: .98, PPP Allowed: 1.00) (Last week: 7) … On Sunday afternoon the Wolverines’ worst fears were realized when it was announced junior Caris LeVert is out for the season with a foot injury sustained in Saturday’s 56-54 escape over Northwestern. Just how big of a loss is LeVert? The 6-foot-7 forward led the Wolverines in points, rebounds, assists and steals this season. That’s a lot of production to make up for with just one junior (and no seniors) now available to play. (Next up: Jan. 20 at Rutgers; Jan. 24 vs. Wisconsin)

7. Purdue (11-7, 3-2, PPP: 1.03, PPP Allowed: 1.01) (Last week: 8) … Finding a way to win is important in the Big Ten, and the Boilermakers did just that under the odd circumstances of Saturday’s game against Penn State in State College. They found themselves trailing by three and at the free throw line with less than 15 seconds to go, but after two misses and an offensive rebound, Kendall Stephens nailed a 3-pointer to send the game into overtime. They would go on to win easily from there, 84-77. The Nittany Lions are not the great opponent to gauge progress on, but nonetheless any road win in this league shouldn’t be taken lightly. (Next up: Jan. 21 at Illinois; Jan. 24 vs. Iowa)

5. Michigan State (12-6, 3-2, PPP: 1.06, PPP Allowed: .99) (Last week: 3) … They barely escaped Northwestern in overtime last Sunday, and almost a week later on Saturday, the Spartans had little fight in them in a blowout loss to Maryland in College Park. It was their second loss to the Terrapins in as many games, too, as they went a dismal 3-for-17 from beyond the arc while allowing Maryland to shoot better than 52 percent on their 3s. Since their 14-point win at Iowa, well, the Spartans have just looked inconsistent. (Next up: Jan. 21 vs. Penn State; Jan. 24 at Nebraska)

4. Indiana (14-4, 4-1, PPP: 1.04, PPP Allowed: 1.06) (Last week: 5) … Already very thin up front, the Hoosiers received bad news on Tuesday as it was revealed 6-foot-9 starter Hanner Mosquera-Perea will be out indefinitely — a reported two to four weeks — with a knee injury sustained in practice. And against Penn State on Tuesday, the Hoosiers allowed 13 offensive boards and narrowly escaped with a win. But on Sunday in Champaign, the undersized Hoosiers out-rebounded the Fighting Illini with their tallest player on the court at 6-foot-8, and they now find themselves in the thick of the Big Ten race in the midst of a tough stretch. (Next up: Jan. 22 vs. Maryland; Jan. 25 at Ohio State)

3. Iowa (13-5, 4-1, PPP: 1.15, PPP Allowed: 1.10) (Last week: 4) … Despite blowing their double-digit second half lead at Minnesota on Tuesday, the Hawkeyes stayed tough and managed to pull out a win in “The Barn,” their first since Jan. 4, 2012. And they took care of business on Saturday against the Buckeyes at home, too. As one of the biggest teams in the nation, the Hawkeyes have played to their strengths thus far this conference season: They are getting to the line at the best rate in the league (61.2 percent free throw rate) and are getting plenty of their points at the line — in addition to a 52.8 percent 2-point field goal percentage in conference play, second best out of the 14 teams in the league. (Next up: Jan. 20 at Wisconsin; Jan. 24 at Purdue)

2. Wisconsin (16-2, 4-1, PPP: 1.23, PPP Allowed: 1.04) (Last week: 2) … After last week’s debacle in New Jersey, the Badgers had Frank Kaminsky back in action on Thursday and breezed to a 15-point win against Nebraska in Madison. And in 34 minutes of action, the 7-foot senior’s impact was clear — he scored 22 points, had five rebounds (three offensive), two assists and two blocks. If he can continue to stay healthy, the Badgers should continue to win. (Next up: Jan. 20 vs. Iowa; Jan. 24 at Michigan)

1. Maryland (17-2, 5-1, PPP: 1.00, PPP Allowed: .90) (Last week: 1) … With each passing game, the target on Maryland’s back grows in their first season in the Big Ten. They have reached a top 15 ranking and were put in the national spotlight with a CBS game on Saturday against Michigan State. And after a close call against Rutgers earlier in the week, the Terrapins took care of business and then some against the Spartans. They scored at a 1.23 points per possession rate and appeared to be a far superior opponent, as freshman Romelo Trimble led the way once again with 24 points on 6-of-11 3s. Much of the preseason Big Ten Freshman of the Year talk had been focused on Indiana’s James Blackmon Jr. and Ohio State’s D’Angelo Russell — but arguably no player has had an impact on his team like Trimble has had at Maryland. (Next up: Jan. 22 at Indiana; Jan. 25 vs. Northwestern)