Hoosiers emerge victorious after ‘punch after punch’ battle in Champaign 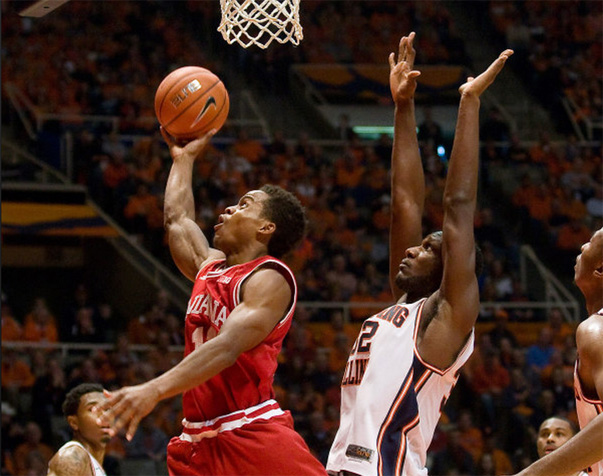 Illinois was in the midst of a 21-2 run midway through the second half against Indiana on Sunday, turning a 10-point deficit into a nine-point lead. Hoosiers coach Tom Crean had called a timeout to settle his team.

In what had been a game of runs on Sunday, the Fighting Illini had the edge heading into the final 10:54 of the game. But the Hoosiers battled back.

“Both teams just kept fighting back, throwing punch after punch,” Illinois coach John Groce said. “It was a high-level game.”

The first “punch” was thrown in the opening minutes of Sunday afternoon’s game, as Illinois raced to a 14-3 lead. Kendrick Nunn, who scored 24 points for the Illini, opened with three straight 3-pointers. Ahmad Starks added another, his first of five, to put the Illini up by 11.

But the Hoosiers countered. They found open looks. Off the bench, junior Nick Zeisloft hit two 3s. Freshman Emmitt Holt recorded an offensive rebound and putback. Freshman Max Hoetzel drained a 3-pointer and recorded a steal. Not only had the Hoosiers tied the game, they had taken the lead, as well.

“Our guys, we played with confidence,” Crean said. “We couldn’t come in here and feel that we could not win the game.”

That lead had been stretched to 11 points — a 34-23 margin — thanks to seven straight defensive stops. The Hoosiers were playing with toughness — 6-foot Yogi Ferrell even out-rebounded 6-foot-11 Nnanna Egwu on a loose ball.

“It was a game of runs,” Groce said. “Ridiculous runs.”

But that’s when Illinois went on the game’s largest run, outscoring the Hoosiers, 21-2, from the 15:38 mark to 10:54 mark of the second half. The Hoosiers hadn’t made a basket in more than six minutes.

After Malcolm Hill had stolen a Troy Williams bounce pass and had taken the ball for a layup in transition, Crean called a timeout. He noticed, though, his players still appeared optimistic.

“I thought our attitude was great,” Crean said. “I didn’t think we got down.”

Out of the timeout, Crean put sophomore Collin Hartman into the game. Less than a minute later, Hartman shot a 3-pointer from the right wing. Hartman back-tracked before the shot even went through the net. The Hoosiers were alive, once again.

After a Holt layup, a James Blackmon Jr. 3-pointer and three free throws off a missed Blackmon 3-pointer, the Hoosiers had cut the Illini lead to just one. Illinois, though, had rebuilt the lead to five with just 3:20 left after Nunn’s sixth and final 3-pointer.

But as the record-setting State Farm Center crowd of 17,085 once again reached a fever pitch, Zeisloft hit another 3-pointer. An IU stop on defense and a Williams tip-in on the following possession, and the Hoosiers had a lead. They wouldn’t relinquish it.

At the other end of the floor, Ferrell would tip a Hill pass and would dish it to Blackmon for a layup in transition. The Hoosiers hit 5-of-6 free throws and forced three Illini misses in the waning seconds to finish the win. The game ended on a 13-2 Indiana run.

“It was a matter of them making plays we didn’t make,” Groce said.

For the Hoosiers, who are now just one of four teams in the league with just one loss in conference play (along with Iowa, No. 14 Maryland and No. 7 Wisconsin), Sunday’s victory matched last season’s entire win total on the road.

This one, though, was a battle. A game of back and forth runs.

And while the Hoosiers have been unconvincing toward the end of games lately, there was no doubt in the closing seconds on Sunday.

“When you’ve got guys that can score, that’s easier said than done,” Crean said. “But they did it.