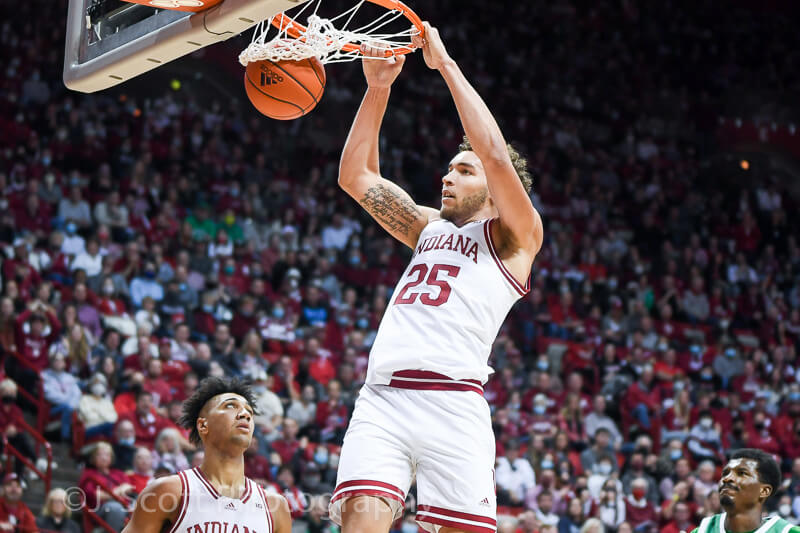 While the news for Indiana basketball was not quite as big as last week when the schedule was released, there were nonetheless some noteworthy items to come up from the preceding days. Joining what several other big-time programs have done, IU announced an upcoming pro day to coincide with the weekend of Hoosier Hysteria.

Also, the hype and pressure continue to build as two more preseason publications picked the Hoosiers to win the Big Ten. Looking further off into the future, IU’s top remaining target for 2023 has announced the final four schools he is considering and the Hoosiers made the cut. Also, Assembly Call had new shows on Wednesday and Thursday.

Outside of basketball, it was a really good week for IU athletics in general with solid wins in several sports.

It has been known for weeks that Hoosier Hysteria would be on Friday, October 7. However, that is not the only big-time event to take place for IU basketball now on that date as a Pro Day will take place a few hours earlier.

This has been done by several top schools in the last few years and the cream and crimson are now joining in on doing it. There will be invites for all 30 NBA teams to have scouts in attendance. Star center Trayce Jackson-Davis is the obvious candidate for a career in professional basketball but a few others including Tamar Bates, Jordan Geronimo, Jalen Hood-Schifino, and Malik Reneau could also play beyond college.

Despite the tough schedule released last week, two more preseason publications picked the Hoosiers to come in first in the conference joining several others that have hyped up the team for 2022-2023. The two sources to do so were the Blue Ribbon College Basketball Yearbook and Lindy’s Sports and both named Trayce Jackson-Davis as the player of the year in the Big Ten.

Despite so many picking the cream and crimson to be the best team in the league, Inside the Hall’s William McDermott looks at how realistic this is given IU’s schedule is harder than other competitors.

After several high-profile recruiting misses for 2023, the Hoosiers are down to one top target in big man Arrinten Page. While IU seemed like the front runner for him for weeks, three other schools (Cincinnati, Miami (FL), and USC) may have closed the gap.

Page announced he is considering all four and should make his decision soon. IU has two recruits for 2023 already with Gabe Cupps and Jakai Newton and may turn to the transfer portal for more regardless of Page’s decision. This is because several players (Xavier Johnson, Miller Kopp, and Race Thompson) will graduate after 2022-2023 and will exhaust their college eligibility. Also, Trayce Jackson-Davis is likely to head to the NBA with a degree in hand.

Assembly Call had two new shows this week with both an Assembly Call Radio episode Thursday and Doing the Work on Wednesday. AC Radio discussed recruiting and took a detailed look at all the Big Ten coaches.

Meanwhile, Doing the Work had a special guest in Amanda Foster to talk about last week’s schedule release. Foster, who plans to increase women’s basketball coverage for Inside The Hall for this upcoming season also had an article Tuesday on the site about the three impact transfers (Alyssa Geary, Sydney Parrish, Sara Scalia) joining the team.

It looked bleak for a while, but the Hoosiers picked up a nail-biting overtime win against Western Kentucky to improve to 3-0 and get halfway to bowl eligibility. They also passed last season’s total victories despite some ugliness in the first three weeks of the season.

Football was not the only IU team to have a successful week as baseball, field hockey, men’s soccer, volleyball, and women’s soccer were also victorious in the last few days.

• Men’s soccer got its first win at the Butler Bowl in Indianapolis in 11 years knocking off a ranked Bulldogs team 2-1. They also moved around a few contests later in the season to accommodate the rescheduling of a previously rained-out game against Notre Dame.

• Baseball brought back its dominating offense from last season to overwhelm Eastern Illinois in a fall exhibition game.

• Volleyball picked up victories in two of their three matches this week.

• Wrestling added a coach to the staff.