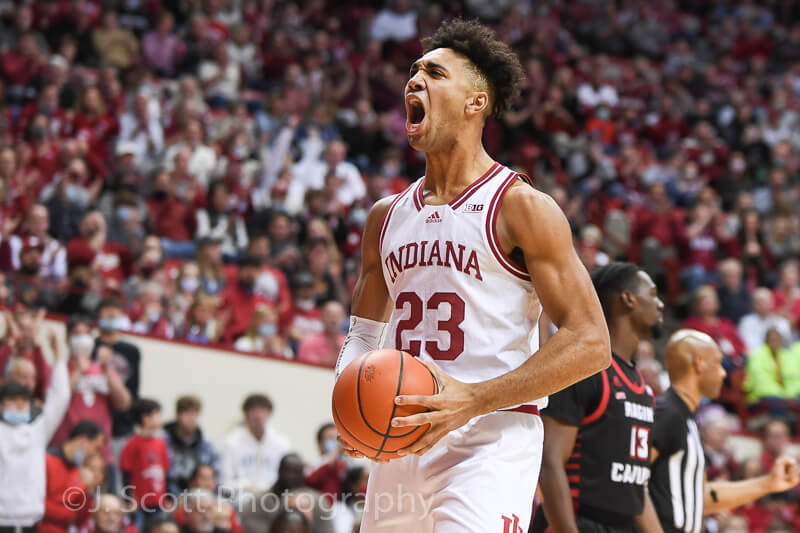 BLOOMINGTON, Ind. – The Indiana men’s basketball program will hold its first ever Pro Day Friday, Oct. 7. The pro-style combine workout will take place early in the afternoon. The team will make its first public appearance, along with the women’s team, that evening at Hoosier Hysteria Presented by Smithville. The event is part of Homecoming Weekend. Representatives from all 30 NBA teams will be invited.

“I think it will be a great opportunity for the players in our program,” said Woodson who was a head coach for nine years in the NBA with Atlanta and New York. “All of them aspire to play at the highest level.”

The Hoosiers are led by Preseason All-American forward Trayce Jackson-Davis. A bout with COVID led to the Greenwood native being unable to participate in the NBA combine earlier this year. The former Indiana Mr. Basketball winner ranked among the Big Ten leaders in points per game (18.3; 6th in the Big Ten), rebounds per game (8.1; 6th), field goal percentage (58.9%; 4th), free throws made (147; 5th), free throws attempted (218; 2nd) and total blocked shots (81, t-1st) in 35 starts for the Hoosiers in his third season on campus.

All-Big Ten selections senior guard Xavier Johnson and senior forward Race Thompson also return. Johnson finished second on the team averaging 12.1 points and led the team in assists (172, 3rd in the Big Ten) and steals (40) and was second on the team in 3-point shooting (38.3%). Thompson was third on the team averaging 11.1 points and second in rebounding (7.5) and field goal percentage (53.6%). He was seventh in the league in rebounding in conference games. Senior wing Miller Kopp is back after shooting 36.1% from long distance a season ago

Junior forward Jordan Geronimo possesses next-level athleticism and opened eyes with his career-high 15 points and added seven rebounds, an assist and a block against Wyoming in the NCAA First Four. Sophomore guard Tamar Bates returns for his second season and was the No. 23-rated recruit in the country by ESPN.com. Junior wings Trey Galloway and Anthony Leal both are back for their third season and sophomore center Logan Duncomb is back for his second year.

IU boasted the fifth-best recruiting class in the country according to 247Sports. Guard Jalen Hood-Schifino and forward Malik Reneau join the Hoosiers from two-time GEICO National Champion Montverde Academy (Florida). Hood-Schifino, a prep All-American was ranked 17th by Rivals.com, 22nd by 247Sports, and 24th by ESPN. Reneau, another prep All-American was ranked as the 22nd best player in the recruiting class by ESPN.com, 25th by Rivals.com and 27th by 247Sports.com. Forward Kaleb Banks was the Georgia 4A Player of the Year last year and was ranked 78th by ESPN, 84th by 247Sports. Wing CJ Gunn is an Indiana All-State performer from Lawrence North High School and was ranked 170th by 247Sports.

Last year, IU had the top-rated defense in the Big Ten according to KenPom (22nd, nationally). IU also led the Big Ten in field goal percentage defense at 39.6% and finished second in blocked shots at 4.83 a game.