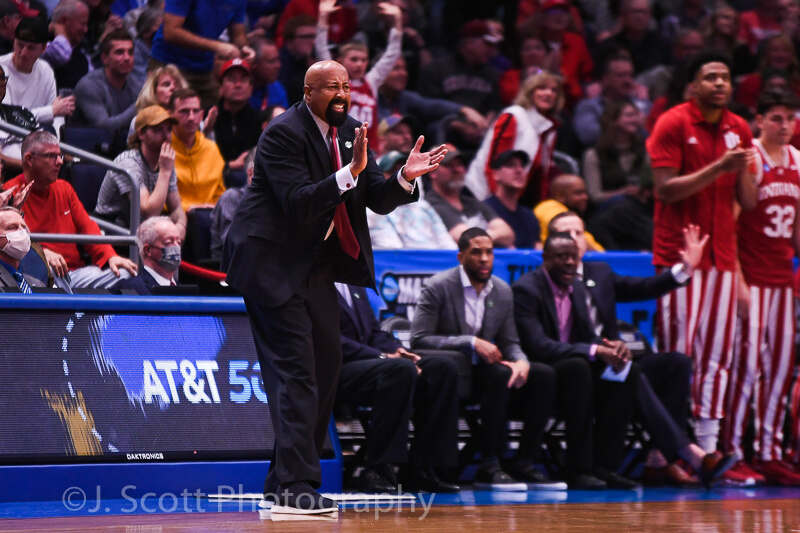 “I think it’s extremely important for our program that we continue to build on what we were able to accomplish this season and my first priority was to heighten the roles of Kenya and Yasir and allow Brian to broaden his responsibilities with an on-floor coaching role,” said Woodson. “I like the direction we are headed and appreciate their efforts and collaboration in helping the Indiana University basketball program reach its full potential.”

In Woodson’s first season, the Hoosiers made their first NCAA Tournament appearance since 2016, reached the Big Ten Tournament semifinals for the first time since 2013 and finished as the top-rated defense in the Big Ten according to KenPom at 22nd in the country.

Walsh will begin his sixth year with the program. He was Team and Recruiting Coordinator this past season after serving four years as the team’s Director of Basketball Operations.

Prior to IU, Walsh spent three years at the University of Dayton where he served as the Assistant Director of Basketball Operations for one year and a graduate assistant for two seasons. During his time at Dayton, the Flyers went 76-25, the most wins in a three-year span in program history. While at Dayton, the Flyers advanced to three-straight NCAA tournaments and claimed back-to-back regular-season Atlantic 10 championships in 2015-16 and 2016-17. In the summer of 2015, Walsh earned a master’s degree in educational leadership.

At Dayton, Walsh assisted with every aspect of the program, including underclassman recruiting, on campus recruiting, day-to-day administrative duties, academic services, housing, player services, community relations, and team meals. He served as the director of the program’s Team Camp and had responsibilities related to video, and summer camp operations.

Walsh graduated from the University of Akron in 2012, earning his bachelor’s degree in business administration and thena master’s in sports administration in 2013. While at Akron, he led the Zips and the MAC in three-point field goal percentage as a junior, hitting 44.2% from long distance in league play. Overall, he finished second in the conference shooting 43.4% from beyond the arc.

A two-time academic All-MAC honoree, Walsh shot 40.9% from three-point range during his collegiate career. He averaged 8.3 ppg as a junior and 7.2 ppg as a senior captain, helping the Zips to 48 wins in two seasons and securing a regular-season and conference tournament championship in 2013 and a trip to the 2013 NCAA Tournament.

Before transferring to Akron, Walsh was a member of Xavier University’s basketball team from 2008-2010 where they advanced to back-to-back Sweet Sixteens.

A native of Moon Township, Pa., Walsh averaged 19.7 points, 7.6 rebounds, and 2.5 assists as a senior at Moon High School and was named Gatorade Player of the Year in Pennsylvania in 2008.

“Brian is someone who made a tremendous impact very early on in my tenure and I believe he is someone who can help continue the positive progress that is being established at IU. In our collaborations as a staff, I continue to be impressed by his contributions and I think he will flourish in his new role.”

“I’m honored that Coach Woodson has given me this opportunity. My career goal has always been to become a coach, but the experiences I have learned since getting into to the profession have been invaluable. I’m looking forward to this next chapter and continuing the path that he has set for our program and will work tirelessly Coach Woodson.”

A 20-year veteran of Division I coaching, Kenya Hunter will begin his third year with the Hoosiers.

The native of Arlington, Va., came to IU after spending two seasons as an assistant coach at UConn. He worked primarily with the Huskies’ big men and had a significant impact, helping center Josh Carlton earn the American Athletic Conference Most Improved Player Award for 2018-19 and developing freshman Akok Akok into one of the nation’s leading shot blockers. He also helped UConn land two consecutive Top 20 recruiting classes.

Hunter came to UConn after spending five years on the coaching staff at the University of Nebraska, which followed extensive coaching experiences at Georgetown, Xavier and Duquesne, as well as basketball administrative experience at North Carolina State. He has been a coach for 12 teams that reached the NCAA Tournament.

Hunter coached big men and wings during his tenure at Nebraska as he helped the Huskers post 22 victories in 2017-18, earning an NIT berth. During his tenure, he also helped Nebraska reach the NCAA Tournament and he was instrumental in the development of All-Big Ten selections Terran Petteway and Shavon Shields. Petteway was a two-time All-Big Ten performer who led the conference in scoring in 2013-14, while Shields finished his career as one of five players in school history with 1,500 points and 600 rebounds.

“Kenya did an outstanding job for us this season and is well deserving of this promotion. He has a tremendous impact on every part of our organization and will have the opportunity to lead his own program in the future.”

“I really like the direction we are going in under the leadership of Mike Woodson. I think our players have really responded to what he brings every day. I’m thankful that Coach has the confidence in me to help us reach new heights.”

Yasir Rosemond will begin his second season at IU. He arrived at IU with more than 15 years of experience as a collegiate coach and was named an assistant coach with the Hoosiers in April 2021.

Furthermore, Rosemond also coached former standout Tajuan Porter, who holds the University of Oregon and PAC-12 record for three-pointers made in a single-season (110) and career (345). Porter, the 2007 PAC-10 Tournament MVP, currently ranks eighth in school history for career field goals made (584) and ninth in career steals (103).

Prior to his three years at Georgia, Rosemond worked at Samford from 2012-14 under former IU assistant coach Bennie Seltzer, after spending the 2010-11 season as an assistant coach at Seattle University under head coach Cameron Dollar.

Rosemond, a graduate of the University of Oregon, made his mark on the collegiate basketball landscape during his five seasons (2005-10) at his alma mater under head coach Ernie Kent. The first two of those years he was Director of Basketball Operations, the latter three serving as an assistant coach.

Before joining the staff at Oregon, Rosemond coached as an assistant for two seasons at Redlands Community College in El Reno, Okla., in 2003-04 and 2004-05. He helped the Cougars advance to the NJCAA championship game during 2004. In his two seasons at Redlands, Rosemond coached three junior college All-America performers – Taj Gray, Brandon Polk and Sylvester Mayes.

As a player, Rosemond was a standout guard at Douglass High School in Atlanta. Highlights of his prep career include earning All-State honors each of final three seasons. He helped lead the Astros to the semifinals of the 1993 Class 4A state tournament.

Rosemond then played at No. 1-ranked Okaloosa-Walton Junior College in Florida for one season during 1995-96 and also attended Butler (Kan.) Community College, where he redshirted during the 1996-97 campaign. While there, he was teammates with future NBA standout Stephen Jackson.

Rosemond moved on to Oregon for two seasons, where he played in 58 career games for the Ducks. He was honored as the recipient of the team’s John Warren Award in 1999, which is given to the most inspirational player on the Oregon basketball team.

Rosemond then enjoyed a four-season professional career in Brazil, playing for teams in Sao Paulo, Mogi das Cruzes and Hebraica.

“Yasir has been an invaluable addition to our staff. His energy and his relationship-building skills have been a big asset to us since the day he came aboard. He’s a well-rounded coach who is going to have the ability to lead his own program one day and brings so much to the table.”

“I’m excited for this opportunity and appreciate the level of belief that Coach Woodson and the University is showing in me. I love the fact that I can come to work every day and learn and am anxious to get started on our preparations for next season.”