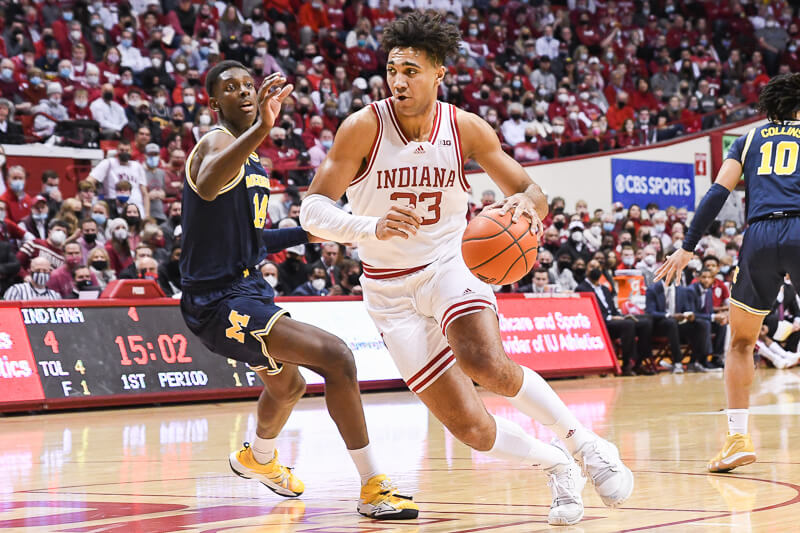 Indiana opens postseason play at 11:30 a.m. ET on Thursday in Indianapolis against Michigan. The Hoosiers and Wolverines will play the first game of session two of the 2022 Big Ten tournament at Gainbridge Fieldhouse.

Michigan won the only regular season meeting between the two teams in Bloomington on Jan. 23. The Wolverines have won nine straight games in the series.

A season full of missed opportunities has Indiana in a must-win situation on Thursday in Indianapolis. The Hoosiers, still on the NCAA tournament bubble in the eyes of many bracketologists, likely need two wins in the conference tournament to get into March Madness.

The draw, on paper, isn’t favorable. The Hoosiers will open the postseason against Michigan, which dominated Indiana in late January in Simon Skjodt Assembly Hall. The Wolverines have owned the series with Indiana in recent seasons with nine straight wins. The winner of Thursday’s game will face top-seeded Illinois on Friday at 11:30 a.m. ET.

Indiana played arguably its worst game of the season against Michigan in Bloomington. Coming off an emotional 68-65 win over Purdue, the Hoosiers were flat from the opening tip against the Wolverines.

“After watching the film again, we did nothing right in that game,” Mike Woodson said Tuesday. “On both ends of the floor. Our defensive coverages were awful. It was one of those games where I just thought we didn’t show up to play.” 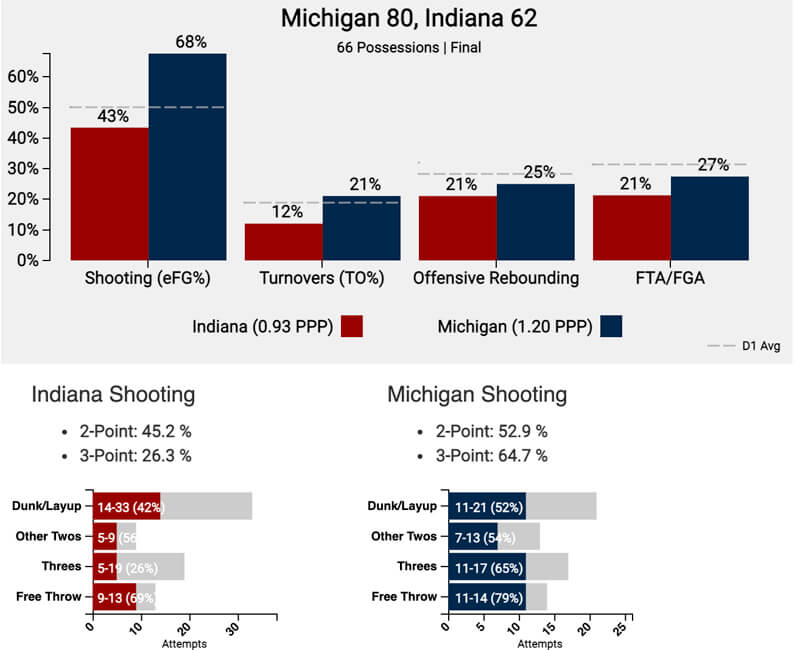 Michigan sophomore Hunter Dickinson dominated in the first meeting, scoring 25 points on 9-of-12 shooting from the field and a 4-of-6 mark from the free throw line. Dickinson showed off his versatility, stepped out to the perimeter and connected on three 3-pointers, which tied his second-highest output of the season from distance.

“I thought he had his way. He was very boisterous about it,” Woodson said. “He came in and had a monster game. You’re not going to beat that team if you don’t slow him down. So we’re going to have to do a better job on him to the point where he can’t dominate like he did. I thought that was the difference.”

As good as Dickinson was, Michigan’s secondary pieces also came to play. Caleb Houstan made five 3-pointers, which he’s only done one other time this season. And Terrance Williams provided instant offense off the bench, scoring 10 points in 13 minutes on 4-of-5 shooting from the field.

Offensively, it was a subpar performance for the Hoosiers.

Trayce Jackson-Davis led Indiana with 17 points, but needed 13 field goal attempts and six trips to the free throw line to get there. Xavier Johnson was Indiana’s best performer with 14 points, six rebounds, six assists, three steals and just two turnovers in 35 minutes. But there were warts in Johnson’s performance as he missed both of his 3-point attempts and three free throws.

(Stats are for conference games only. Numbers are through Thursday’s games.)

Michigan is 4-4 in its last eight games, alternating between wins and losses since falling at home to Ohio State on Feb. 12.

Looking at the Michigan profile, there are a few weaknesses for a team that has legitimate top 15 talent on its roster but hasn’t met expectations. The Wolverines are a below-average defensive team and finished league play with the 11th best defensive in the conference. Big Ten opponents shot 53.1 percent on 2s against Michigan.

Michigan doesn’t get to the free throw line at a high clip, is a below-average 3-point shooting team and doesn’t force a lot of turnovers. The 3-pointers Michigan made in Bloomington – 11 of them – is an outlier for this group. Only 25.3 percent of Michigan’s offense in Big Ten play came from 3s, the lowest point distribution from 3 for any team.

KenPom projects a 2-point win for Michigan and the Sagarin ratings also like the Wolverines by just under two points.

Of all the potential first round matchups for Indiana in Indianapolis, Michigan is the worst. The Wolverines have a dominant big man who has routinely outplayed Jackson-Davis and wings with size who can create offense. Michigan picked Indiana apart in Bloomington which is troubling when you consider how dependent the Hoosiers are on their defense to win.

To beat Michigan, Indiana is going to have to muster up one of its best offensive performances of the season. The last four teams to beat Michigan have scored 1.093, 1.11, 1.259 and 1.266 points per possession.

A win on Thursday for the Hoosiers would mean a shot at top seed Illinois on Friday, which could be a play-in game for the NCAA tournament for IU. A loss would almost ensure a third NIT bid for the program in the past six seasons.