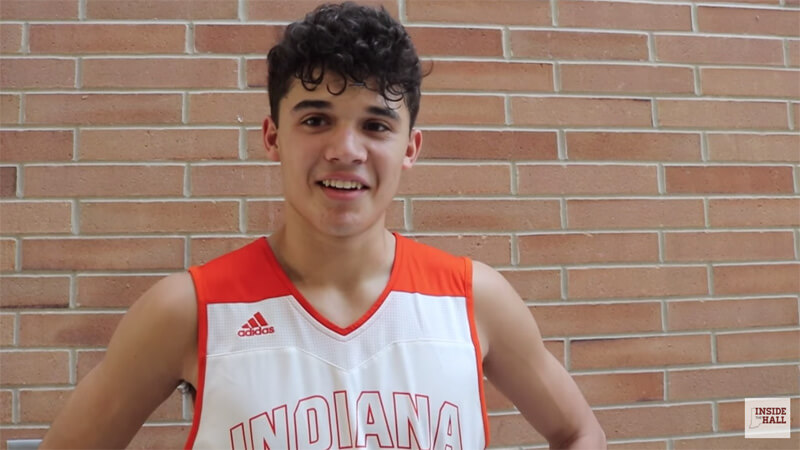 Following the release of our 2020 Indiana basketball recruiting board last week, we took a look Wednesday at the statistical production of several IU recruiting targets playing on the Nike Elite Youth Basketball League (EYBL) circuit.

Today, we’re continuing this series with a look at several of IU’s top targets playing on the adidas Gauntlet circuit.

Currently ranked as the top player in the class of 2021 in Indiana, Lander is playing with Indiana Elite this season after suiting up for the Eric Gordon All-Stars last year.

The Evansville Reitz floor general is averaging 10.9 points, 4.4 rebounds and 2.1 assists per game for the state’s premier adidas grassroots program.

From an efficiency standpoint, Lander’s offensive rating is 93.7, according to Open Look Analytics. He’s using 21.9 percent of Indiana Elite’s possessions and is shooting 56.4 percent on 2s, 29.2 percent on 3s and 55 percent from the free throw line.

Lander’s assist rate is 13.5 percent and his turnover percentage is 22.3, per Open Look Analytics.

The Bloomington South guard is averaging 13.4 points, 3.7 rebounds and 2.3 assists per game thus far on the Gauntlet circuit.

Leal’s turnover percentage is low – just 10.6 – and his assist rate of 14.8 percent is the highest on the Indiana Elite roster.

Residing in IU’s backyard, Leal is a priority recruit for the Hoosiers and his proximity to campus should make it easy for the coaching staff to continue building a strong relationship.

His efficiency numbers are strong nearly across the board as he owns the team’s best offensive rating – 131.8 – despite using the most possessions on the roster (28.6 percent), according to Open Look Analytics.

He’s shooting an ultra-efficient 68.1 percent on 2s, 38.1 percent on 3s and 77.8 percent from the free throw line. He also has a strong assist rate (14.1 percent) when compared with his turnover percentage (9.7), which is the lowest on the Indiana Elite roster.

It’s not hard to see why Galloway is a prospect on the rise, particularly for programs in the midwest.

A priority for several programs and a top 60 recruit nationally, Loveday is averaging 9.9 points, 6.1 rebounds, 1.9 blocks and an assist per game on the Gauntlet circuit.

He’s shooting 41.7 percent on 3s in 12 attempts and 70 percent on 2s. His usage, however, is just sixth on his team at 15 percent, according to Open Look Analytics.

Loveday has a strong defensive rebounding percentage (20.7) and block percentage (7.3) and is shooting 66.7 percent from the free throw line.

It’s not easy to secure productive frontcourt players on the recruiting trail and Loveday’s efficiency should continue to make him a priority in the 2020 class.

Unfortunately, his statistics haven’t been reliably reported this spring as Open Look Analytics has data from just one of his games and the official adidas Gauntlet stats only lists one game as well.