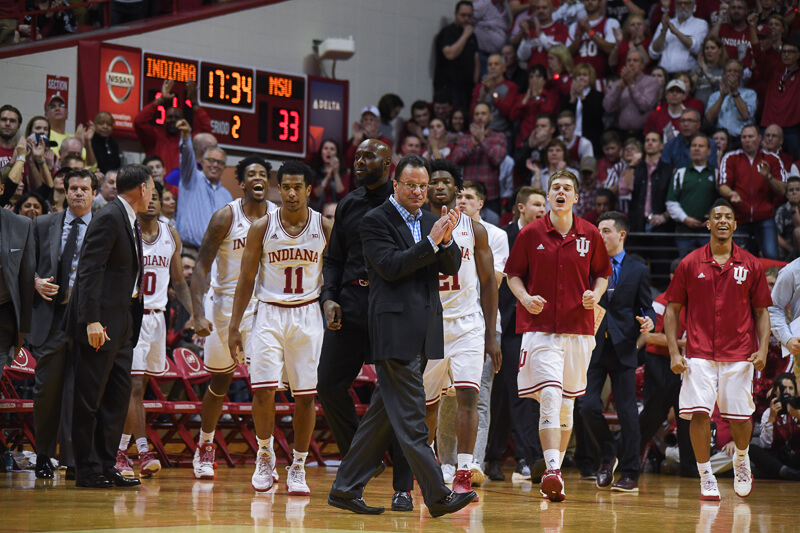 Inside IU basketball with Tom Crean was live on Monday evening from the Holiday Inn in Bloomington. This week’s player guest was Devonte Green.

After a show last week filled with technical glitches, this week’s edition was much smoother. Below are news, notes, and quotes from Tom Crean and Devonte Green (all quotes are from Crean unless noted otherwise):

· On the loss of OG Anunoby, “He was really getting better. People forget that he had a tough summer. He didn’t get to do anything all summer because of his groin (injury), and how that affected him. It’s just tough for him. There’s certainly no doubt about that, because he puts so much into it, and he just absolutely loves the game.”

· On Juwan Morgan, “He’s getting better. He did a little more today, although we didn’t do a ton of live (action) with him, but we were off yesterday. He’s definitely getting better, so we’ll keep seeing how that goes.”

· On James Blackmon Jr. stepping up of late, “It’s key that he continues to guard better, guard with that awareness. He’s getting more athletic because he’s healing… we have a lot of guys that have missed a lot of time. Now, their bodies have to catch up with that, and the athleticism has to catch up. That’s what’s happening for him… There are things he’s doing now with the ball that he wouldn’t have been able to separate or do back in November and December. He’s getting better, but he’s getting healthier, he’s getting more athletic… He moved well without the ball the other day, did a great job of setting his cuts up off the screen. He’s covering more ground on both ends of the court.”

· On how missing Anunoby and Morgan hurts defensively, “The thing about having a guy like OG and Juwan is you can switch every position with those guys. It’s not like they’re perfect, but they’re really really good at 6-foot-8. We haven’t had that as of late here, especially the last three halves (beginning at Penn State). It affects your defense. That being said, guys like James, Rob, have to be that much better and more aware. We still want to be able to switch, to be able to take teams out of things they want to do.”

· On the quick turnaround after the Penn State game, “We didn’t do a lot on Thursday, other than a lot of walk-through and film… Friday’s practice ended up being really short because they were really, really feisty and rolling. I was proud of them. So we ended up doing a lot of walking through and shooting free throws, things of that nature. They picked it up, they talked. It’s really, really easy to get distracted, not because we’ve got a game coming up, but because we’re finding out about OG and whether it’s going to be definitive. It’s hard for them. They feel for him. We’ve got some guys that have definitely struggled personally for him and how they feel for him… For them to focus the way that they did, it’s one thing to play hard and play intense, but they really locked in.”

· On Robert Johnson’s improved leadership, “(It’s) crucial that continues. If we’re going to continue being a better basketball team, that has to happen. The next step is for James to be that way, and for Josh (Newkirk). Not just at home, when things are going smoothly, but even when it isn’t… that’s going to be key for our juniors, because they had a real safety blanket back there in OG, who could make up for a lot of mistakes and things on the glass.”

· On the strengths of Michigan, “Everybody they put on the court can shoot the three with range. They run a very systematic offense – they are going to read their cuts, everybody can shoot and they play through the high post, they can play through their big men… they are a bona fide real deal, there’s no question about that. They’ve got a deep team, they’ve got the shooting at every position, and they’ve got a very smart and cerebral team in how they want to defend.”

· On having to adjust to officiating, “Every game has been different with what we were able to get out of the post, what we were able to get out of cuts – things of that nature. We’ve just got to continue to evolve in the sense of doing everything that we can control, which is: how we post, how we cut, how we drive it, how we screen, how we show our hands. And then as the games go on, the adjustments that go into it.”

· On McRoberts, “When most of the young men were gone in May, he was always around, working out, or just around. And then we got into the workouts you could see it – that he was really going to fit – he was going to work hard, and that he did fit. It’s just become a matter of him improving, of him getting stronger, of him understanding the speed of this game, the speed of the people that he’s playing against, building that confidence level – I was so happy for him when that three went in the other day. He works extremely hard at those things, and it’s crucial that he continues to see himself that way. That’s why, at times, I think there have been some shots taken, in a sense of  ‘why was he on the floor for this, why was he on the floor for that?’ Well, we believe in him. That’s one reason. And you never know when those days are going to come where you’re going to need him even more, and that’s exactly where we’re at right now. So I’m proud of what he’s done and is doing, and I think he’ll get a lot better.”

· When asked by Fischer on if he’d rather watch a recruit take part in an organized team practice or an open gym, “Depends on who’s coaching them, to be completely honest with you. Is the practice going to be structured, is it going to be energetic, is there going to be teaching in it? The open gym, you’re not going to learn a lot for the most part. You will learn who really wants to bring it – who winning means something to, and who will play hard… The worst thing to do is go to a practice with no energy. I’d rather just sit in the car and read a book. Honestly. I’ve been to a few of those, and they don’t do any good for you.”

· When asked what he thinks of fans that yell at the TV during games, he said he was ok with it, adding, “It’s therapeutic.”

· On Curtis Jones’ relationship with Michigan football assistant coach (and former Colts offensive coordinator) Pep Hamilton, “(Hamilton) is his godfather. Pep and Curtis Sr. are best of friends… they have a great relationship. I’m not sure if Pep will be in Ann Arbor when we’re there. I don’t think Jim (Harbaugh) will be, because of the recruiting period.”

· Devonte Green, on his time so far at IU, “It’s all I thought it would be and more. I’m having fun and enjoying the ride. I’m getting more comfortable playing within the offense, learning the plays and playing my game within the plays.”

· Green, on how preparation for Big Ten games is different from non-conference, “A lot more preparation comes with it. More film, more walk-through things, learning principles and sticking to those.”