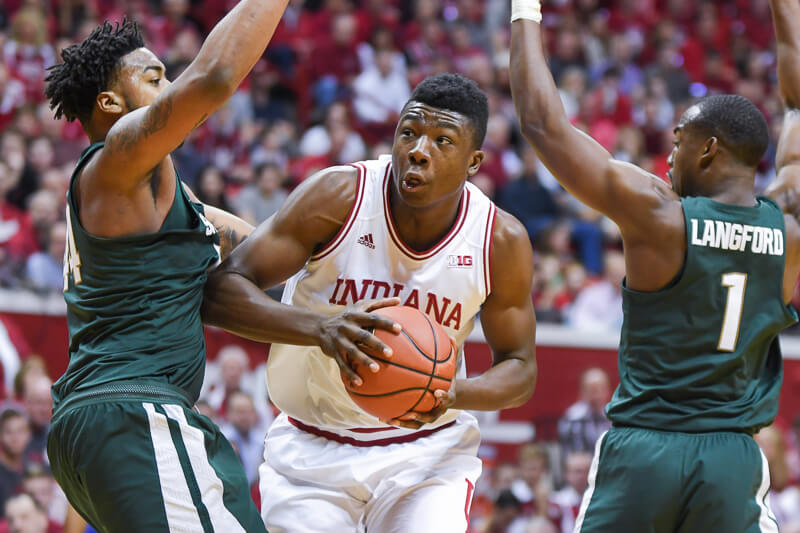 After finishing last season as Big Ten regular season champions, Indiana entered the 2016-2017 campaign with major expectations. But the Hoosiers have battled injuries and several close losses along the way. Despite those setbacks, Indiana has now won three in a row and is above .500 in conference play for the first time this season.

This year’s debut of “Tourney Watch,” which will be a weekly feature up until Selection Sunday on March 12, takes a look at IU’s current nitty gritty profile, bracket projections and more.

The consensus right now is that Indiana would be in the field if it were selected today. The model on Crashing the Dance currently has the Hoosiers with the seventh best profile among Big Ten teams behind Wisconsin, Maryland, Purdue, Minnesota, Northwestern and Michigan State.

The Big Ten currently looks like a seven (or eight) bid league with Wisconsin, Maryland, Purdue, Minnesota, Northwestern, Michigan State and Indiana all in on most projections.

The three other teams from the conference on the fringe, according to Crashing the Dance, are Michigan, Illinois and Nebraska.

As the season moves along, we’ll dig more into each team’s projections, but Bracket Matrix (updated Jan. 23) currently has Wisconsin as a No. 5 seed, Maryland and Purdue as No. 6 seeds, Minnesota and Northwestern as No. 7 seeds and Michigan State as a No. 9 seed.