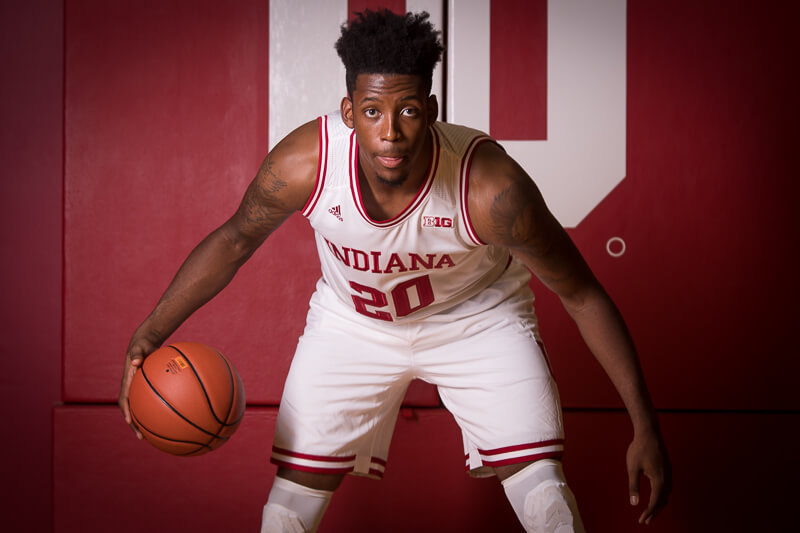 With the start of college basketball season on the horizon, we’re taking a long look at the conference at large as well as Indiana’s roster this month. Today, we continue our look at Indiana’s roster with De’Ron Davis.

Indiana ran a marathon in its recruitment of four-star forward De’Ron Davis and won the race.

The Hoosiers began tracking Davis as a freshman at Overland High School when he was ranked as one of the nation’s top five players. And even when Davis slipped in the national rankings, the IU staff was still there as other schools tapered off.

“He was able to build a relationship with them through adversity,” Danny Fisher, Overland’s coach, told Inside the Hall this summer. “When you have an opportunity to do that, it’s real.”

Indiana’s persistence with Davis paid off last November when the Hoosiers won his commitment after it appeared Mississippi State may swoop in and nab him at the last minute. Davis cited his long standing relationship with the Indiana coaching staff as the primary reason behind his decision.

“They knew what kind of player I was, they knew what I could bring to the program,” Davis explained. “Family always sticks together and I’m a big family guy. That really stood out to me.”

As a senior at Overland, Davis led Overland to a second straight Class 5A state title. He finished his prep career with 442 blocked shots.

He didn’t arrive in Bloomington until late August as he worked to finish up academic requirements in Colorado, but Davis should immediately find himself in IU’s rotation.

At 6-foot-10, Davis could back up Thomas Bryant or play alongside him at times, depending on the opponent.

“He’s been great. Always willing to learn, asks questions and listens,” Bryant said last week at Big Ten media day. “He listens when we tell him he needs to do something. He tries, he works very hard.”

Assuming he’s 100 percent healthy – a wrist injury in the spring and an Achilles injury this fall are two setbacks he’s had to deal with – Davis is a player that should continue to improve as the season moves along.

Despite the injury to Collin Hartman, the Hoosiers have some depth up front with Bryant, Juwan Morgan and OG Anunoby, which should allow Davis to come along at a comfortable pace.

Bottom Line: Davis was an important recruit for Indiana for several reasons. Indiana put a ton of time into him going all the way back to his freshman year of high school, when then-assistant coach Steve McClain began laying the ground work. While he wasn’t ultimately a five-star recruit, he has a chance to be a difference maker. He’s got excellent footwork and fundamentals for a player his size, but will need to improve his explosiveness and athleticism. Indiana’s defense should benefit from having Davis around the rim as he’s an above average shot blocker and rebounder.

Quotable: “I think at the end of his freshman year, midway through his freshman year, we’re going to see a completely different player. He’s truly going to see what he’s capable of. It’s going to make everybody go back and look at those rankings and say ‘how did we miss on this kid?’ Because De’Ron is a kid who gets better through adversity and when he’s challenged.” – Fisher on Davis and how he expects him to develop this season.