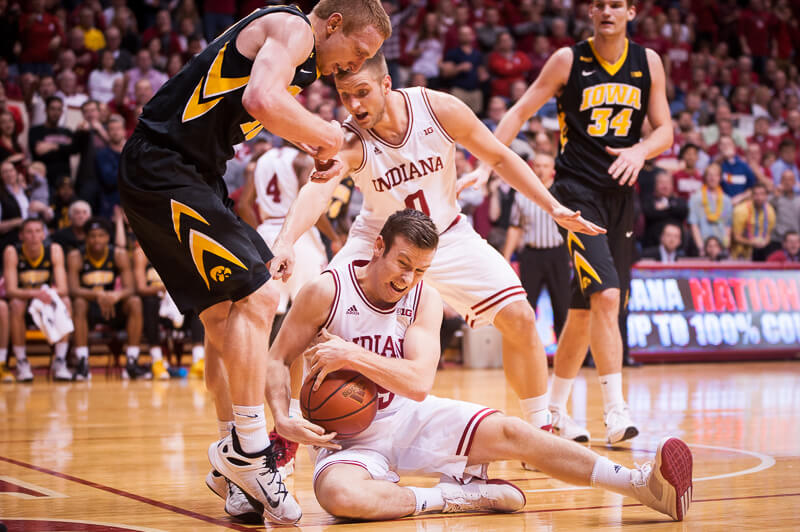 Welcome to “That’s A Wrap,” our player-by-player recap of the 2015-2016 Indiana Hoosiers. Today: Harrison Niego.

But when Indiana lost James Blackmon Jr. for the season and Robert Johnson for five games late in the season, Niego acted as a capable fill-in for a team that was short on backcourt depth.

Niego, a 6-foot-2 guard from Lyons Township High School in La Grange, Illinois, turned down Division I offers to come to Bloomington as a walk-on.

And when his number was called, Niego showed he belonged.

In Indiana’s crucial 85-78 win over Iowa at Assembly Hall, Niego logged seven minutes and hit a key baseline jumper in the second half to go along with a steal. He also took a charge and acted as a pest defensively on Hawkeye guard Mike Gesell.

“Harrison just needed to have that confidence,” Tom Crean said following the game. “Sometimes he’s his own worst enemy because he overthinks it, and we just wanted him to play fast. I wouldn’t say reckless, but try to play fast and be really, really cognizant of moving the ball to people and be confident that he’s out there and not worry about who he’s matched up with, just do his best job. And I thought he did a fantastic job.”

Niego also logged seven minutes in IU’s Big Ten clinching win at Iowa, had two assists in a win over Purdue and had two assists and two steals in a late season win at Illinois.

“I just stay ready,” Niego told Inside the Hall before IU’s Sweet Sixteen matchup against North Carolina. “Coach Crean pushes me every day in practice so that when I get into the game, there’s no pressure at all and I’m very prepared.”

Moving forward, Niego should continue to become more comfortable at the Big Ten level and should be a player that the coaching staff can rely on to provide solid depth in the backcourt.

Bottom Line: When Niego speaks, it’s apparent that he’s living out a dream playing at Indiana. As he showed as a freshman, he can help impact winning when his number is called. He’s a solid defensive player who can come in off the bench and provide a boost with ball pressure and should develop more confidence in taking open shots as he moves into his second season. After drawing some comparisons to Errek Suhr during his first season, his role and development will be interesting to watch in the coming seasons.

Quotable: “He did a really good job. I told Harrison the other day, he’s done an excellent job for us. He’s turning down scholarship offers to come to Indiana. And I told him and I told Ryan Burton the same thing, those two aren’t doing anything wrong not to play. Sometimes there’s a reason guys aren’t playing. Sometimes they’re just not good enough. Those two are.” – Crean on Niego following a win over Iowa on Feb. 11