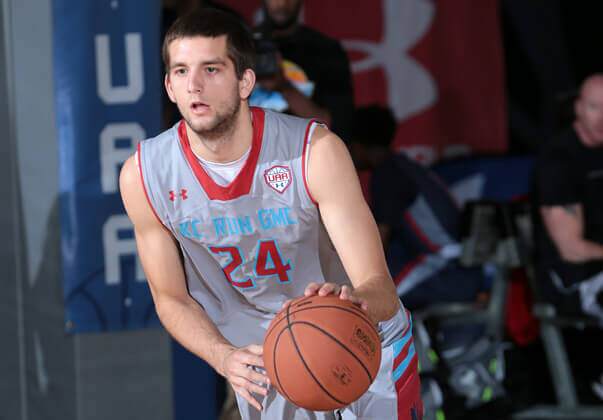 One of the top shooting guards nationally in the class of 2017 got his first up close look at Indiana basketball over the weekend.

Eudora, Kansas guard Mitchell Ballock, rated the No. 49 prospect in his class by the 247Composite, was in Bloomington from Friday until Sunday for an unofficial visit.

The 6-foot-4 guard said he was impressed by the energy, speed and intensity he observed watching the Hoosiers practice.

“They’re really into the little things (during practice),” Ballock told Inside the Hall on Sunday. “Because once you perfect the little things, coach (Tom) Crean lets you play when you get to the game. I like how he gives you the freedom to react and play the game.”

Recent surgery to repair a torn labrum in his right shoulder will sideline Ballock for his junior season, but he plans to be 100 percent by next April.

Still, he used the visit as an opportunity to talk with Crean and the coaching staff about ways to improve his game.

Ballock said he primarily talks to new assistant coach Rob Judson, but has also developed a strong relationship with Crean.

“I talk with Coach Judson the most. He’s a good dude,” he said. “He was involved in practice a lot. He’s active. He’s still got it. Coach Crean is a good dude, too, and I talk to him a lot. Obviously with the head coaching experience there, they have different mindsets and can point out different things. It’s good to build a relationship with those guys.”

Over the summer at the Under Armour All-American Camp, he listed Indiana as a school that he wanted to visit.  He decided this weekend, one in which Indiana started practice and the football team was set to host the No. 1 team in the country, was perfect to make the seven hour drive east to Bloomington.

“I just wanted to go check it out and see how it was different from some of the programs I’ve already seen,” Ballock said. “They wanted to get me on campus and let me see how they do things. It was good.”

In addition to the strong interest from Indiana, Ballock listed Kansas, Oklahoma, Oklahoma State, Creighton, Northwestern and Marquette as just some of the schools involved in his recruitment.

He could begin taking official visits in early 2016. For now, the focus for Ballock shifts to rehabbing his shoulder.