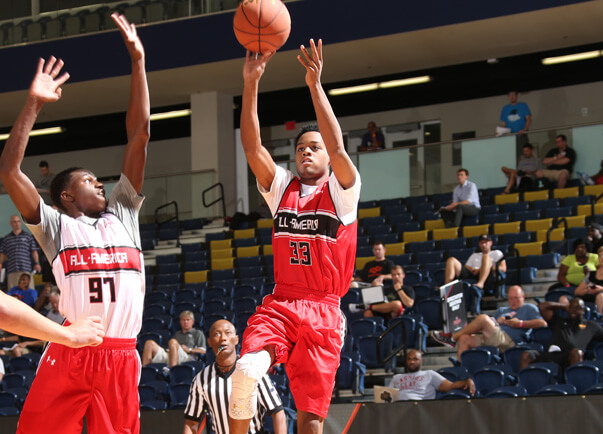 Class of 2016 four-star guard Curtis Jones, the No. 83 player in the country according to the 247Composite, committed to Indiana on Saturday.

I am glad to announce that I have verbally committed to play basketball at Indiana University #IUB ?????????

Jones cited several factors for choosing the Hoosiers in a text message to Inside the Hall.

“The relationship I had with the coaching staff and players,” Jones said. “They do a great job at developing players, it’s a good fit for my game and they have a family environment.”

As a junior at Huntington Prep (W.V.), Jones averaged 15.3 points and 3.9 assists per game while teaming with current IU freshman Thomas Bryant and IU target Miles Bridges. Indiana is one of three finalists for Bridges, who is also considering Kentucky and Michigan State.

He chose the Hoosiers over Georgetown, California and Oklahoma State and also had offers from Cincinnati, Maryland, N.C. State, Virginia and West Virginia, among others.

Jones is the third player from the Boo Williams AAU program to commit to Indiana in recent years, joining Troy Williams and Robert Johnson.

In his final season on the Nike Elite Youth Basketball League (EYBL) circuit, Jones averaged 16.1 points, 3.2 rebounds and 1.5 assists per game. He shot 35.4 percent on 3s.

Following the family’s official visit to Bloomington last month, Curtis Jones Sr. told Inside the Hall that he walked away with a “great feel” for Indiana basketball.

“In talking with my wife, my family and my son, we really felt good about the visit and what Indiana has to offer,” Jones Sr. said. “But not only that, the fans. You could feel the pride when we went across campus. Everybody takes being a Hoosier personal and there’s a sense of pride. You can feel that as well.

“We really enjoyed the visit. From the academic side, obviously from the basketball side, just getting to know Indiana basketball, Indiana the university, we walked away from it knowing that Indiana is a great place.”