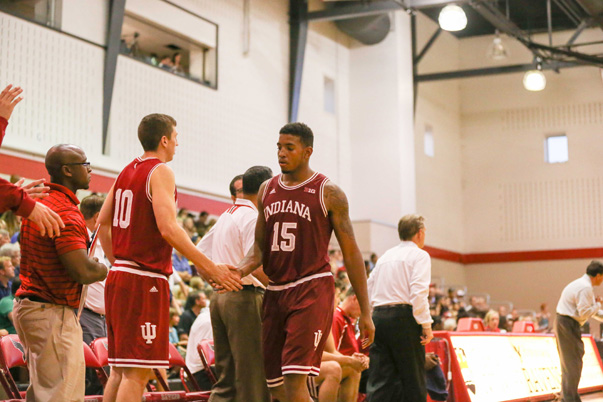 With the departure of Noah Vonleh to the NBA, Indiana lost arguably the best defensive rebounder in the Big Ten. At times, Vonleh could control the defensive boards on his own, but without him, much is going to be asked of both IU’s guards and frontcourt players this season when it comes to hitting the glass.

One of the guys who IU hopes can step up to fill some of the void is Devin Davis, who is expected to have a significant role in IU’s frontcourt as he enters his sophomore season. IU’s trip to Montreal gave us a first glimpse at the offseason progress made by the Indianapolis native.

“Coach Crean talks to me about being consistent and going to the glass every time,” Davis explained after IU’s win over UQAM to close out the trip. “So I try to go every time and if the ball bounces my way, I do my best to come up with it.”

While Davis is unlikely to emerge as a featured scorer on an IU team with significant firepower in its backcourt, the Hoosiers do need him to finish the opportunities he is given, which happened often in Canada as he hit 14 of his 18 field goal attempts.

More than anything else, though, Tom Crean believes that consistency from Davis is something he hopes to find before the start of the season. In IU’s first game in Canada, Davis pulled down a team-high 16 rebounds, but grabbed just three in a loss to Ottawa two days later.

“I think he has worked hard at it (improvement), but there is a lot of room for him to work even harder and develop,” Crean said following IU’s win over McGill. “I thought tonight was his best game, offensively, although last night was his best game `intent-wise’. What he wants to erase is having 16 rebounds in 19 minutes the first night and then three rebounds in 22 minutes the next night. Those are the inconsistencies that he wants to erase.”

Like most of Indiana’s players who have come through the program since the arrival of Je’Ney Jackson, there’s a noticeable difference in Davis’ body since his arrival in Bloomington.

“I think that helps me a lot to be able to guard the post,” Davis said. “Coach Je’Ney Jackson has done a good job of keeping me conditioned so I can still switch onto some guards and versatile to guard both of them.”