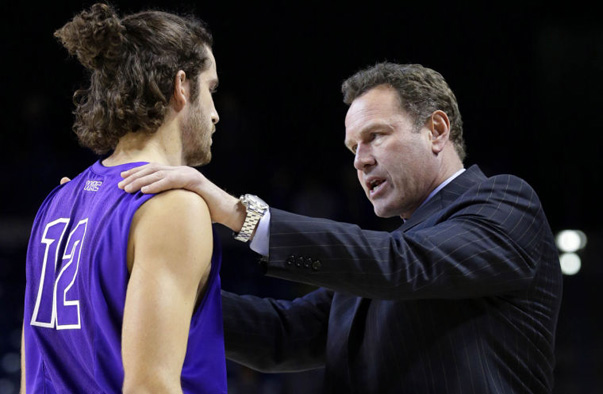 The complete 2014-2015 Indiana basketball schedule won’t be announced until the fall, but IU’s Big Ten opponents have already been confirmed as well as several non-conference contests.

The latest non-conference game to be confirmed is Grand Canyon University, which is coached by former Phoenix Suns guard Dan Majerle.

According to AZCentral.com, Tom Crean was a student at Central Michigan when Majerle played there in the 1980s, which helped facilitate the game.

Grand Canyon, which is in the Western Athletic Conference (WAC), added 2,000 seats to its arena this offseason.

We’ve already highlighted the additions of Christian Watford (Detroit, Golden State) and Will Sheehey (New York) to the NBA summer league, but each of IU’s lottery picks over the last two years will also participate.

Cody Zeller and Noah Vonleh will be teammates for the first time with the Charlotte Hornets in the Las Vegas summer league, which begins on July 11 and runs through July 21.

NBA TV will televise all 67 games, with 38 games airing live, including the Hornets’ July 13 and 14 games. Charlotte’s summer league team will be coached by Patrick Ewing.

Victor Oladipo will also participate in the Orlando pro summer league for the second consecutive year, where he’ll team with Orlando’s first round picks, Aaron Gordon and Elfrid Payton.

Several Magic summer league games will also be televised live on NBA TV. A complete schedule can be accessed here.

· Steve Clifford talks Vonleh: Hornets coach Steve Clifford says he’s excited to add the Big Ten freshman of the year to a roster that is coming off of a playoff appearance and noted that the system Vonleh is coming from should help him as he transitions to the NBA.

”The fact that Noah played for Tom Crean (at Indiana) was a positive,” Clifford said, according to The Eagle-Tribune. “That’s a really structured, good program. They run a lot of stuff he’ll see in the NBA. We were very, very happy to have a chance at someone like Noah.”

· Spalding adds SEC offer: Louisville Trinity forward Raymond Spalding, who is the subject of a recruiting battle that features Indiana, Louisville, Xavier and others, was offered a scholarship by Tennessee recently according to this report. Spalding is rated the No. 83 prospect nationally in the class of 2015 by the 247Composite.

· Giddens to announce decision: Class of 2015 Marietta (Ga.) center Daniel Giddens will announce his college decision on Friday, which is also his birthday, and Ohio State is believed to be the heavy favorite.

Giddens, the No. 46 prospect nationally according to the 247Composite, is also considering Arizona, Florida, Georgia, Indiana, Kansas, Texas A & M and Wake Forest.