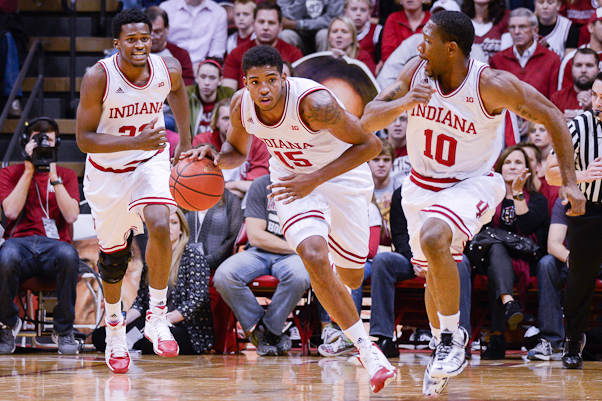 The 2013-2014 season began with plenty of promise for freshman Devin Davis. In fact, his collegiate debut ended with a near double-double as he finished with 10 points, nine rebounds and three blocks in just 14 minutes against Chicago State.

Davis appeared to be a player IU would be able to count on for energy minutes in the frontcourt with the potential to play a variety of positions thanks to offseason work on his ball handling.

But as the season moved along, Davis never cracked the rotation with consistency. He played double figure minutes in just five of Indiana’s 18 conference games. The Chicago State game was the only time he would reach double figures in scoring. When the final numbers were tallied, his 8.8 minutes per game ranked 10th on the team.

Still, there’s optimism to draw out of Davis’ first season in Bloomington and reasons to believe that he can and will be a valuable contributor moving forward.

When he did earn playing time, he performed relatively well. In the five conference games in which he played double figure minutes (an average of 14.4 minutes played), he put up 4.2 points and 3.4 rebounds. Those aren’t spectacular numbers, but they are certainly solid enough to believe that he could expand on that production moving forward.

In IU’s final road game, a narrow 84-80 loss at Michigan on Mar. 8, Davis played a season-high 25 minutes and held his own with nine points and six rebounds.

Where he’ll have to get much better, however, is on the defensive end and in taking care of the ball. His fouls per 40 minutes average was the worst on the team at 7.4 as was his turnover rate of 25.8 percent. He also failed to register an assist all season, which is something that will need to change moving forward with the shooters Indiana is adding on the perimeter next season.

Despite being undersized to play the five, where he started and logged minutes against Michigan, Davis finished 56.4 percent of his shots at the rim. He was also an above average rebounder from a percentage standpoint (11.4 OR%, 21.5 DR%), although his low usage makes it difficult to assume these numbers would continue with more minutes.

Bottom line: As one of IU’s returning seven scholarship players, it’s an important offseason for Davis. Frontcourt depth may be an issue for the Hoosiers next season depending on how the rest of the roster is filled this spring and he’ll need to carve out a niche as a guy who can defend close to the basket, clean up the defensive glass and finish plays when given opportunities. The fouling and turnovers must be addressed in the offseason as well, but the talent is there for Davis to become a valuable rotation regular.