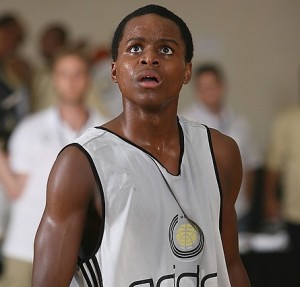 Ferrell, the No. 17 player in the 2012 class according to Rivals.com, announced his decision to attend Indiana over Butler, Florida, Virginia and Wake Forest prior to Park Tudor’s season-opener against University.

“Right now in front of my family the Park Tudor family who have all been my biggest supporters, I want to verbally commit to play my college basketball for coach Tom Crean at Indiana,” Ferrell said to a capacity crowd.

He’s the third five-star recruit to commit to Crean since October 31, joining the aforementioned Perea and 2011 Washington big man Cody Zeller, who committed and signed a Letter of Intent on November 11.

Inside the Hall will have more coverage of this developing story in the coming hours.