Knight to be inducted into IU Hall of Fame, but will he attend the ceremony? 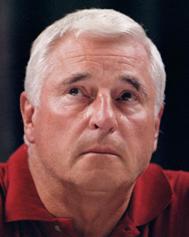 Indianapolis Star columnist Bob Kravitz spoke with Fred Glass and revealed that the AD is already making a concentrated effort to bring back Knight on November 6:

Already, Glass has sent Knight a hand-written letter asking him to come to the ceremonies.

He also has commissioned one Hall of Fame committee member — former Bloomington journalist Bob Hammel– to personally reach out to The General and convince him it’s time to come home.

Time heals wounds. But something tells me that the letter from Glass could be lost on Knight’s desk. It’s encouraging that Hammel, a long-time friend of Knight and former Herald-Times sports editor, has agreed to assist in this process. But Hammel’s involvement doesn’t guarantee Knight will return.

Kudos to Glass for realizing that it’s a sham to have a Hall of Fame at IU for athletics that doesn’t include Knight. Regardless of the way things ended nine years ago, it’s time to do the right thing and recognize Knight’s accomplishments and contributions to Indiana.

The only question that’s left to be answered: Will Knight accept Indiana’s invitation?