Crawford dunk is the talk of the Interwebs 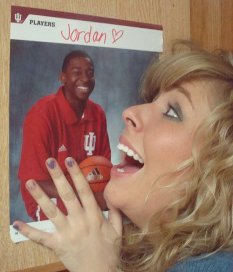 (You can listen to Crawford talk about the dunk here.)

The last time most Indiana University fans thought about Jordan Crawford was probably June 11, 2008. That was the day when Crawford announced he would not return to Bloomington for his sophomore season. Some of you probably cried when you realized that Kyle Taber was the last man standing.

Crawford decided a month later that he would transfer to Xavier and with Sean Miller’s departure for Arizona, he’ll suit up next year for first year coach Chris Mack.

When I think back about Crawford’s season at IU, two things immediately come to mind: 1) He was an incredibly talented and gifted player with a boatload of potential; and 2) He was often erratic and downright frustrating to watch. Some of you even referred to him as “TUO” or “The Undisciplined One.”

Based on point No. 1, it really didn’t surprise me that Crawford reportedly posterized LeBron James the other day in Akron. What did surprise me is the amount of coverage this dunk, which we will probably never see, is garnering across the Web. Here’s a healthy sampling:

+ Chris Chase writes that by censoring the video, LeBron just made Crawford’s dunk into a legend. {The Dagger @ Yahoo!}

+ LeBron gets dunked on; none of us are witnesses. {Deadspin}

+ Nike doesn’t want you to know about Jordan Crawford, but Marquis Teague describes the dunk. {The Hoosier Scoop}