Mike and Mike campaign for Dan Dakich, I shudder 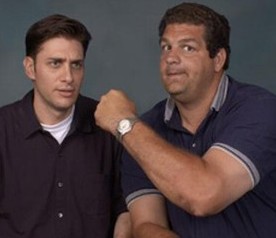 On the drive in to the 9-to-5 this AM, I caught the tail end of Dan Dakich’s appearance on Mike and Mike in the Morning on ESPN Radio and the segment that followed the interview. Dakich did a bit of campaigning to keep the position permanently after the season ends and then Mike and Mike showed the man some love.

First, here are Dakich’s comments, courtesy of MDS over at the FanHouse (who, by the way, apparently didn’t know that Dakich excused his players for missing practice about a month ago):

It’s nice to hear Dakich wants the job, but the fact that he’s 3-3 and that IU has announced a search committee to find its next coach should give you an idea of his chances to land it. I’m actually a Dakich fan in the sense that he’s a passionate guy that knows the game and I do believe that he will be back at IU in either an assistant role or as Director of Basketball Operations.

Now, onto Mike and Mike. I’m paraphrasing this, but essentially both men said that if Indiana beats North Carolina, they have to give Dakich the job. Really? In the unlikely event that Indiana does advance past the first weekend, is this really a reason to give Dakich the job permanently? I’m going to go with no. The last time we hired a coach for taking us on a magical tournament run, well, you know how it ended (It should be noted that Mike Davis was actually in his second year when he went to the National Championship game. He was given a contract extension after the 2001-2002 season). Nice try, gentlemen. Now, bring me Sean Miller, please.