The Morning After: Michigan 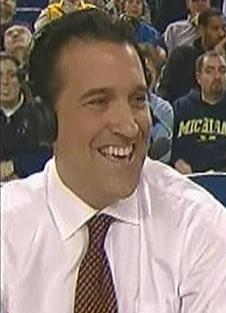 Perhaps I’m just used to last year’s struggles on the road, but I have to admit I didn’t expect anything approaching the blowout last night in Crisler Arena. But when you combine an absolutely dreadful — I mean, just totally horrendous — Michigan team with an IU squad firing on all cylinders offensively, you get what you got last night: a Big Ten road blowout. Weird.

The random assortment of observations that is this column starts … now:

— There were times I watched last night, and I felt like I was watching Memphis or North Carolina. In that, I mean that it was so clear one team was more talented than the other, that it became obvious that the more talented team didn’t need to do much strategically besides run down the floor and let their talent take over. The Michigan 1-3-1 zone was entirely ineffective against the half court, and the man-to-man was even worse. It was obvious: No matter what the Wolverines did, no matter what their players tried individually or as a group, they weren’t going to keep IU from scoring when it wanted to. As an IU fan, that was a tremendous feeling, and a totally alien one.

It also speaks, I think, to what we’ve been complaining about a little in the early stages of this season. Many of us have begged for more offensive structure. Many of us want to see Gordon running off screens all night. Whatever it is we want, Kelvin Sampson is clearly trying to strike a delicate balance between letting his talent do its walking, and letting his strategy rein it in. So far, it seems to be working.

— Poor John Beilein. Every missed three, every shanked layup, looks like it’s already taking years off the man’s life. At the very least, it’s robbing him of his few remaining hairs. It’s not his fault: This talent isn’t his, and with the exception of Manny Harris, Beilein has very little to work with in his first year. Surely he knew what he was getting into, so sympathy is probably wasted on him. Still, you can’t help but think he longs for the heady days of Kevin Pittsnogle and Mike Gansey, when the three pointers flowed like wine and the women flocked instinctively like the salmon of Capistrano.

— D.J. White was a monster last night, and is totally deserving of praise. That said, I’ll temper it a little bit, because within a few minutes it became clear as day that Michigan simply doesn’t have what any reasonable basketball fan would call a “post player” on their team. Sure, they have semi-tall guys. But those are merely that. Tall. They can’t score, defend, or rebound — or at least they didn’t last night — so D.J.’s big time performance is a little bit less impressive than it normally would have been.

All that said: D.J. was still a monster in almost every way. Bodes well for the immediate future, that does.

— I feel obligated to defend Jordan Crawford. Crawford caught a lot of hate in last night’s game thread from you Hoosier faithful, and it’s not hard to figure out why. Crawford didn’t shoot very well, didn’t take care of the ball, and even worse, chose to attack at all the wrong times. He was pressing, and he didn’t have a very good game. But it was one game. It’s important not to forget what we’ve seen from Crawford in past games, when he was a player that showed an uncanny knack for scoring the basketball in idiosyncratic ways. He remains a freshman, and will be prone to mistakes throughout the year; not only that, but his defense leaves a lot to be desired. But I think we know the alternative — Armon Bassett — is not exactly a defensive specialist himself, nor is he the most efficient court general either. So yes, Crawford had a bad game. But let’s not lose perspective about how good Crawford has been, or even more importantly, how good he can be.

— We learned a lot about Steve Lavin last night. Let’s count those things:

All that aside, I’ll admit it: I love Steve Lavin. He’s thoughtful, articulate, intelligent, self-aware, and funny and, in my limited experience, a genuinely nice dude. The world needs more Steve Lavin, if you ask me, which you didn’t.

— Finally, Brandon McGee’s final shot was pretty silly, but the best thing about it wasn’t Sampson’s reaction (“Don’t do that!”) or the Michigan crowd’s (“Assholes! Assholes!”). No, it was Jamarcus Ellis trying to hide his smile in his jersey like a grade schooler trying not to laugh in class. We caught you, Jamarcus, but don’t worry: We were laughing too.

It was impossible not to laugh last night; that win was as good as they get. Here’s to plenty more of those in the Big Ten calender … and plenty more of Steve Lavin, too.