The Morning After: Chattanooga 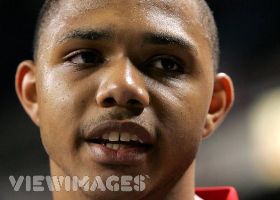 Thanks to the scurrilous Big Ten Network situation and the inability for RCN cable in Chicago to set up my cable within two hours of my calling to install service — the nerve!* — I was pushed out into the Second City’s soggy streets last night, landing at the Kirkwood with a few friends, more than a few beers, and some $2 burgers. Delicious.

Thanks to the crowded bar, though, I wasn’t able to take my usual semi-diligent in-game notes. Instead, the following is randomly culled from notes written to myself on my phone, text messages to friends, and memory:

*First, a brief note on RCN: They’re coming to my apartment at 5 today to install service. That’s a really fast turnaround from my mid-afternoon call yesterday, and a very friendly customer service woman gave us an unbeatable deal on cable, HBO, and an HD-DVR component. For what it’s worth, consider this my tenuous approval of RCN, to be revised as necessary. And now back to your regularly scheduled basketball talk.

— Eric Gordon is an incredible offensive player. (No kidding, right?) This is probably the easiest, least surprising thing about last night’s game; what was surprising was just how quickly Gordon seemed to integrate himself into the flow of the game. Rarely was a shot forced, and when shots were forced, natural talent took over. Everything he does is tinged with talent: No one has talked about his passing ability, but the downcourt pass he flicked, ever so easily, into Jordan Crawford’s hands in the first half was the most sublime measure yet of how much better he is than everyone else on the floor. And there was that dunk; that wasn’t so bad either, was it?

That said … Gordon still has a long way to go defensively. His ball defense is stellar thanks to his athletic ability; he can recover and stretch offensive players simply thanks to his superior physical structure. The problem is when the ball is in another player’s hands. Right now, Gordon looks lost in his rotations. I’m sure that area of his game will develop with strong tutelage and time, but for now, it’s a glaring issue with his game. But yeah: He’s freaking good.

— I hate to say it, but Lance Stemler is a superfluous piece. Talking with a friend last night, he questioned why Stemler should ever see the floor, and he has a major point: Stemler really doesn’t do anything helpful at all. Last year, with a deficit of athletic players, I could understand Stemler’s playing time. Sampson clearly wanted a solid guy to stretch defenses at the four and free D.J. to work on the block. That worked fine until Stemler stopped hitting shots, at which point he became dead weight. Now, in his second season, Stemler’s shooting doesn’t seem to have recovered, and his mistakes and general lack of athleticism make him dead weight yet again. If Sampson wants a small lineup, he can play Jordan Crawford and Jamarcus Ellis with Bassett, Gordon, and White. If he wants a big lineup, he can play DeAndre Thomas. Stemler will have to get a lot better in a lot of ways if he plans to make the starting lineup as the season progresses.

— D.J.’s head injury looked like it could have been much worse than it was … but in retrospect, I’m glad D.J. landed on his head. Obviously, I hope D.J. doesn’t take any hard falls, but if he is going to fall hard (D.J., stay on your feet!), then a crack on the head is preferable to a rolled ankle or a jumbled, swollen knee. It looks like White will be fine regardless, which is a relief given how small the rest of this team is.

— One camera angle last night — a behind-the-basket view of a Gordon-Ellis-Crawford fast break — gave me chills. I’m not afraid to admit that.

— As much as that pure offensive potential excites me to my very core, every time the Hoosiers put together an impressive offensive play, they surrendered an equally sloppy bucket on the other end. Credit Chattanooga, who looked like a slightly better-than-average mid-major, but also credit a sloppy IU defense. IU was a mediocre defensive team last year even with Earl Calloway’s constant point-pressure and Rod Wilmont’s strength; I worry that a younger, less experienced, more lithe lineup is going to be a downright bad defensive team. Especially on the perimeter, where the lineup is likely to include at least three first-year players. Sampson has to get those guys playing lock-down defense if he wants to sniff a national title in what is certain to be Eric Gordon’s only year in cream and crimson.

That about does it for my phone notes, or what I can remember of them. Expect more diligence, and fewer Bud Selects, next time out. And please leave your notes in the comments.