Indiana’s 2019-2020 schedule was released last week, but a new wrinkle was revealed earlier this week. According to Ben Steele, who covers Marquette for the Journal Sentinel, the Golden Eagles will play Indiana in a closed scrimmage on Sunday, Oct. ...

In their dominant win against Marquette on Wednesday night, the Hoosiers took the Golden Eagles out of offensive rhythm with some pesky defense in the first half. That included an emphasis on Markus Howard. Often, the Hoosiers sent an extra ...

Notebook: Guards step up in IU’s win over Marquette 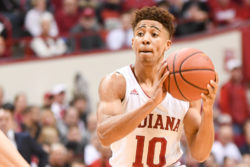 Indiana put together one of its most complete performances in several years in its 96-73 win over No. 24 Marquette on Wednesday night, and the Hoosiers have their guards to thank. IU’s young guards — Rob Phinisee, Al Durham and ...

The Minute After: Marquette 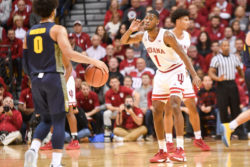 Thoughts on a 96-73 win against the Golden Eagles: While Indiana was favored, this one was still billed as a battle of equals, two emerging, promising teams sizing each other up in this young college basketball season. But it’s the ... 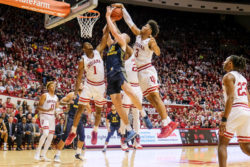 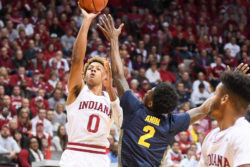 Quick thoughts on a 96-73 win over Marquette: How it happened: If this was Indiana’s first true test of the season, the Hoosiers passed with flying colors. Marquette led once in the game (2-0) and Indiana controlled this contest for ...

What to expect: Marquette

After a pair of blowout wins to open the regular season, Indiana welcomes nationally ranked Marquette to Simon Skjodt Assembly Hall on Wednesday night. The Golden Eagles are ranked No. 24 in the latest Associated Press top 25 poll. The ... 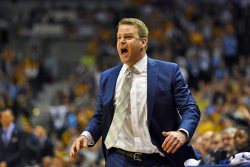 Podcast on the Brink is back for a new episode with hosts Jerod Morris of The Assembly Call and Alex Bozich of Inside the Hall. The show is available weekly. In this edition of the show, Morris is joined by Ben Steele of The Milwaukee Journal Sentinel ... 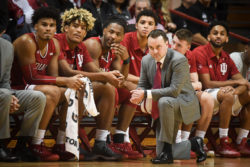 Archie Miller, Evan Fitzner and De’Ron Davis met with the media on Tuesday to preview Wednesday’s contest against Marquette in the Gavitt Tipoff Games at Simon Skjodt Assembly Hall. Watch both press conferences below:

Indiana will host Marquette in the 2018 Gavitt Tipoff Games, according to a report late Monday evening from Jon Rothstein. The Golden Eagles finished last season 21-14 and lost to Penn State in the quarterfinals of the NIT. Other matchups ...