Editor’s note: The NCAA does not allow the usage of tournament game footage. We’re running an abbreviated Film Session with screenshots as a result.

The Cowboys weren’t able to get the victory against Indiana on Tuesday night. But they did excel in taking away Indiana’s go-to offense of late: A ball screen between Xavier Johnson and Trayce Jackson-Davis.

While Wyoming didn’t completely shut it out, it was a clear point of emphasis to try and keep it in check as the Cowboys threw extra help at the ball and Jackson-Davis.

We’ll take a look at the Cowboys’ defensive strategy in the latest edition of Film Session:

Here’s Indiana’s first ball screen where Johnson got downhill in the first half. We can see Graham Ike stayed with him all the way to the block, meaning Johnson was essentially double-teamed on his drive. Jeremiah Oden has left Race Thompson and is sitting at the top of the restricted area to deter the lob. Drake Jeffries has moved off Parker Stewart in the corner down to Thompson on the block. Brendan Wenzel has moved off Miller Kopp and brings help near Jackson-Davis.

This was the Wyoming strategy: Have the big stick with Johnson and don’t worry about recovering back to Jackson-Davis immediately because we’ve got other defenders occupying his space. Give up the weak side to Indiana’s shooters instead. 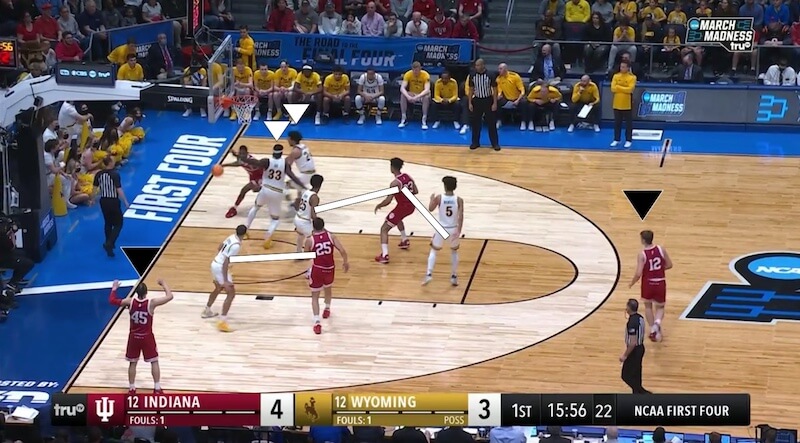 Johnson makes the pass to Stewart in the corner after he was stopped near the rim. The Cowboys are able to recover everywhere and the Hoosiers get no advantage off Wyoming’s strategy here: 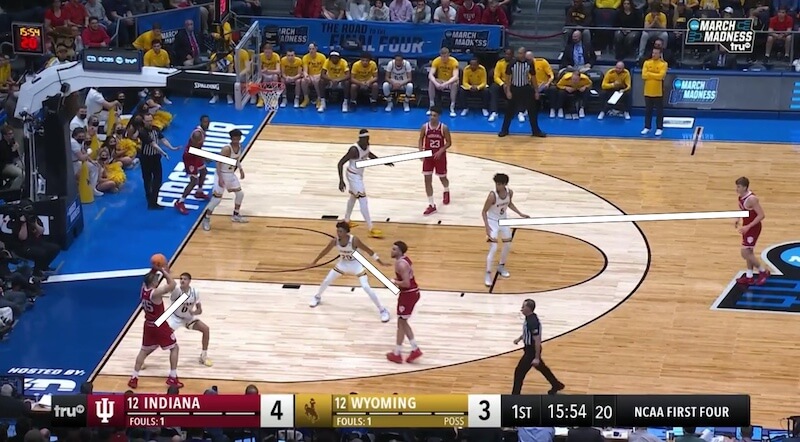 A touch later in the first half, Wyoming also found some success by digging off the perimeter and knocking the ball loose from Johnson. He was able to recover the ball, however. This possession ended in a Kopp runner that missed: 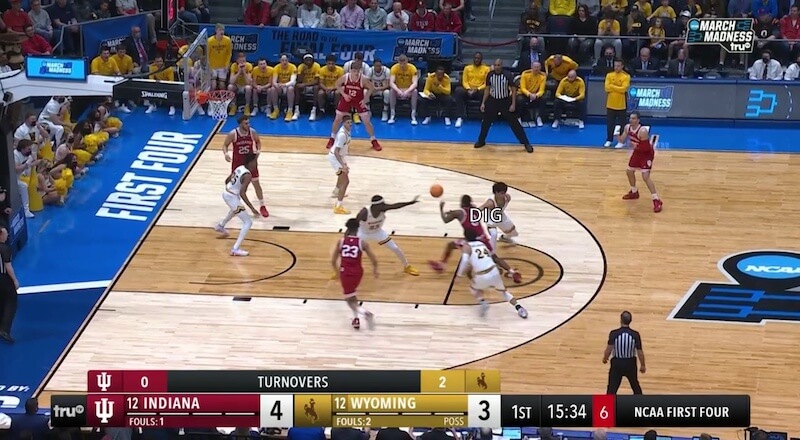 Here’s the first ball screen Johnson and TJD were able to connect on. We again see two Cowboys on the ball and Oden at the top of the restricted area. But with Indiana’s shooters on the strong side now, Jackson-Davis calls for the lob, as he has a sliver of space: 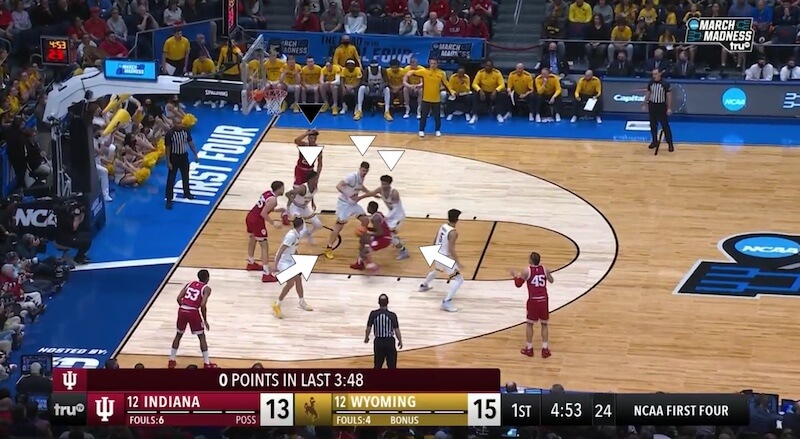 Johnson tosses it to him as Hunter Thompson recovers back. He catches it above him: 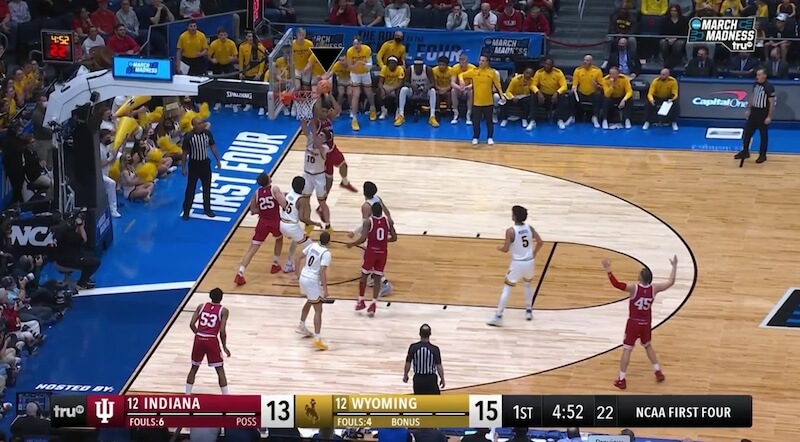 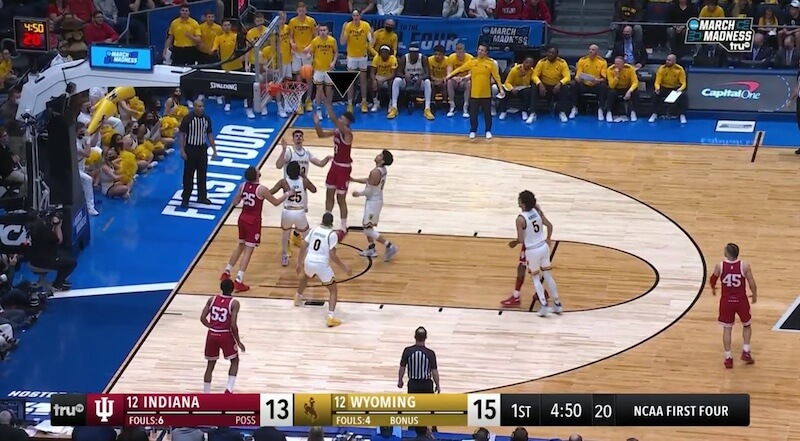 Here’s another ball screen where Wyoming put two on the ball. This time Oden is higher up tagging Jackson-Davis, which is giving Thompson room on the left slot: 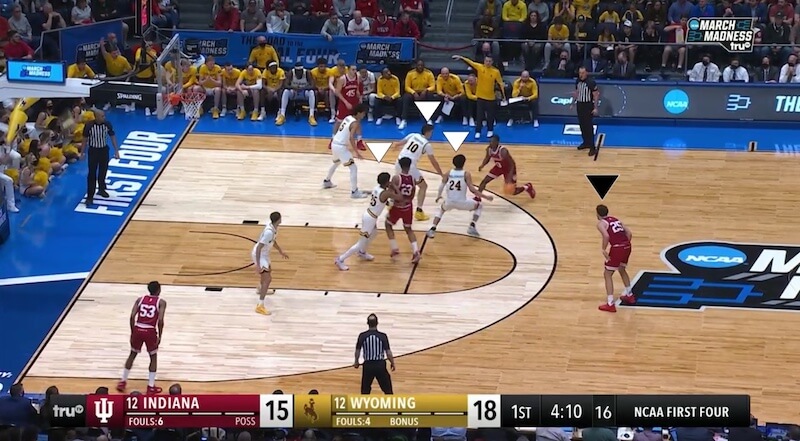 But as Johnson makes the pass, Oden is able to recover out and Thompson has to keep the ball moving: 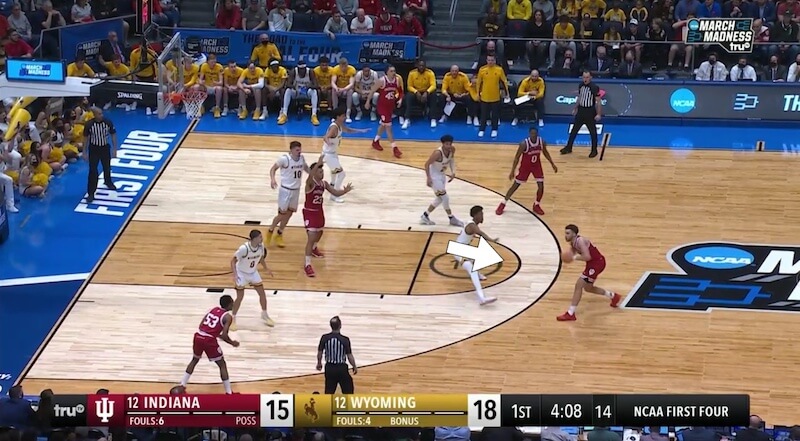 It took until the end of the game for Indiana’s ball screen offense to open up a bit more. And it was thanks to Jordan Geronimo. Here we see two on the ball again. But as Jackson-Davis rolls, Oden is leaning towards Geronimo in the dunker’s spot. Notice too that Jackson-Davis has not been tagged by Kopp’s man, Jeffries, on the roll either: 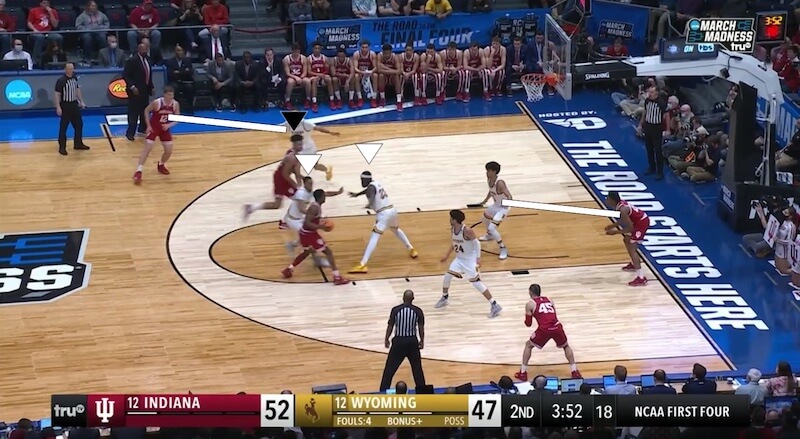 As Oden moves the opposite way anticipating the pass to Geronimo, this finally gives TJD a clear lane on the lob: 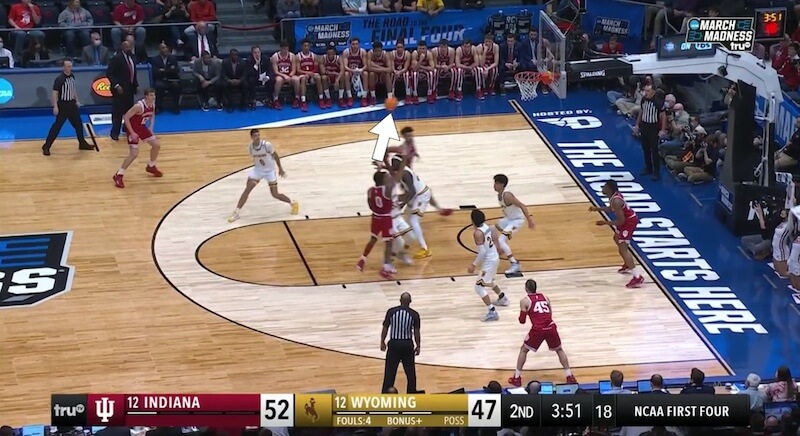 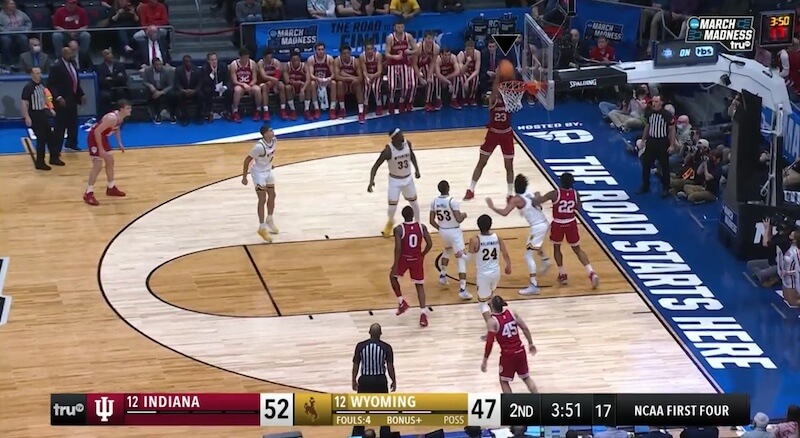 On Indiana’s next possession, Stewart’s man tags Jackson-Davis. And again we see two on the ball and Oden positioned at the top of the restricted area: 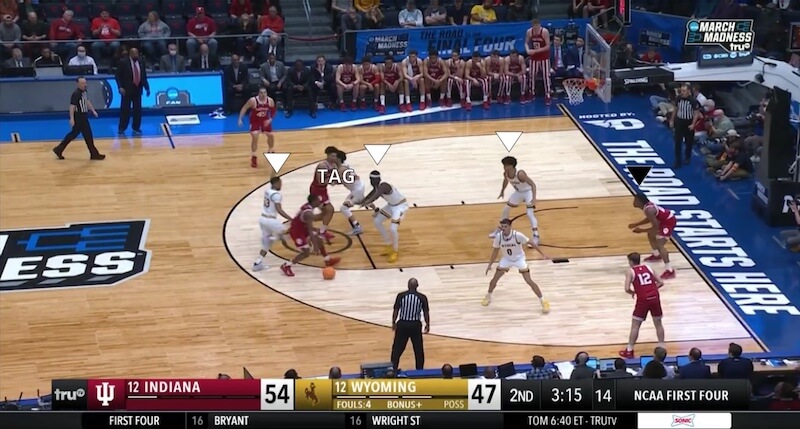 So Johnson throws the pass to Geronimo this time around: 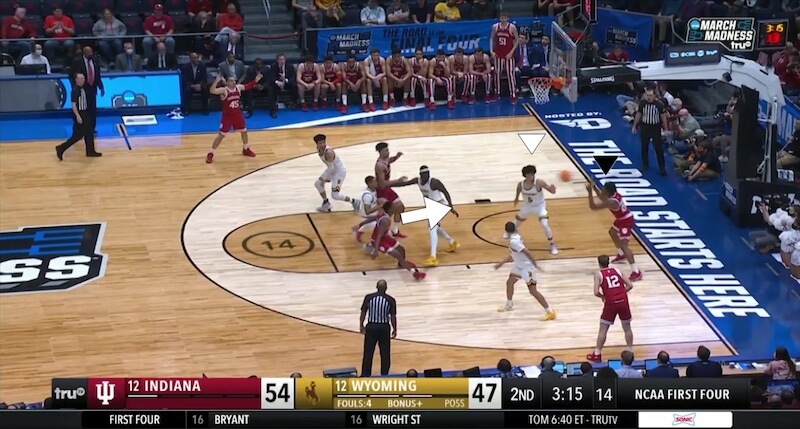 He moves to the other side of the basket and scores to put Indiana up nine with just over three minutes to play. 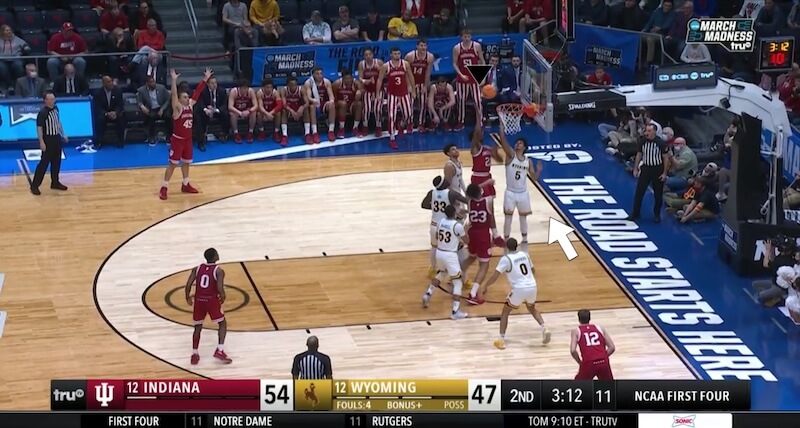 By being a threat from the dunker’s spot, Geronimo was able to keep Oden honest and it made the difference down the stretch.