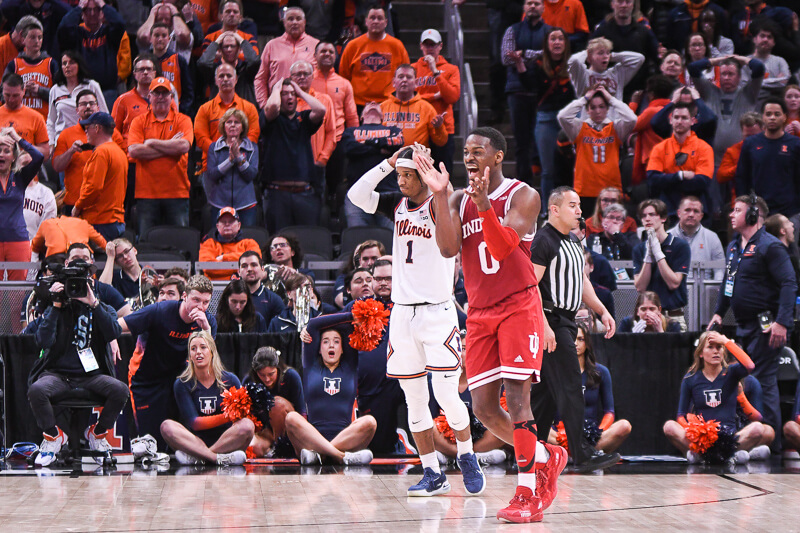 As we head into the weekend, there are still 20 more automatic bids to be handed out, with 15 of those coming throughout the day on Saturday. And while there are a handful of bubble teams who have picked up key wins in recent days, there are still a few opportunities for bid thieves leading up to Selection Sunday. Here are the conferences to watch:

• Atlantic 10 – This one has a ton of bubble intrigue with Dayton still alive on one side of the bracket and regular season champ Davidson on the other. After beating Fordham, it feels like the Wildcats are going to be in no matter what. Bubble teams will be rooting for Davidson and wouldn’t mind seeing Dayton fall to Richmond in the semis.

• AAC – The only team still alive that isn’t in the at-large mix is Tulane, who faces Houston on Saturday.

• ACC – More on Virginia Tech below, but bubble teams would love to see Duke dominate the Hokies in the finals.

• SEC – Texas A&M has played itself into the conversation, which means bubble teams will be rooting for the Hogs on Saturday afternoon

My plan is to spend the day watching hoops and scrubbing the seed list, which may lead to some minor changes in Sunday morning’s update.

Gonzaga has essentially locked up the top overall seed, while Arizona’s win over Colorado on Friday helped the Wildcats tighten their grip on the second top seed. They would stay on the top line even with a loss to UCLA in the Pac-12 title game.

Meanwhile, Auburn’s loss on Friday coupled with Baylor’s Thursday defeat has opened the door for both Kansas and Kentucky to earn one seeds depending on how they play in their respective conference tournaments. If the Jayhawks win the rubber match against Texas Tech on Saturday, they will claim a spot on the top line, and the same holds true for Kentucky, who faces Tennessee in the semis on Saturday. If one or both of them fail to win their conference tournaments, Baylor would be the likely beneficiary. It feels like Auburn lost its chance at a one seed by losing to Texas A&M on Friday.

The projections below are based on all games played through March 11, 2022. Following the bracket, I included a few thoughts on the last four in and first four out.

Michigan – Wednesday’s loss to Indiana dropped the Wolverines to just three games over .500, and the list of teams who have earned at large bids with such a record isn’t long once you look past last season. The metrics suggest the Wolverines are tournament-caliber, but their grip on a spot is precarious thanks to that 17-14 overall record. Michigan does have six wins in the top two quadrants and just one “bad” loss. I think if the Wolverines are selected, they will wind up in Dayton even.

Xavier – The committee no longer formally places additional weight on the final 10-12 games of the season, and the Musketeers are hoping they are true to their word after going 2-8 down the stretch, culminating in a late collapse and OT loss to Butler. That said, Xavier does still have five Q1 victories and is 9-11 in the top two quadrants with a pair of Q3 losses. Eight of their 13 total losses fall in quad 1 and 11 of them are against teams in the top 70 of the NET, and they have five wins over at-large teams in the field plus a win over Virginia Tech. None of their metrics stand out in one way or the other, but it’s shaping up to be a long couple days of waiting for the Muskies.

Notre Dame – Following in the footsteps of Wake Forest, the Irish dropped their ACC tournament opener, in this case to Virginia Tech. Despite finishing 15-5 in the ACC, the Irish aren’t totally safe. They are just 4-9 in the top two quadrants with only three wins against the at-large field (vs. Kentucky, at Miami, vs. North Carolina). A Q3 loss at Boston College doesn’t help matters, but a 7-5 mark in true road games certainly does. Ultimately the overall lack of quality wins in a down ACC is the biggest issue, which may leave ND on the outside looking in.

Rutgers – The Scarlet Knights have one of the oddest profiles I can recall and is one that will be scrutinized closely after Friday’s loss to Iowa. They have six Quad 1 victories, but they are hovering just outside the top 75 of the NET, which would be the lowest ever for an at-large team. A three-game November losing streak (at DePaul, vs. Lafayette, at UMass) accounts for three of Rutgers’ four worst losses with the Lafayette game falling in Quad 4. Still, Rutgers has a slew of solid home wins to go with road wins in Madison and Bloomington. Despite those great victories, Rutgers doesn’t boast great marks in the resume or quality metrics. Similar to Michigan, if the committee puts Rutgers in, I don’t see any way they won’t be in Dayton.

Virginia Tech – For the Hokies, the on-court results are finally starting to match up with the predictive metrics following wins over Notre Dame and North Carolina. That sets up a matchup with Duke in the finals, and based on their overall profile, I am inclined to think the Hokies need to win the auto-bid in order to go dancing. They now have four wins over teams in the at-large picture, two of which have come this week, but a pair of quad 3 losses are certainly a mark against them.

Oklahoma – After falling behind against Texas Tech on Friday, the Sooners nearly completed the comeback, and a win there likely would have landed them in the field. As it stands, they are now just 18-15 with 12 of those 15 defeats falling in Q1, while a Q3 loss to Butler is the worst loss on OU’s profile. The Sooners boast three Q1A victories thanks to a home win over Texas Tech and neutral court wins over Baylor and Arkansas. Among the issues for OU is the fact that the Sooners are 12-15 in Q1-3.

Texas A&M – The Aggies have come back to life following a 1-9 stretch in the middle of the season, culminating in Friday’s win over Auburn to propel them into the bubble mix. Still, they are just 3-9 in Q1 but have a solid 8-9 mark in the top two quadrants. A pair of Q3 home losses are among the blemishes on A&M’s profile. They have a trio of strong wins (vs. Arkansas, at Alabama, Auburn on a neutral floor) plus a neutral court win over Notre Dame. The Aggies rank around 50th in all of the team sheet metrics, which suggests a loss to Arkansas in the semis would likely spell doom for A&M.

Wake Forest – While Wake’s predictive metrics are solid, a closer look at its profile reveals a relative lack of quality wins. The Deacons’ only Q1 victory came at Virginia Tech, and the only other wins against at-large teams in the field both came at home against North Carolina and Notre Dame. Throw in a really poor non-conference strength of schedule, and Wake Forest’s case feels tenuous. They do have a .500 record away from home at 5-5 on the road and 2-2 in neutral court contests, but they also have a pair of quad 3 losses. Steve Forbes has done a tremendous job in his brief tenure in Winston-Salem, but there are plenty of reasons to believe they will end up on the outside looking in come Sunday. As with any team near the cutline, I’ll be taking a closer look at their resume in the coming days.