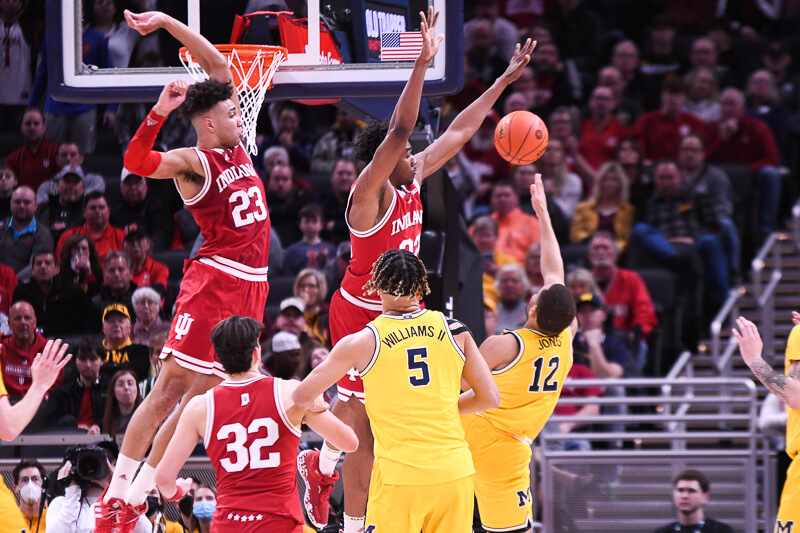 Indiana overcame a 17-point second half deficit to beat Michigan 74-69 on Thursday in the 2022 Big Ten tournament at Gainbridge Fieldhouse. The win snapped a nine-game losing streak to the Wolverines.

Trayce Jackson-Davis dominates the second half

Through the first half of Thursday’s rematch with Michigan, it looked like Hunter Dickinson would again get the better of Indiana’s Trayce Jackson-Davis.

Dickinson, who got the better of Jackson-Davis in two previous matchups in Bloomington, was dominating him against at Gainbridge Fieldhouse.

The Michigan center had 13 points and three rebounds as Michigan led Indiana 41-28 at intermission. Jackson-Davis, meanwhile, had just five points on 2-of-6 shooting in 16 minutes.

But after being challenged by Mike Woodson at halftime, Jackson-Davis responded with one of his best halves of the season.

Down the stretch, Jackson-Davis was unstoppable and Dickinson was invisible. The Center Grove product scored 19 second half points as Indiana roared back from a 17-point deficit in a must-win situation. Dickinson took just three shots in the second half, scoring only two points.

“I thought he responded extremely well and we needed that,” Woodson said postgame. “I mean, I think Trayce is a hell of a player, man. He’s one of the best players in the Big Ten and I didn’t think he played that way the first half. Second half he stepped it up and played like we thought he could play.”

It was the type of performance Indiana will need again from Jackson-Davis on Thursday when the Hoosiers take on top-seeded Illinois in the quarterfinals of the Big Ten tournament.

Geronimo changes the game defensively for Indiana in the second half

It’s not often that Indiana gets a boost when it removes Race Thompson from the lineup, but that’s exactly what transpired in the second half on Thursday.

Thompson logged just 20 minutes before being pulled for Jordan Geronimo with 12:28 to go and the Hoosiers trailing 60-43. Indiana had been outscored by 20 points with Thompson on the court when he was removed.

Geronimo’s versatility defensively was a major reason Indiana rallied. He was all over the court defensively and blocked a couple of shots. He also made two free throws to get the Hoosiers within 12 with 10:30 to play.

By the final horn, Indiana had outscored Michigan by 21 points with Geronimo on the floor, which was easily Indiana’s best plus-minus of the afternoon.

“JG, he’s an energy guy. He’s someone that’s going to come in and get rebounds,” Jackson-Davis said. “I saw him when I was going up to get some of them, he was a whole head above me, so he’s huge for us. He blocks shots, and then he’s a positive influence on the floor.”

Xavier Johnson continues to peak at the right time

Xavier Johnson only earned All-Big Ten honorable mention honors this week when the league’s postseason awards were announced, but is playing as well as any point guard in the league.

Due to two fouls that sent him to the bench for the final 11:16 of the first half, Johnson’s impact in the first half was minimal.

But the second half was one of Johnson’s best of the season. After he was whistled for his third foul with 18:05 to go, Johnson waved to the bench to keep him on the floor. He was removed at the 16:40 mark, but returned with 14:40 to play and didn’t go back to the bench for the rest of the afternoon.

In the last two games, the combination of Johnson and Jackson-Davis in ball screens has produced some of Indiana’s best offensive possessions all season.

“He did a really good job of reading the defense and where he was picking his spots,” Juwan Howard said. “When guys were on the screens, he took the shot. “When there was opportunities where he could get in the paint, whether he was trying to make a layup, if that wasn’t open, he was throwing a lot to Trayce. And with those two, any type of ball screen action, it’s like we practiced, it’s like we talked about, it’s like we watched on film, they’re extremely effective.”

Indiana locks down Michigan in the second half

Michigan had its way offensively with Indiana through the first 27-plus minutes on Thursday.

Leading the Hoosiers 60-43 with more than 12 minutes to play, Michigan was scoring 1.28 points per possession. Indiana, which had the best defense in the Big Ten in the regular season, was out of position often and looked a step slow.

But as the Hoosiers started to get some stops, confidence grew and Michigan began to look tentative.

Over the last 12:52, Michigan scored just nine points. The Wolverines missed 15 of their last 17 shots. By the final horn, Michigan had scored just .99 points per possession.

Turnovers were a big part of Indiana’s success defensively down the stretch. Michigan turned it over 10 times in the second half which led to 17 points for the Hoosiers.

Indiana’s chances to earn an at-large bid were likely over with a loss on Thursday. But the 17-point second half comeback keeps the Hoosiers squarely on the tournament bubble.

Andy Bottoms, one of the Web’s top bracketologists, had the Hoosiers as the third team out of the field entering Thursday’s game.

The win over Michigan falls into Quad 1, which is a significant development for the program’s tournament chances.

It’s possible that the Hoosiers played their way into the field with Thursday’s win, but a win over Illinois would likely clinch IU’s first tournament bid since 2016.

“I don’t know how the selection committee works,” Woodson said Thursday. “But I’ve just got to tell our guys we’re still playing and we’ve still got to play hard and try to win.”