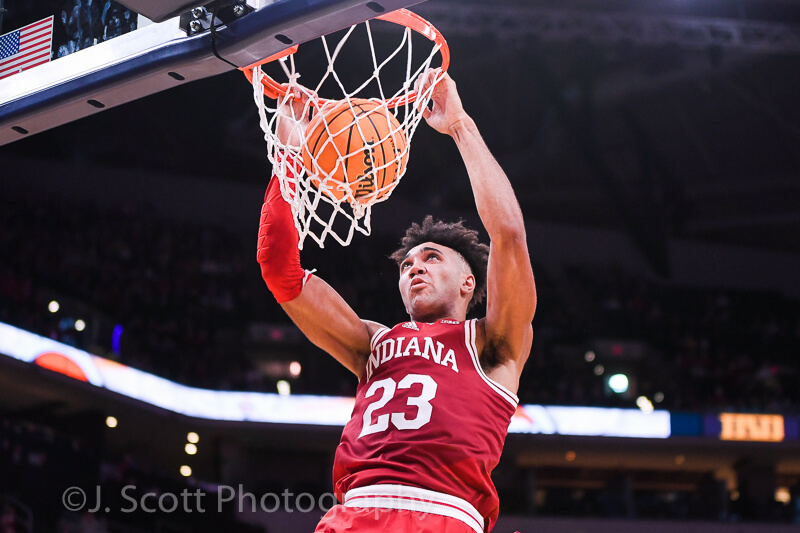 Thanks to the rare Monday night IU game, this week’s projections won’t have much of a writeup, but this is typically the time of year when I roll out my first set of in-season bracket projections.

While this season hasn’t been quite as ravaged with COVID pauses, it’s still been challenging due to various schedule changes as well as instances when key players have not been available. The committee has said they intend to take these absences into account as they always do, but the members will certainly have their work cut out for them this year.

From a conference perspective, the Big Ten and Big 12 lead the way with eight teams each, followed closely by the Big East with seven.

The projections below are based on all games played through January 17, 2022. Following the bracket, I included a few thoughts on the last four in and first five out. One note here is that BYU had to be moved down to the eight line to accommodate the fact that they can only play in locations with games on Thursdays and Saturdays.

Belmont – The Bruins were smashed by Murray State over the weekend, but they do have a reasonable at-large case with four Q1/Q2 wins, including victories over Chattanooga, Iona, and Saint Louis. There is little margin for error since virtually any OVC loss will hurt Belmont’s chances, and the game at Murray State in late February is going to be an important one.

Mississippi State – Saturday’s home win over Alabama gives the Bulldogs a marquee victory to help bolster their at-large case. Outside of a home win over Arkansas, there isn’t a ton on MSU’s profile, which also features just one true road game to date. Wednesday’s trip to Gainesville is a key game for both teams.

Oregon – After a 6-6 start, the Ducks have ripped off five straight wins, including back-to-back road wins at UCLA and USC. They also have a decent home win over SMU, while a home loss at the hands of Arizona State falls in Q3. With four straight home games coming up, Oregon has a great chance to extend its winning streak.

Minnesota – The Gophers have now lost four straight following a 10-1 start and are clinging to an at-large bid. All five losses fall in Q1, while road wins at Mississippi State and at Michigan are their only victories in the top two quadrants. Minnesota currently sits just outside of the top 75 of the NET, which suggests the Gophers need to recapture their early-season magic in a hurry.

Wyoming – The Cowboys are off to a 12-2 start, but their best wins have come at Grand Canyon, at Utah State, and at Nevada. They rank in the top 30 of the NET, but there just aren’t enough quality wins on Wyoming’s profile yet. In their lone game against an at-large candidate, the Cowboys lost by nearly 30 at Arizona.

Texas A&M – The Aggies boast an impressive 14-2 mark, but just two of those victories have come against top 100 teams in the NET (home vs. Arkansas and Notre Dame on a neutral floor). The next three games are critical for A&M, as the Aggies host Kentucky and then travel to Arkansas and LSU.

UAB – Road wins at North Texas and at Saint Louis both fall in Q1, but a Q3 loss at Rice and a 2-3 mark against the top two quadrants don’t help matters. All four of the Blazers’ losses have come by six points or less, but they need to keep stacking wins in C-USA play to go with their solid computer numbers.

Florida – Four of the Gators’ six losses fall in Q1, but they are just 4-5 against the top three quadrants and lost at home to Texas Southern. A last-second win over Ohio State is Florida’s lone victory over an at-large team, but luckily the SEC will provide plenty of opportunities to move the needle.

Boise State – The Broncos have won nine straight after a slow start, but they have yet to win (or even play) a Q1 game. They have a 3-3 mark vs. Q2, but none of those games have come against teams in the at-large mix. Throw in a Q4 home loss to Cal St. Bakersfield, and that leaves Boise State on the wrong side of the cut line.