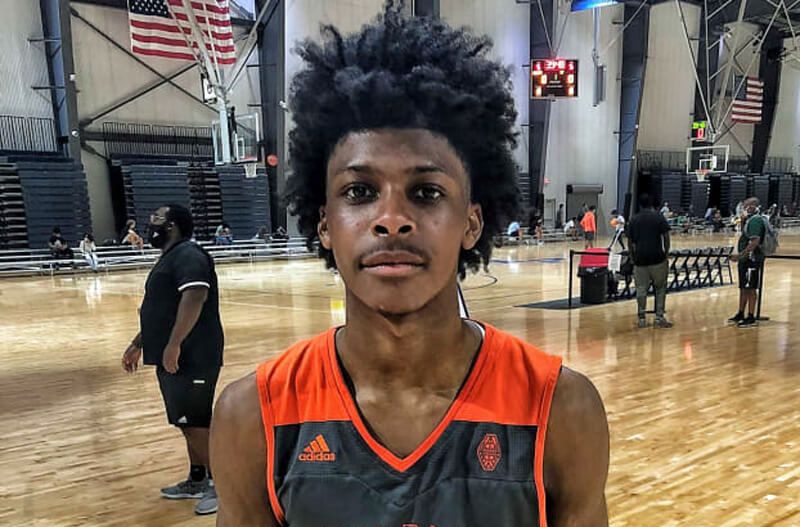 Indiana offered scholarships to a pair of class of 2023 guards over the weekend.

London Johnson, a 6-foot-4 point guard from Norcross (Ga.), and Reed Sheppard, a 6-foot-3 combo guard from North Laurel (Ky.), both reported offers from the IU staff via their Twitter accounts.

Johnson is currently unranked by the 247Composite and Sheppard, the son of former University of Kentucky standout Jeff Sheppard, is rated the No. 53 player nationally.

Johnson, who plays for Game Elite on the adidas 3SSB circuit, reported a slew of new scholarship offers over the weekend as a result of his play in front of college coaches. In addition to the IU offer, Johnson also reported new offers from Tennessee and Ole Miss.

Here’s what Brandon Jenkins of 247Sports wrote about Johnson over the weekend:

A lengthy point guard prospect with a slight frame, Johnson is a high-floored prospect who is intriguing due to his long-term tools. He owns a solid skillset scoring the basketball from each level of the floor when the option is there. He plays with an even keel at all times as he is very cerebral and displays great feel as a passer.

What makes Johnson so intriguing is the upside he has left to discover. His body still has yet to fully mature but he has the early intangibles and skill set that makes it hard for high coaches not to bank on. There are not many guards in the class that possess Johnson’s level of upside as he has a bright future as a lead guard at the high major level if he continues to develop.

Blessed to receive an offer from Indiana University!! #gohoosiers pic.twitter.com/eLLoQDWrAT

Sheppard added an offer from Kentucky on July 9.

The top in-state player from the class of 2022 made his college decision over the weekend.

Gary West forward Jalen Washington, the No. 21 player in the country according to the 247Composite, committed to Hubert Davis and North Carolina on July 9.

Washington picked the Tar Heels over Purdue, Indiana, Stanford and several others.

Indiana’s recruitment of Washington never progressed much in the months following the coaching change. Washington took official visits to North Carolina and Stanford in June after the moratorium on in-person recruiting was lifted.

Tyrell Ward, a class of 2022 forward from DeMatha (Md.), will announce his college decision on Monday afternoon.

Ward, the No. 49 player in the country according to the 247Composite, narrowed his list of schools to eight in June. Indiana was among those eight schools along with Georgia, Georgetown, LSU, Maryland, Miami (FL), Virginia Tech and Xavier.

The 247 Crystal Ball has Xavier as the heavy favorite to land a commitment from Ward.

No mention of Indiana from four-star forward Kyle Filipowski

Class of 2022 Wilbraham and Monson Academy (Mass.) forward Kyle Filipowski, who took an official visit to Indiana in June, didn’t mention the Hoosiers among his top suitors in an interview with Dushawn London over the weekend.