What To Expect: Michigan State 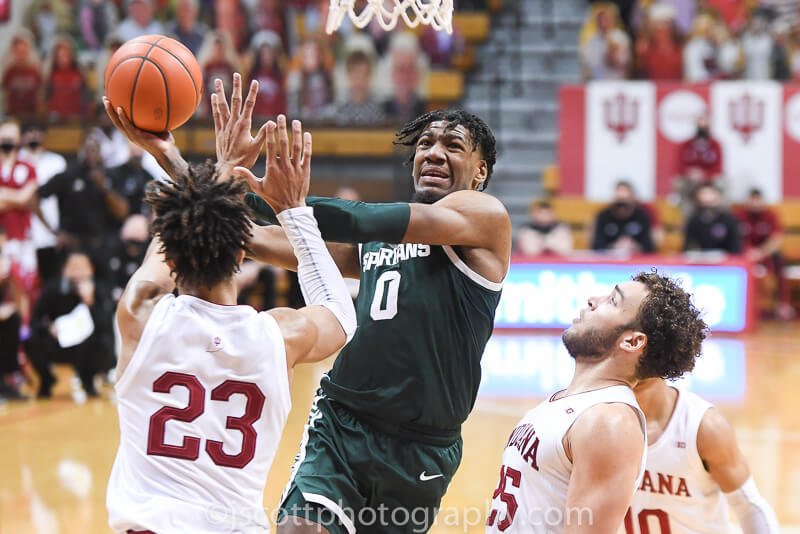 Indiana will look to snap its three-game losing streak when it takes on Michigan State on Tuesday night at the Breslin Student Events Center in East Lansing. The Spartans are 13-10 overall, 7-10 in Big Ten play and are coming off of a 73-55 loss at Maryland on Sunday afternoon.

Tuesday’s game will tip at 8 p.m. ET on BTN with Brandon Gaudin and Robbie Hummel on the call:

Tuesday’s game in East Lansing, originally scheduled for January 17, is shaping up to be an elimination game for two bubble teams. Indiana and Michigan State are both 7-10 in conference play and on the wrong side of the NCAA tournament bubble in most projections.

Indiana has dropped three straight games while Michigan State had its three-game losing streak snapped on Sunday in College Park. Both teams have wins over elite teams, but the sheer volume of losses and below .500 records in league play looms large.

The Spartans will close the regular season with back-to-back games against Michigan and probably needs to go 2-1 in its final three games to feel decent about its tournament chances. The Hoosiers, meanwhile, went 3-5 in February and appear to be cratering as the regular season comes to a conclusion.

It was only 10 days ago that Indiana and Michigan State met in Bloomington with the Spartans pulling away in the second half for a 78-71 victory.

That contest was a tale of two halves as Indiana raced to a 19-6 lead in the first half before crumbling defensively. Michigan State entered the game in Bloomington with the Big Ten’s 13th best offense. But the Hoosiers offered very little resistance, particularly in the second half, as Michigan State exploded for 52 points (1.49 points per possession) after intermission.

Indiana had no answer for Ben Davis product Aaron Henry, who exploded for 27 points in the win. It’s a matchup that will be top of mind for the Hoosiers entering the rematch and given the absence of Armaan Franklin, one that IU simply may not have an answer for.

In addition to Henry’s outburst, Michigan State’s other guards also fared well in the first matchup. Joshua Langford and Gabe Brown each scored 14 points. Brown hit a trio of 3-pointers and several of them were uncontested looks as Indiana’s defense was caught out of position.

Indiana did get a career afternoon out of Trayce Jackson-Davis in Bloomington. The Center Grove product exploded for 34 points, which accounted for 47.8 percent of IU’s points in the loss. Based on how Michigan State chose to guard Jackson-Davis, it certainly seemed like the Spartans were willing to let him do damage while holding down the rest of the roster.

• Can Indiana shore things up defensively? Indiana’s defense in Big Ten play has been underwhelming. The Hoosiers rank 12th in points per possession allowed in conference play. Only Minnesota and Northwestern have been worse defensively. If Indiana is going to win another game this season, it will need to defend at a much better rate than it has in recent weeks. Over its last three games, Indiana has given up 1.13, 1.05 and 1.14 points per possession.

• Guards must come through: Al Durham Jr. contributed a team-high 15 points in Saturday’s loss to Michigan, but the rest of Indiana’s backcourt struggled to do much of anything. Khristian Lander was a bit of a bright spot off the bench with seven points, but Rob Phinisee continues to lack confidence. Given that Franklin is now expected to be out for the remainder of the regular season, Indiana needs someone to step up in his absence. Indiana has been at its best this season when balanced offensively, but that hasn’t happened nearly enough.

• Capitalize off of turnovers: Michigan State is one of the most turnover-prone teams in the Big Ten and early in the first matchup, the Spartans couldn’t take care of the ball. That was a big reason Indiana got out to a 19-6 lead before collapsing in the second half. The Spartans will likely continue turning the ball over at a high rate, but will Indiana be able to take advantage of those mistakes?

The KenPom projection is Indiana by 1 with a 51 percent chance of a Hoosier victory. The Sagarin ratings like Michigan State by two and the Vegas line opened with Michigan State as a four-point favorite. As of Tuesday morning, the Spartans are favored by 3.5.

While anything can happen in next week’s Big Ten tournament in Indianapolis and there will be plenty of opportunities for both teams to pick up resume-building wins, many are billing tonight’s contest as an elimination game for the tournament.

Michigan State had been red hot entering Sunday’s game at Maryland, but appeared to hit a wall in that loss. Today’s game is Michigan State’s fifth in the last 10 days. Indiana, meanwhile, is without its second-best player in Franklin and its defensive problems have worsened as the conference schedule has progressed. The winner of tonight’s game will likely be the team who fares best at taking care of the ball and converting from the free-throw line.