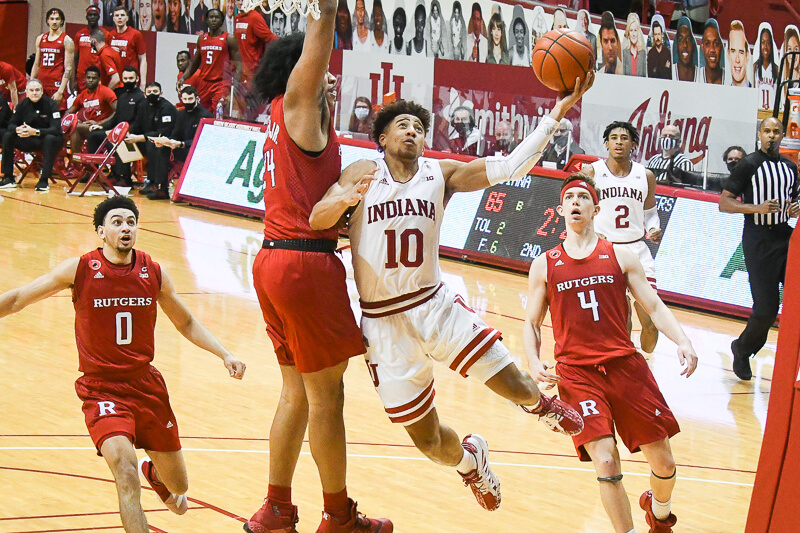 Indiana suffered an embarrassing 74-63 loss at Rutgers Wednesday night that will significantly narrow its path to make the 2021 NCAA tournament.

• Indiana’s fast start quickly disappears: With 9:42 remaining in the first half, Indiana had grown its lead to 23-8 and the Hoosiers were firing on all cylinders. Al Durham knocked down four early 3-pointers and Indiana’s defense was stringing together multiple stops.

But then the momentum of the game suddenly shifted and Rutgers took control of the game. The Scarlet Knights closed the half on a 27-8 run and held a four-point advantage at halftime. Indiana looked out of sorts on both ends of the floor and Rutgers was in an unstoppable rhythm. It continued into the second half, too.

“Right from the start, we weren’t ready out of halftime,” Indiana head coach Archie Miller said.

In the second half, the Hoosiers shot just 30 percent from the field while Rutgers converted on 48 percent. The Rutgers lead swelled up to 20 points and the Hoosiers’ chances were done. Earlier in the season, Indiana was able to fight back in deficits, but that wasn’t the case on Wednesday.

“Whether it’s a lack of confidence offensively or things start to become difficult for us, our response isn’t to run harder, to talk more to concentrate more, to talk about the things that we can control,” Miller said.

• Turnovers and free throws hurt Indiana yet again: As it has been the case all season, taking care of the ball and converting from the free throw were major issues.

Entering the game, Miller said that Indiana needed to limit its number of turnovers to 10. Instead, the Hoosiers gave up the rock 13 times, nine of which were in the first half. It led to 13 Rutgers points. Most of the giveaways were as a result of sloppy passes. Rob Phinisee and Khristian Lander had three turnovers apiece. Durham and Trey Galloway each had two.

“I thought their pressure really rattled us tonight,” Miller said. “We had a hard time functioning cleanly on offense and a lot of it had to do with, I thought, their ability to pick up the ball and really work.”

On the free throw line, Indiana went just 11-for-18. Trayce Jackson-Davis made 7-of-11 and Galloway made 2-of-4. The only other two Hoosiers to get to the line were Jerome Hunter and Durham.

• Another defensive breakdown: One game after allowing Michigan State to score 52 points in the second half, Indiana’s defense crumbled again. The Hoosiers were slow on defensive rotations, leaving Rutgers’ shooters wide open on the perimeter. Pick and rolls led to easy dunks. Indiana was outscored in the paint 36-24.

Indiana was unable to contain Ron Harper Jr. and Geo Baker, who both went for 20 points. Harper Jr. entered the game having made just two 3-pointers in his last eight contests. On Wednesday, he hit four 3-pointers. Baker knocked down six of his own from beyond the arc and dished out 10 assists.

“The thing that’s disappointing right now is when things don’t go well for us, the thing that we’ve hung our hat on and been able to do is really scrap, compete and find a way to make it anybody’s game,” Miller said. “And in our last two second halves, in particular when things haven’t gone well, our defense and our tightness, our ability to communicate, our response hasn’t given us a chance.”

There was also essentially no resistance in the paint. The Hoosiers didn’t record a single block while Rutgers racked up 10.

Jordan Geronimo was Indiana’s third-highest scorer with nine points, but most of his production came in the final few minutes when the game was out of hand. Race Thompson had just two points and Rob Phinisee was held scoreless.

Overall, Indiana shot just 36 percent from the field. They tallied 15 total assists in comparison to Rutgers’ 22. The lone statistical bright spot for the Hoosiers was shooting 44 percent from deep.

“It’s a humbling game, it’s a humbling second half,” Miller said. “I think that it’s the first time all season long that our team has really looked fractured where we didn’t know how to compete, what to do and that goes back to me. I have to figure this out and get this team back off the mat because we have a big finish.”

In early January, Franklin went down after turning his ankle and was forced to sit out multiple games. Since then, he hasn’t been playing at full strength.

Franklin has been one of the Big Ten’s most improved players this season and entered Wednesday averaging 12.2 points, 4.4 rebounds and 2.2 assists per game. If Franklin is unable to play the rest of the season, it’ll be a huge loss for an Indiana team that has its back up against the wall.

“Just in general right now, I think that we’re searching for an emotional guy,” Miller said. “A guy that we can look to that can rally us. We’re a quiet group in general and I don’t think that we have an alpha personality, but I definitely think right now that we need some guys to step up.”