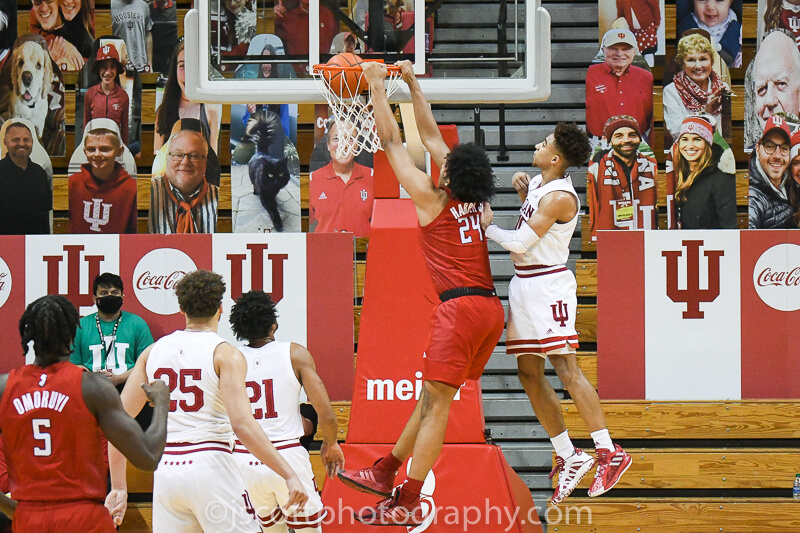 Ladies and gentlemen, boys and girls, we’ve reached the low point of the season.

This was a disastrous performance from the Hoosiers tonight, a re-run of how things went against Michigan State, yet somehow worse. Just as it did against the Spartans, Indiana looked strong out of the gate. The defense locked in and applied pressure. On the other end, Trayce Jackson-Davis and Al Durham were hot. Durham hit his first three 3-point attempts while Jackson-Davis got going in the pick-and-roll.

Durham’s third early 3 put Indiana up 23-8 at the 9:42 mark. But it all changed in the wrong direction from there, another early, large lead from Indiana washed away, never to return.

IU’s offense started getting tight. It missed long 2s and turned the ball over, allowing some runouts for the Scarlet Knights where they scored against Indiana’s transition defense. Rutgers really started to heat up from deep, hitting seven of their last eight of the half after an 0-for-7 start. What was once a 15-point lead turned into a 35-31 deficit at the break as Rutgers closed out the half on a 27-8 run. A Jackson-Davis defensive rebound was stolen right out of his hands by Paul Mulcahy in the final seconds, who scored the ball right before the buzzer.

Armaan Franklin’s ankle appeared to keep him off the floor for the final 20 minutes of the game, something Archie Miller confirmed after the contest (though he said it was a foot or Achilles issue). No matter, a superhuman performance from the sophomore probably wouldn’t have saved the Hoosiers in the second half.

Rutgers extended the lead out to 20 points twice, as Indiana showed little defensive resistance, just as it did against Michigan State. Ron Harper Jr. and Geo Baker were particularly a tough cover for the Hoosiers tonight. Harper Jr. broke out of a 3-point shooting slump to hit 4-of-7 from deep on his way to 20 points on 8-of-12 shooting overall. Baker splashed in six 3-pointers of his own to help match Harper Jr. at 20 points. Rutgers shot 39.8 percent from deep for the contest and got contributions inside from Myles Johnson (10 points) on its way to 1.05 points per possession.

Indiana bounced back after a poor 3-point shooting mark against Michigan State to hit 8-of-18 (44.4 percent) from deep. But the Hoosiers shot just 61.1 percent from the line (11-of-18) and only 32.6 percent for the game on 2-point shots. That included three misses from Khristian Lander at the rim, who seems just about cursed at this point. The freshman is just 1-of-17 on 2-point shots this season. Rob Phinisee went scoreless, missing all seven of his shot attempts.

What was particularly concerning about the second half is Indiana’s spirit seemed defeated. The Hoosiers showed little fight as Rutgers continued to mount its lead.

“It was a humbling second half,” Miller said in his post-game press conference. “I think that this is the first time that we’ve looked fractured.”

Miller also offered this: “When things aren’t going well … our response isn’t to run harder, to talk more, to concentrate more, to talk about the things we can control.”

That right there about sums it up for this Indiana team. Once things get going bad, the Hoosiers just can’t seem to right themselves and rise above it — especially of late.