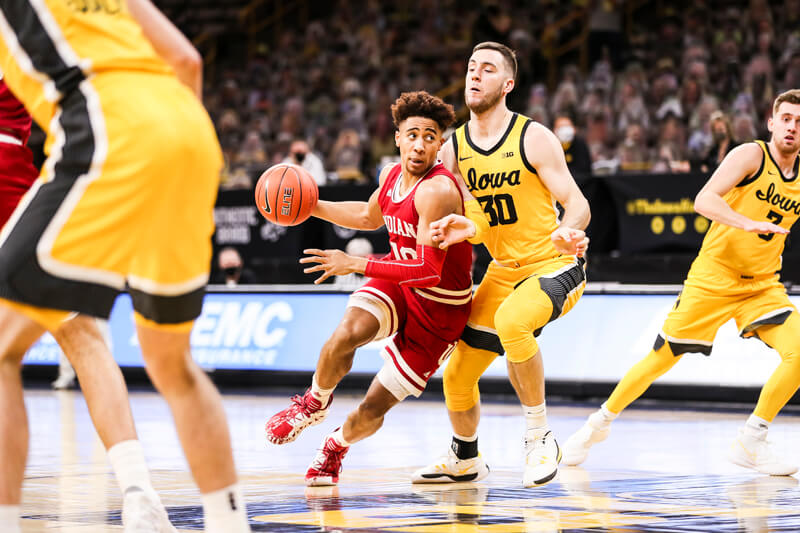 Indiana will look for its first win in more than two weeks when it hosts Iowa on Sunday at Simon Skjodt Assembly Hall. The Hawkeyes have lost three of their last four games and are 13-5 overall and 7-4 in Big Ten play.

Sunday’s game will tip at 12 p.m. ET on FOX with Gus Johnson and Bill Raftery on the call:

At just 9-8 overall, Indiana’s path to an at-large NCAA tournament bid is clear: the Hoosiers need to start winning now.

After beating Iowa 81-69 on Jan. 21 in Iowa City, the Hoosiers dropped back-to-back home games to Rutgers and Illinois. Indiana is now just 2-4 in home Big Ten games. Bart Torvik’s Tourney Cast currently gives the Hoosiers a 34.9 percent chance to earn an at-large bid to next month’s tournament, which will be played entirely in Indiana.

Sunday marks another opportunity for a quad 1 win in the NET rankings for the Hoosiers, who are currently 1-7 in such games. Iowa comes to Bloomington on a skid of its own with losses in three of its last four. Iowa’s only win since Jan. 17 is over Michigan State, which has lost four straight and hasn’t won a game in over a month.

Indiana’s victory at Iowa on Jan. 21 was its best performance of the season and one of the best wins for the program under Archie Miller.

Indiana limited Iowa to 1.01 points per possession in the win and a dreadful 5-of-23 shooting performance from the perimeter. The Hoosiers have struggled to close out tightly contested games this season (Florida State, Wisconsin, Illinois, Rutgers, Northwestern), but were able to grab a lead in Iowa City late and maintain it.

One of the keys to Indiana’s win at Carver-Hawkeye Arena was its ability to shut down Iowa’s secondary scoring options. Luka Garza went for 28 points and 12 rebounds, but the Hoosiers were able to limit Joe Wieskamp to just one point in the second half and completely shut out Jordan Bohannon.

Bohannon, who has been no stranger to hitting big shots against Indiana throughout his career, missed all eight of his 3-point attempts in the first matchup. In his three games since, he’s 7-of-16 on 3s.

Another key for Indiana was the production it received from Rob Phinisee and Al Durham Jr., who have been inconsistent this season. Phinisee went scoreless in Tuesday’s loss to Illinois but played his best game of the season in Iowa City with 18 points, three assists, three rebounds, three steals, and no turnovers in 32 minutes. Durham, meanwhile, made nine of his 10 free throw attempts, finished with 14 points, and didn’t commit a turnover.

Indiana also had a season-low eight turnovers in Iowa City and shot 8-of-17 on 3s, which were two big factors that allowed it to overcome an awful free throw shooting performance. The Hoosiers beat the Hawkeyes by 12 despite shooting only 21-of-35 from the free throw line.

• Guard play, guard play, guard play: Indiana’s inconsistent performances from its guards have led to inconsistent results. With Armaan Franklin limited due to an ankle injury, his shooting percentages and scoring output have been on the downswing. Franklin is just 17-of-45 from the field over his last four games. Credit Franklin for continuing to play when he’s clearly not at 100 percent, but Indiana needs some of its other guards to pick up the slack. Phinisee and Durham’s inconsistencies have been well documented, but the reality is that Indiana is not going to beat good teams with both of them playing poorly.

• A more efficient Trayce: Trayce Jackson-Davis has struggled shooting from the field over his last two games, which were both losses for the Hoosiers. The Center Grove product is just 10-of-28 from the field since the Iowa win at Carver-Hawkeye Arena. Jackson-Davis seems to struggle the most when an opponent has a physical shot-blocking presence at the rim, which shouldn’t be the case with Luka Garza. Jackson-Davis is 15-of-26 from the field in two career games against Garza and the Hawkeyes.

• Focus on limiting open 3s and slowing down non-Garza Hawkeyes: Garza is coming off a season-low 16 points in an 89-85 loss to Ohio State on Thursday, but is still averaging close to 26 points per game and is the frontrunner for national player of the year. Iowa is at its best offensively when its secondary scoring options like Wieskamp, Bohannon and others are splashing in 3s from the perimeter. Indiana did a good job containing those secondary scoring options in Iowa City, but can the Hoosiers repeat that performance again in Bloomington?

Both teams come in desperate for a win given their recent struggles. The Hoosiers and the Hawkeyes have both lost three of four and face difficult schedules the rest of the way. Iowa is a lock to make the NCAA tournament, but the Hawkeyes face the real possibility of a free fall seeding wise if they don’t turn things around soon. Iowa still has road games to play at Wisconsin, Ohio State and Michigan.

Indiana, meanwhile, is looking to avoid its first three-game losing streak of the season. Tuesday’s loss against Illinois was demoralizing because it was IU’s third straight in league play at home and it was also a blown opportunity for a resume win against a team that was without its best player (Ayo Dosunmu) for the closing minutes of regulation and all of overtime.

The KenPom projection is Iowa by three with a 40 percent chance of an IU victory and Sagarin also likes the Hawkeyes by three.