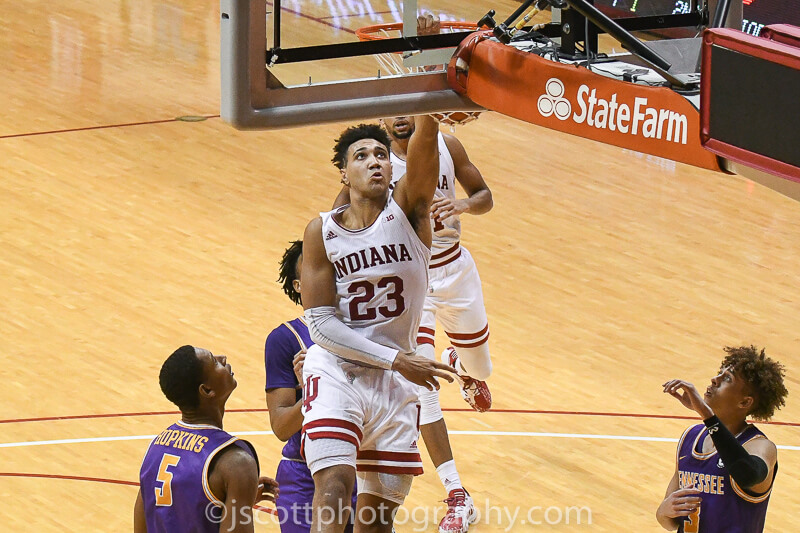 Indiana sophomore forward Trayce Jackson-Davis has been named to the 50-man watchlist for the John R. Wooden Award.

Jackson-Davis, who is averaging 21.5 points, seven rebounds, 1.5 assists and 1.3 steals in 30.3 minutes per game, was also named to watchlists for the Karl Malone Award, the Naismith Award and the NABC player of the year in recent weeks.

Here’s the full release, which was issued last week:

LOS ANGELES, Calif. (December 1, 2020) – The John R. Wooden Award® presented by Wendy’s® announced its Preseason Top 50 Watch List today on ESPN’s SportsCenter and on ESPN.com. Chosen by a preseason poll of national college basketball experts, the list is comprised of 50 student-athletes who are the early front-runners for the most prestigious honors in college basketball, the Wooden Award All American Team™ and Most Outstanding Player Award.

The Preseason Top 50 represents 11 conferences. The Big Ten leads all conferences with ten selections, followed by the ACC and SEC with seven apiece, the Big 12 and PAC-12 with 6 each, the Big East with four, the Atlantic 10 and WCC with three apiece, the American with two selections, and the Mountain West and Conference USA with one selection each.

The players on the list are considered strong candidates for the 2021 John R. Wooden Award Men’s Player of the Year presented by Wendy’s. Players not chosen to the preseason list are still eligible for the Wooden Award™ midseason list, late season list, and the National Ballot. The National Ballot consists of 15 top players who have proven to their universities that they meet or exceed the qualifications of the Wooden Award. Nearly 1,000 voters will rank in order 10 of those 15 players when voting opens prior to the NCAA Tournament and will allow voters to take into consideration performance during early round games. The Wooden Award All American Team™ will be announced the week of the “Elite Eight” round of the NCAA Tournament. The winner of the 2021 John R. Wooden Award will be presented by Wendy’s following the NCAA Tournament in April.