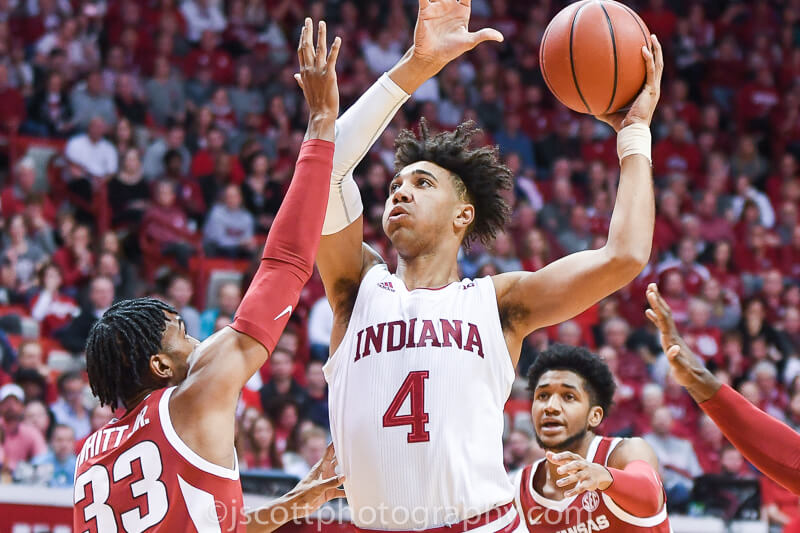 Indiana sophomore Trayce Jackson-Davis has been named to the 50-man watch list for the 2020-2021 Naismith Trophy, it was announced on Thursday morning.

Here are some details from IU:

Among the candidates is Indiana sophomore forward and Preseason All-American Trayce Jackson-Davis. A graduate of Center Grove High School, Jackson-Davis was named third-team All-Big Ten after he started all 32 games and averaged a team-high 13.5 points for the Hoosiers last season. He was one of only four freshmen in the country to lead his team in scoring, rebounding, free throw percentage and blocks. He finished second in the league in field goal percentage (56.6), and 7th in blocked shots (1.9) and rebounds (8.4). He also led the team with 115 free throws made in 168 attempts and set an IU freshman record with 270 rebounds. He led the team with 59 blocked shots. He also was named to the Big Ten All-Freshman team. He also is on the watch list for the Karl Malone Award.

Hoosier legends Scott May (1976) and Calbert Cheaney (1993) are former recipients of the award. Victor Oladipo was a finalist for the honor in 2013.

And from the Naismith Trophy’s media release:

ATLANTA (November 19, 2020) – The Atlanta Tipoff Club announced today the 2021 Jersey Mike’s Naismith Trophy Watch List, which includes the 2020 Jersey Mike’s Naismith High School Trophy winner, Cade Cunningham, now a freshman at Oklahoma State University, the 2020 Naismith Men’s Defensive Player of the Year winner, Marcus Garrett from Kansas, and Iowa’s Luka Garza, who was a finalist for the 2020 Men’s Player of the Year honor. Gonzaga leads the 50-player watch list with four players included on the list, followed by Duke, which has won more Jersey Mike’s Naismith Trophies (8) than any other school. Seven schools have two players represented include Baylor, Illinois, Kentucky, LSU, North Carolina, Stanford and Villanova. Overall, the ACC and Big Ten top the list, each with eight players represented, while the Big 12, Pac-12 and SEC are close runners-up with six candidates on the watch list.

“The beginning of the season is filled with excitement, optimism and anticipation as each team and every player is undefeated, making the race for the Jersey Mike’s Naismith Trophy wide open. While these 50 candidates are those to keep an eye on, there will be plenty of others who will enter the competition throughout the season,” said Eric Oberman, executive director of the Atlanta Tipoff Club. “This year will be especially exciting as players who were unable to finish their seasons last year have even more to prove.”

A list of the midseason 30 team will be released in early February, followed by the 10 national semifinalists and four finalists on March 4, 2021, and March 16, 2021, respectively. Players who do not make the watch list are still eligible to be selected for the midseason 30 team. The 2021 Jersey Mike’s Naismith Trophy will be awarded during the Final Four at the Naismith Awards Brunch on April 4, 2021.

“As we sponsor the collegiate honor for the first year, Jersey Mike’s is excited to partner with the Naismith Trophy,” said Rich Hope, chief marketing officer, Jersey Mike’s Franchise Systems, Inc. “We look forward to following these stellar athletes throughout the season and honoring one of these talented players as the winner of the 2021 Jersey Mike’s Naismith Trophy.”