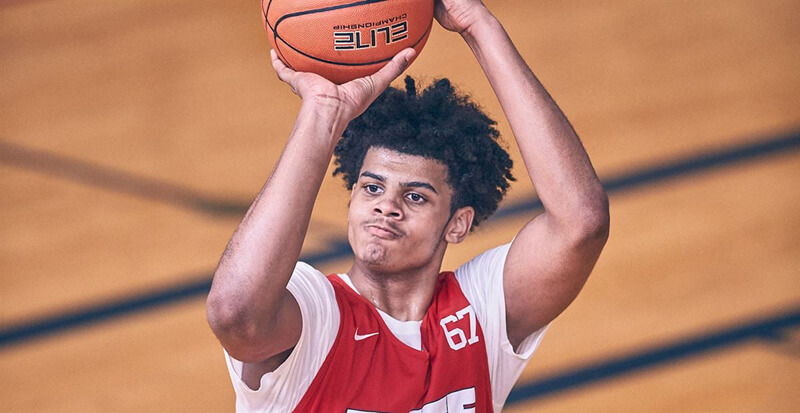 2021 four-star power forward Bryce Hopkins is set to cut his list from nine schools to five this weekend, he announced on Twitter. Hopkins is currently ranked as the No. 30 prospect nationally in the 247Composite.

Indiana has been involved in Hopkins’ recruitment for about as long as any other school, initially extending an offer in the summer of 2019, even before he committed to Louisville.

The growing sentiment is that Hopkins will choose Kentucky, with all seven crystal ball predictions leaning in favor of the Wildcats. Hopkins recently visited Kentucky’s campus.

Indiana is still in heavy pursuit of Trey Kaufman and Aminu Mohammed in the 2021 class.

“Look for Lander and veteran guard Rob Phinisee to form a strong perimeter duo for the Hoosiers,” Rothstein wrote.

Lander, who was originally set to graduate high school in 2022, reclassified this spring to join Anthony Leal, Trey Galloway and Jordan Geronimo as the newest members of IU’s roster. While Lander will need more time to mature physically, he has the ability to be an instant contributor for the Hoosiers.

Illinois’ Adam Miller was the only other Big Ten freshman named on the list.

Jon Rothstein was told by sources that the Big Ten-ACC Challenge will be played on campus, rather than in a bubble-like setting. The target dates for the event is Dec. 8-9, only a week after Indiana is set to travel to Asheville, North Carolina for the Maui Invitational.

Indiana is expected to play a road game after routing No. 17 Florida State 80-64 in Assembly Hall last season. The Big Ten prevailed 8-6 over the ACC.

The Hoosiers hold an overall record of 8-11 in the annual competition but are 2-7 on the road. Indiana is 2-3 in its last five matchups.

For the second consecutive week, COVID-19 numbers across all of Indiana’s campuses have decreased. The statistics from last week’s mitigation testing were released yesterday.

The update came before Indiana Governor Eric Holcomb announced that the state would enter stage five of its return to normalcy. Restaurants, bars and nightclubs can return to full capacity and sporting events and festivals can resume.

At this time, it is unclear what the attendance policy might be for Big Ten basketball games for the 2020-21 season.