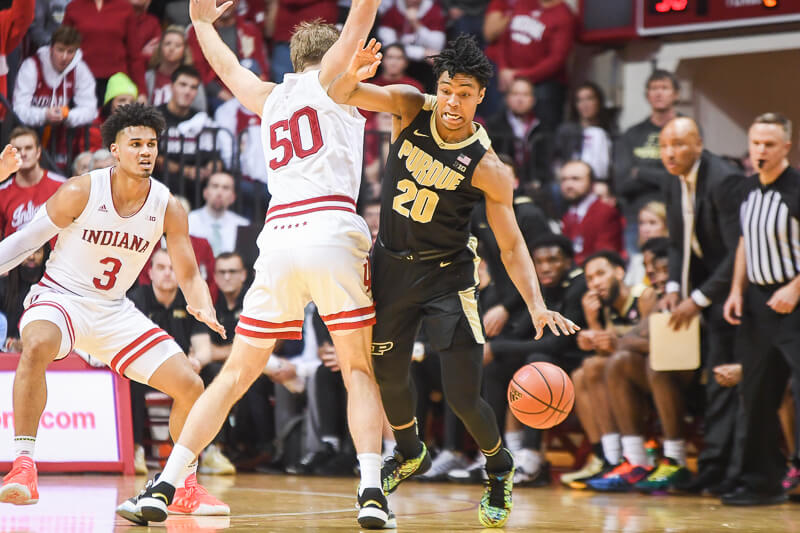 Indiana returns to the road on Thursday night when it travels to West Lafayette to take on Purdue at Mackey Arena. The Boilermakers are 14-14 overall, 7-10 in Big Ten play and have lost four straight games.

Thursday’s game will tip at 7 p.m. ET on FS1 with Tim Brando and Steve Lavin on the call:

After winning at Minnesota last Wednesday and beating then No. 9 Penn State on Sunday in Bloomington, Indiana is back on track to return to the NCAA tournament.

The Hoosiers are 18-9 overall, 8-8 in the Big Ten and are solidly in most tournament projections entering Thursday’s game in West Lafayette.

Purdue, meanwhile, is struggling. After beating Indiana 74-62 in Bloomington on Feb. 8, the Boilermakers appeared on their way to making a surge towards a tournament bid. But Purdue hasn’t won a game since and enters Thursday’s rivalry matchup desperately in need of wins.

This rivalry has been dominated by Purdue in recent seasons. Archie Miller is 0-4 against Purdue since being hired in Bloomington in 2017 and Indiana is just 1-9 in its last 10 games against the Boilermakers.

Indiana’s 12-point home loss to Purdue was arguably the low point of this season. With a week off to prepare for the game and the return of Hall of Fame coach Bob Knight to Assembly Hall, the Hoosiers were listless and not competitive for most of the second half.

Purdue had a significant advantage at the free throw line in the first matchup as it took 10 more free throws than Indiana, which doesn’t happen often for an opponent on Branch McCracken Court. The free throw discrepancy only resulted in five more points for Purdue, but on an afternoon where it only hit 33.3 percent of its 3-point attempts, the Hoosiers could have benefited from getting to the line more regularly. In addition, Purdue never let Indiana get going on the offensive boards. The Hoosiers grabbed just eight offensive rebounds in the game.

Guard play was also a big problem for Indiana as the four members of its backcourt – Al Durham Jr., Rob Phinisee, Devonte Green and Armaan Franklin – combined for just 17 points on 6-of-19 shooting from the field. Green, who has struggled with consistency all season, was just 1-of-7 in the loss.

Freshman Trayce Jackson-Davis, however, was a bright spot. Jackson-Davis had team-highs in points (16), rebounds (8), assists (4), blocked shots (3) and minutes played (34) in the 74-62 loss. He’s continued to play well the last couple of weeks and earned Big Ten freshman of the week honors last week by averaging 20 points and 13 rebounds in a pair of wins.

KenPom rates Mackey Arena as the second toughest road venue (behind Carver Hawkeye Arena) for Big Ten foes and some of Purdue’s performances at home this year are eye opening.

Much of Indiana’s outlook on Thursday will be tied to how well it can take care of the ball. The Boilermakers are first in the conference in turning opponents over with a defensive turnover percentage of 18.9. Turnovers are a clear weakness for Indiana, but the Hoosiers have taken care of the ball better in recent weeks. In its last road game – a 68-56 win at Minnesota – Indiana turned it over on just 14.8 percent of its possessions.

Rebounding is also a major key in the rematch as both teams rank in the top four in conference play in offensive rebounding percentage. Purdue has the Big Ten’s best offensive rebounder in Trevion Williams and limiting second-chance points from the sophomore will be crucial for the Hoosiers.

The KenPom projection favors Purdue by five with just a 32 percent chance of an Indiana victory. The Sagarin numbers like the Boilermakers by two.

Indiana is just 2-6 in true road games this season with wins against Nebraska and Minnesota. But its losses have come by an average margin of 15.5 points.

The start for the Hoosiers is likely to go a long way in determining how the game will unfold. When Purdue has blitzed opponents this season in West Lafayette, it has gotten off to blazing starts on the strength of its home crowd. But teams who have been able to weather the atmosphere early and throw a counter punch have found success.

A win Thursday would be another step into solidifying what is turning into a solid NCAA tournament resume for the Hoosiers. It would also effectively end Purdue’s chances of getting an NCAA tournament bid and likely secure a spot for the Boilermakers in the bottom four of the Big Ten tournament bracket. Most importantly, Indiana simply needs to beat its rival for the first time in more than four years.