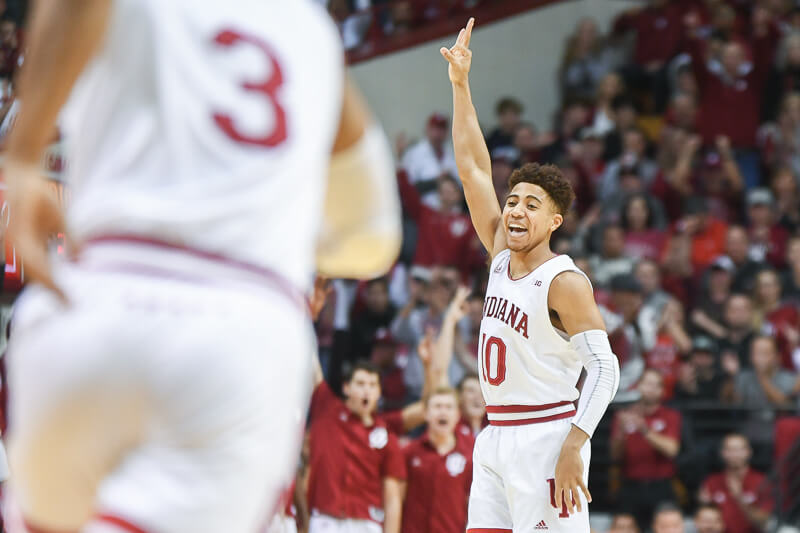 Indiana moved to 3-2 in league play with an impressive 66-54 win over Ohio State on Saturday afternoon at Simon Skjodt Assembly Hall.

Here are five takeaways from the win over the Buckeyes:

· Phinisee sets the tone early: For the first time this season, Rob Phinisee was on the floor for the opening tip.

And his energy, shot making, poise and defense were difference makers for the Hoosiers. Phinisee scored nine of his 13 points in the first 3:20 of the game as he provided Indiana with a credible 3-point shooting threat. Without his early game boost – which clearly set the tone for the rest of the afternoon – Saturday’s outcome could have been a different story.

By the time the final horn sounded in Assembly Hall, Phinisee had logged a season-high 29 minutes and had collected seven rebounds and four steals to go along with his 5-for-12 shooting performance from the field.

“He’s a warrior, and he’s stuck with it through the hard times,” Justin Smith said postgame of Phinisee. “He was due for one of these games. He came out hot, and that really set the tone for the rest of the team going forward during the game. He’s a key part of the team, and we’re glad that he’s playing well again.”

Phinisee, who didn’t attend yesterday’s postgame availability because he was receiving postgame treatment according to a program spokesperson, appeared to be banged up at the conclusion of the game.

Archie Miller didn’t have a firm answer on what the status of Phinisee will be moving forward.

“I have no idea what happened to him,” Miller said. “He wasn’t comfortable at the end of the game. I’m not real sure. Hopefully he’s okay.”

· Green responds to benching against Northwestern: Devonte Green was a non-factor down the stretch in Indiana’s 66-62 win over Northwestern on Wednesday.

Miller, who was clearly sending a message to Green that he was unhappy with his play in the game, opted to go with his other guards for the final 11:04 of that win.

Green found himself on the bench to start Saturday’s game against Ohio State and his first half play against the Buckeyes didn’t suggest that he was going to turn things around. The Hoosiers trailed 34-31 at intermission and were -6 with Green on the floor in the first half.

But Green was indispensable for Indiana in the second half of Saturday’s win as he scored 15 of his game-high 19 points in 16 minutes. Green took good shots, didn’t turn the ball over and looked like a leader on the floor.

When asked about his benching against Northwestern and his mindset in the aftermath, Green sounded like a guy who had put that experience quickly in the past.

“The game never changes. I mean, some days it’s good, some days it’s bad,” he said. “And you’ve just got to bounce back from the bad ones. So that was the mindset I had coming into today, to the next day, and to every day moving forward. I always want to have a better day than the last, bad or good.”

But the Hoosiers put together their best effort of the season on that end in Saturday’s win and limited Ohio State to a season low .79 points per trip.

Indiana did an excellent job defending 2s against Ohio State as the Buckeyes shot just 8-for-26 (30.8 percent) and never let Kaleb Wesson get comfortable. Wesson was 1-for-7 from inside the 3-point arc and had to labor just to reach double figures in scoring.

“Our ball pressure and our guys up after the ball, five guys worked extremely hard on the ball,” Miller said. “But for a minute there, I thought our positioning and where we were supposed to be, our tightness, our principles were intact a little bit. Bigs did a great job for the most part in the game, really impacting the ball the best they could. I thought our guards did a decent job.”

· Indiana gets to the line … but fails to convert: For the fourth time in five Big Ten games, Indiana posted a free throw rate (FTA/FGA) better than 50 percent.

Indiana’s free throw rate of 52.5 percent is the highest in the league by a significant margin, but the Hoosiers are negating some of that advantage by continuing to miss free throws.

For the season, Indiana ranks just 230th nationally in free throw shooting percentage (68.2) and the Hoosiers are shooting just 66.2 percent in conference games.

“Obviously the free-throw line is so important to us,” Miller said. “And we didn’t take care of business making them or our offense would have been a lot more efficient.”

· Ohio State’s skid representative of how difficult the Big Ten is: Once ranked No. 2 in the Associated Press top 25 poll, Ohio State now sits in a tie with Northwestern for last place in the conference standings at 1-4.

As of Sunday morning, the Big Ten has 12 teams ranked in the top 38 of the KenPom standings and with the exception of Michigan State (5-0), every team in the league already has two losses in conference.

The Big Ten standings are likely to be a jumbled mess in the middle, but its overall strength might propel the league to beat its record of eight teams in the NCAA tournament that it recorded last spring.