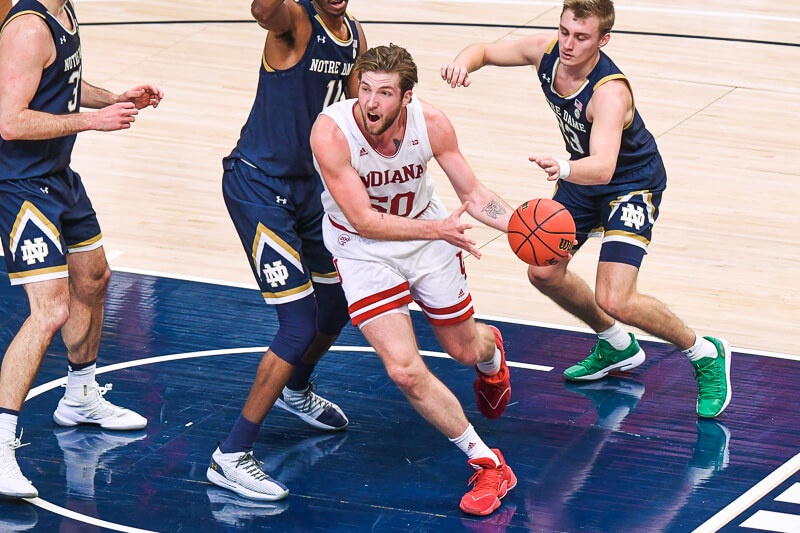 Notre Dame clanged 3-pointer after 3-pointer and threw a soft zone at Indiana, one where the Hoosiers found ample opportunities in the middle. The Fighting Irish were out of sorts and playing with little spirit, as the Hoosiers extended their lead out to 17 with 15:18 to go in the second half. A change from zone defense to man-to-man for the Irish in the second half had the Hoosiers getting to the line at a higher clip, which helped them to the healthy lead.

But this is the Crossroad Classic. And this is Notre Dame and Indiana. No lead is safe, and so here the Hoosiers came tumbling and stumbling down the stretch, a 17-point lead evaporating to a five-point deficit with 3:42 to go. That’s a 22-point swing and Indiana looked like it was cooked.

How’d it happen? Indiana’s offense cratered. While the man-to-man defense helped them get to the line early in the half, Notre Dame, a team known for not fouling, defended more cleanly. And Mike Brey instructed his defense to really key on the interior, making things hard for the likes of Trayce Jackson-Davis and Joey Brunk. On many possessions, the Fighting Irish did what’s worked best against Indiana’s offense this season, packing it in and making it tough for the Hoosiers to get the ball inside at all. That turned them into more of a jump shooting, perimeter-oriented team and the results weren’t great.

Indiana also let things slip on defense. After Nebraska beat them off the dribble last time around, the Hoosiers were much better over the beginning of this game containing the perimeter. But during Notre Dame’s comeback, things got worse in this department, which allowed the Irish to break down Indiana’s defense more frequently. And while the Irish were awful from 3-point range in this game (6-of-27), they hit 2-of-3 over the final 10 minutes (not counting Rex Pflueger’s heave at the buzzer), to aid in the comeback.

It looked like Indiana had blown this one, but credit the Hoosiers for playing with poise down the stretch. Armaan Franklin splashed home a three to pull the Hoosiers within two points. After missing a close one and the ball going out on Notre Dame, Jackson-Davis scored on a nicely-designed inbounds play to tie the contest. Prentiss Hubb made 1-of-2 at the line after Al Durham fouled him to put the Irish back up a point. And then the possession of the game happened. Notre Dame again threw a double team at Jackson-Davis. He kicked the ball out of the right post to Durham on the left wing. Durham swung it down to Franklin in the left corner. He rose up and knocked down the 3-pointer to put the Hoosiers up two, 62-60, where the game would end.

“They’re so physical down there that you have to go in and help,” Brey said after the contest. “Jamming it up and helping helped us … But the big possession, when they swung it around to (Franklin), I almost felt like we maybe violated the basketball gods a little too much in not guarding the arc.”

It capped off a banner game for Franklin. His 17 points were a game and career-high. And the freshman’s 4-of-5 performance from 3-point range — after entering just 4-of-27 on the season — saved the day and the game.

Notre Dame’s John Mooney got by Jackson-Davis on the left wing on Notre Dame’s last half court possession of the contest, missing a back door pass that could have tied the game. Mooney instead kept it and Jackson-Davis recovered, blocking the shot that resulted in a tie-up with the possession arrow going to the Hoosiers. Justin Smith was fouled on the ensuing Hoosier possession and missed the front end of a 1-and-1, leading to Pflueger’s heave that missed at the buzzer.

After several minutes of stagnant offense and shaky defense, Indiana executed in the final 30 seconds of the game to pull this one out and emerge victorious.

Despite the collapse, remember that KenPom projected a three-point Hoosier victory and that’s about what happened here.

Indiana hasn’t inspired much confidence from the fan base over the last two contests. But they both go down as Ws. The Hoosiers now sit at 11-1. The eye test ain’t pretty, but the record will sure do.