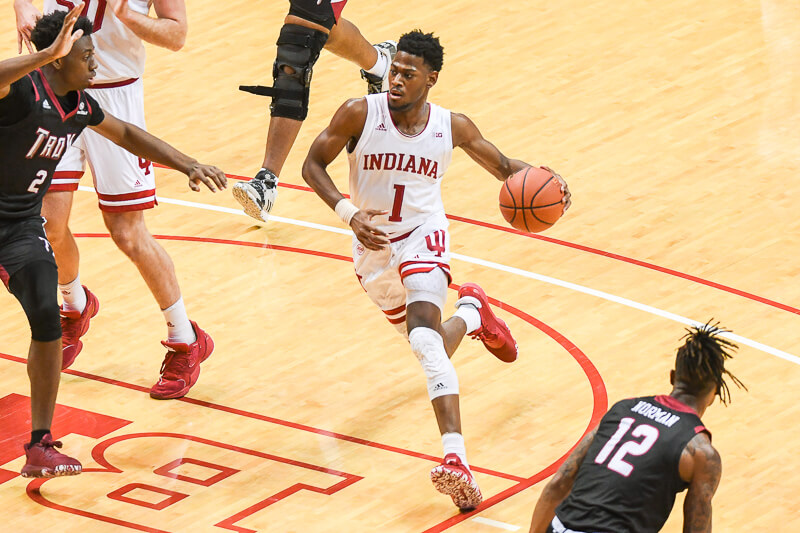 Indiana moved to 4-0 on Saturday night with a 100-62 win over Troy at Simon Skjodt Assembly Hall. The Hoosiers will host Ivy League foe Princeton on Wednesday in Bloomington.

Here’s a look at five takeaways from the win over the Trojans:

The Hoosiers hit nine of their 21 attempts (39.1 percent) in Saturday’s win over Troy and are currently shooting 36.2 percent from distance this season. Perimeter shooting won’t be a huge emphasis for this team as Indiana is generating just 20.1 percent of its points from behind the 3-point arc, but poor shooting was a season long struggle in Archie Miller’s second season.

Al Durham is off to a hot start from the perimeter as the left handed junior has knocked down nine of his 17 attempts from distance.

Devonte Green returned on Saturday and played 20 minutes in his season debut, but the Hoosiers were without Rob Phinisee (strep throat).

Indiana now has just three games remaining this month and time is running thin to build chemistry before a challenging December slate awaits.

“If we can get him (Rob) back and get him into the mix and start to get some chemistry into our back court, I think that would be really, really important for this team,” Miller said Saturday.

· Indiana’s turnover percentage is strong once again: Miller stated earlier this season that Indiana needs to be at 12 turnovers or less per game and the Hoosiers have hit that goal in three of their four games.

Last season, Indiana had a turnover percentage of 17.9, which ranked 133rd nationally.

The 2019 Indiana Mr. Basketball is averaging 14.5 points and 9.5 rebounds in 24.5 minutes per game and is shooting 75 percent from the field. That type of efficiency won’t continue for Jackson-Davis once the competition level improves, but the Center Grove product is Indiana’s best frontcourt player through four games.

“Really on offense, it’s just my teammates putting me in the right position to score and then really just anticipation for rebounds,” Jackson-Davis said of his success so far. “Just got to anticipate where the ball is coming from, and I thought I did that well tonight.”

· Through four games, Indiana has played one of the nine worst schedules: Indiana’s weak November schedule was well publicized in the preseason and KenPom’s numbers bear out just how bad of a slate the Hoosiers have played so far.

All four of Indiana’s opponents are currently ranked 275th nationally or worse in Pomeroy’s ratings and overall, the schedule ranks 345th nationally out of 352 teams.

That should improve over the next three games as Indiana hosts Princeton (223), Louisiana Tech (92) and South Dakota State (209).