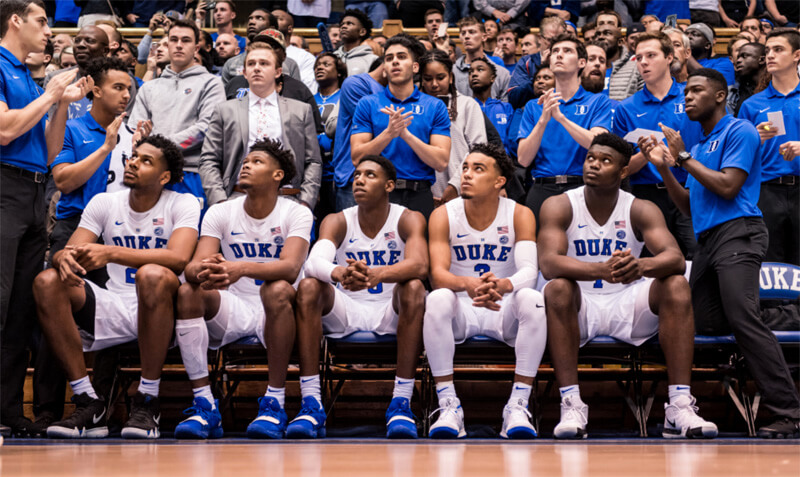 Friday proved to be another wild day on the hardwood, which sets the stage for a busy Saturday that will feature 14 Championship games.

American – Bubble teams will be rooting for Houston and Cincinnati in the Semi-Finals of the AAC, while Memphis and Wichita State will try to play spoiler.

Atlantic-10 – VCU’s loss means there will definitely be a bid thief in the A-10. The only question now is which team.

Mid-American – Buffalo is in the field either way, which means bubble teams will be rooting against Bowling Green in the finals.

Mountain West – With Nevada going down in the semis, it’s up to Utah State to keep San Diego State from stealing a bid.

Pac-12 – Oregon needed overtime to stay alive, but the Ducks knocked off Arizona State to give themselves a shot to steal a bid on Saturday night against Washington.

It’s amazing how quickly the picture can change even at this stage of the season, but the return of Zion Williamson has allowed the committee to assess Duke at full strength once again. That, coupled with Friday’s win over North Carolina, has propelled the Blue Devils back onto the one line. Virginia remains there as well despite its loss to Florida State, and Kentucky’s blowout win over Alabama keeps them as a one seed, too.

Even though Michigan State and Tennessee also won, the last one seed came down to North Carolina and Gonzaga. The Heels are 11-1 on the road have 10 Quad 1 wins, including a double-digit home with over the Zags. Gonzaga has just one win against the Top 30 of the NET, although that victory against Duke in Maui is as impressive as any win this season. UNC has eight Top 30 victories, which for me gave them the nod. Either way, Gonzaga will end up out West, but despite my earlier skepticism, I am projecting the ACC for three one seeds.

This is definitely something I intend to evaluate further today, as I go through yet another scrub of the seed list.

The projections below are based on all games played through March 15, 2019. Following the bracket, I included a few thoughts on the last four in as well as the other teams I considered.

St. John’s – The Red Storm did very little in the non-conference outside of beating VCU, and they lost two times each to DePaul, Providence, and Xavier. St. John’s did sweep Marquette in the regular season before getting run off the floor against the Golden Eagles on Thursday night, and I ultimately don’t feel they are in true jeopardy.

NC State – A huge comeback and late free throws propelled the Wolfpack to a win over Clemson in their ACC Tournament opener, but they were blown out by Virginia on Thursday. The Wolfpack’s non-conference strength of schedule is the worst in the nation, and just one of their nine ACC regular season victories came against a team with a winning league record (Syracuse). Additional home wins over Auburn and Clemson are helpful, but it seems like each year there is a team that winds up getting punished for a poor non-conference schedule, which this year just might be NC State. For now, the fact that all but two of their losses have come against teams in the Top 25 of the NET and decent metrics have them barely inside the cutline.

Creighton – The Bluejays still don’t have a loss to a team outside the Top 75 of the NET, but Thursday’s last-second loss to Xavier gave them their 14th defeat of the season. Creighton does have three Quad 1 wins, but the road win at Marquette is their lone victory over a team comfortably in the field.

Texas – A Big 12 Tournament loss to Kansas dropped the Longhorns to 16-16. While they do boast five Quad 1 wins, I cannot see the committee putting in a .500 team.