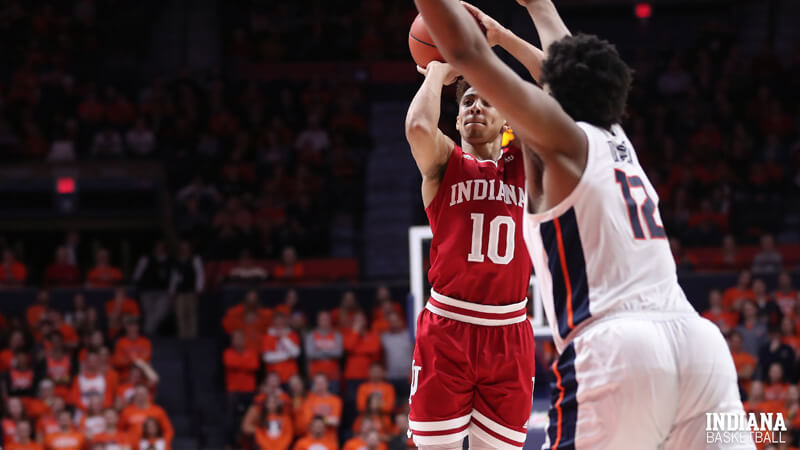 In terms of their NCAA tournament bubble status, the Hoosiers pretty much had to win this one tonight. So all they did was go out and post their best offensive performance of the season (1.38 points per possession) on the road against an improved Illini team.

We all called this one, right?

The first half was a shootout in Champaign, each team dropping in bucket after bucket. At half, the Hoosiers scored a blistering 1.56 PPP with Illinois up at 1.26. Try as their pressure defense might, the Illini just couldn’t contain Indiana’s penetration and it opened up a lot for the Hoosier offense. They scored 30 points in the paint. And after starting out just 1-of-7 from distance, Indiana started to heat up from deep, entering the half a respectable 6-of-17 from beyond the arc. Illinois even resorted to a zone for stretches to try and slow the Hoosiers down. Seven Indiana players scored in the first half, Juwan Morgan leading the way with 11, en route to a comfortable 52-42 lead at the break.

But with the way Illinois was also scoring, a flat start to the second half from the Hoosiers may have allowed the Illini to cut into their 10-point lead — and quickly. It didn’t happen. Indiana stepped on the accelerator in the first 10-plus minutes after halftime, driving the lead all the way up to 22. Thirteen points was as close as the Illini would come the rest of the way.

This was the first contest of the Big Ten season the Hoosiers scored over 80 points, as their previous high was 79 against Michigan State in an overtime win on Feb. 2. Indiana continued its surge on the offensive boards since its win against the Spartans on Saturday. The Hoosiers rebounded 39 percent of their misses, allowing for even more chances to run up the score, turning those rebounds into 14 second-chance points. They were great with the ball, turning it over on just 10.4 percent of their possessions.

Robert Phinisee had his best offensive game of the season. His 17 points (7-of-12) were a career-high. Phinisee’s ability to break the Illini down off the dribble allowed for a number of scores at the rim. He also found teammates to the tune of five assists. While Justin Smith had a couple of missteps around the rim, he continues to look like a different player on offense. The sophomore played mostly in control, hit some nice buckets and cleaned up the offensive glass for 15 points on 7-of-12 shooting.

Devonte Green scored 11 points in this one thanks to being hot from distance (3-of-5). Green also had a number of nice assists to teammates near the basket and led the team with six assists, aiding the Hoosiers to 52 total points in the paint. Morgan led the way with an efficient near double-double (20 points on 9-of-14 shooting, nine rebounds). Romeo Langford got off to a solid start with nine points in the first half, but took just two shots after the intermission. He missed them both.

Indiana took care of business tonight in a big way. Do it again Sunday and the Hoosiers inch closer to a potential NCAA tournament berth.