Indiana finally shows up, but falls just short to Purdue 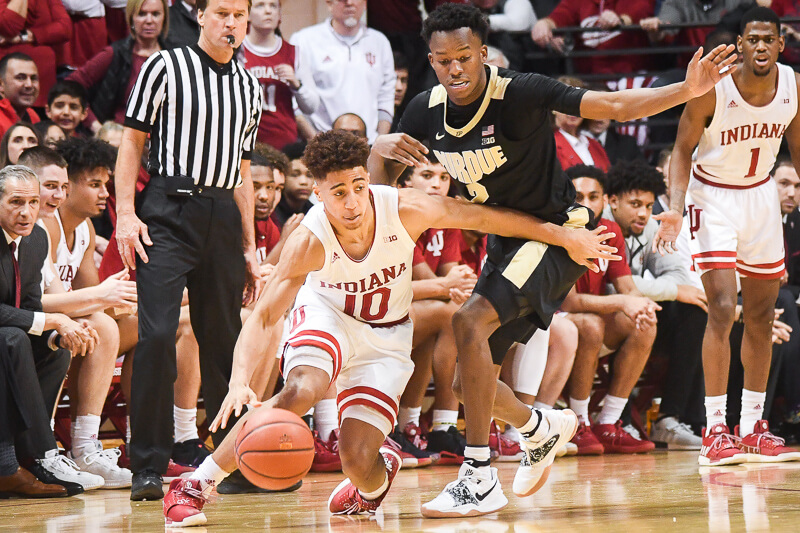 The “drastic changes” at which Archie Miller hinted after Indiana’s loss to Minnesota weren’t so much a matter of reinvention as they were of rediscovery.

There were few significant systematic overhauls, no dramatic adjustments in the rotation or message-sending changes to the starting lineup. The only drastic change was in the way IU approached the game and the manner in which it competed throughout. Indiana was almost unrecognizable from the listless team that took the floor Saturday against Minnesota, and despite an eventual 48-46 loss, looked as though it belonged – really, sincerely belonged – on the same court as Purdue.

The Hoosiers came into the game ready to compete, which, in itself, was a shift. That they sustained that effort for the game’s full duration was a revelation. Indiana had long been searching for the confidence and intensity with which it played early on in the year, and on Tuesday night, seemed to have finally found it.

“Losing at home [to] Nebraska in the way that we did really shook us, shook our confidence,” Archie Miller said. “And we’ve been trying to fight our way out of it a few times. You saw it tonight. Obviously at Michigan State we had a nice performance there, but in most of our other games it’s usually been about the confidence level of our team and forgetting at times what really, really matters. And that’s the unquestioned max effort that you give regardless of the circumstances.”

From the start, it became clear that Indiana would not allow itself to be outclassed or outhustled the way it had so many times in the last month. The Hoosiers battled on the glass, contested Purdue physically at the rim, and fought for entire defensive possessions. They turned the game into a slog, which seemed to sap Purdue of its energy while invigorating Indiana.

“Really hard-fought game,” Miller said. “Probably as physical of a basketball game that I’ve ever been a part of.”

That physicality manifested early on, as the two teams, frankly, beat the crap out of one another. The result was an ugly yet extremely hard-fought contest in which the participants had no choice but to match the game’s intensity. Both sides scored fewer than 0.8 points per possession and shot a combined 34-of-115 from the field – and 11-of-55 from downtown. Indiana hung around by controlling the foul line and the glass as Purdue won the turnover and interior scoring battles. Most of all, it was both teams’ defensive effort that kept the game tight.

Through constant vigilance and focused, well-timed help, the Hoosiers made Carsen Edwards work for most everything he got and held the Big Ten Player of the Year candidate to just nine points on 4-of-24 shooting and 0-of-10 from deep.

Al Durham in particular kept a tight watch on Edwards, slaloming through circuits of screens in order to remain tight on the guard’s hip while Juwan Morgan and De’Ron Davis provided assistance from the back line as necessary. Durham, who blanketed Matt McQuaid in IU’s last win, may be IU’s most attentive guard defender off the ball and rangiest on-ball pest. Purdue’s Nojel Eastern performed much the same task against Romeo Langford, who attempted only six field goals.

Both teams did make slight adjustments to their defensive approaches from the first time they squared off. The Boilermakers, who keyed in on Langford to the most extreme degree any of IU’s opponents have, didn’t devote quite so much attention to barricading the lane this time around, leaving Eastern – perhaps the best wing defender in the Big Ten – to apply most of the pressure. Indiana, meanwhile, dialed back its hard-hedging on ball screens, which allowed it to better contain Purdue’s actions in pick-and-rolls and dribble-handoffs.

Still, both Edwards and Langford found ways to remain engaged offensively – Edwards by acting as a playmaker and Langford by earning constant trips to the free-throw line – which allowed each team to sustain the game’s physical drudgery. Langford was the best player on the floor in the first half, playing both ends of the floor with an assertiveness that has occasionally eluded him. He seemed to make a concerted effort on the glass

Morgan struggled offensively, but helped tie Indiana together on defense and was central in its effort on the boards. Davis’ interior presence in the second half proved difficult for Purdue to handle. In the end, it wasn’t quite enough, as Indiana’s miscues caused them, once again, to fall just short. The Hoosiers missed 13 shots at the rim, coughed the ball up 17 times, and missed seven free throws.

Langford did not attempt a shot in the second half, when the offense reverted slightly to old tendencies, and the team tallied only seven assists – an indicator of stagnation. Any one of those factors might have swung the game Indiana’s way, had it executed more cleanly.

Still: Indiana showed signs of life Tuesday night, and that alone marks progress. The Hoosiers competed, rode the home crowd, and came up just short against a superior team. The remaining schedule offers no easy wins, and this team is nearly out of opportunities to revive its season. Indiana will suffer the sting of this loss, in hopes that it might lead to brighter days.