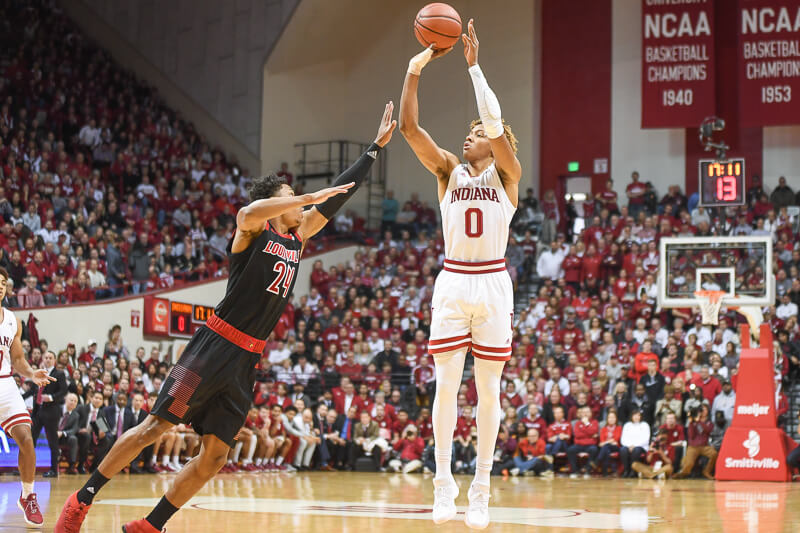 As 2018 wraps up and Big Ten play resumes, it felt like the right time to take stock of the Hoosiers’ NCAA tournament profile through the first 13 games of the season.

Here’s a quick reminder of how the selection committee classifies wins:

With that as backdrop, here are five takeaways from IU’s NCAA tournament resume to date.

1. The Marquette win is aging well.

Since being blown out at Assembly Hall, the Golden Eagles have gone 9-1 with the lone loss coming against Kansas on a neutral floor. Marquette needed overtime to beat Louisville in New York but subsequently racked up top 40 KenPom wins against Kansas State, Wisconsin (in OT), and Buffalo. That performance has propelled the Golden Eagles to 14th in the NET through Sunday’s action. At this point, I’d argue they are the favorite to win the Big East but should at least finish in the top three. Either way, it’s hard to see a scenario where this doesn’t wind up as a quadrant one win for the Hoosiers.

2. The Arkansas loss…not so much.

To be clear, a one-point road loss at a power conference team is unlikely to come back to haunt IU, but the Razorbacks haven’t exactly covered themselves in glory since beating the Hoosiers. They are 7-2 since winning that game, but the best victory was over Texas State. Both losses came at home, with one against an up-and-down Western Kentucky team, who should be the favorite to win Conference USA, and the other against ACC cellar dweller Georgia Tech. The Razorbacks currently sit at 84th in the NET with the win over IU their only victory in the top two quadrants. Arkansas is still projected to finish in the middle of the pack in the SEC, and the best case here is that they play well enough that the loss to the Hogs moves back into quad one.

3. None of IU’s mid-major opponents are likely to help the Hoosiers’ resume.

The “other six” opponents on IU’s non-conference schedule are all ranked 243rd or worse on KenPom through Monday’s games with Chicago State the only one currently ranked 300th or lower. Only Central Arkansas is projected to finish over .500 in league play, and none of the teams are projected to finish higher than fifth in their respective conferences. In terms of the NET, all six are ranked 247th or worse with three of them ranked outside of the Top 300, so barring something unforeseen, these victories won’t wind up falling outside of quadrant four.

4. The Big Ten’s strong non-conference play is the rising tide that lifts all boats.

By any measure, the Big Ten has had a phenomenal non-conference performance. The league currently ranks second on KenPom behind the Big 12 and ahead of the ACC, with seven of the top 26 teams on KenPom and 11 squads in the top 50. As for the NET, the league boasts six of the top 21 teams and 10 in the top 50. According to BartTorvik.com, the Big Ten is second only to the ACC in non-conference quad one wins (14) and winning percentage (.467) through Sunday’s games.

The impressive wins outside of league play help to enhance the non-conference profiles of the individual teams who earned those victories as well as establishing the league’s overall strength. For the most part, there are very few conference losses that the committee would deem to be “bad,” while chances for quality wins will prove to be plentiful, providing a legitimate chance to get nine or 10 bids for the league.

5. IU has positioned itself to earn a protected seed.

The most recent update at Bracket Matrix positions IU as the last five seed in its composite rankings, and the Hoosiers are ranked 20th in the NET through Sunday’s games, both of which suggest a top four seed is in play depending upon how the Big Ten season plays out. I’ll be releasing my first set of projections next week, but as of now, I have the Hoosiers right on the cusp of a four seed as well.

IU is one of just eight teams with five wins in quadrants one and two, and with 10 Big Ten teams currently in the top 50 of the NET, there will be plenty of chances to earn quality wins and very few opportunities to take on a bad loss. In fact, the only remaining games that would currently fall into quadrant three are the home games with Illinois and Rutgers.

As mentioned above, the Big Ten’s strong non-conference play has positioned the league to challenge for 9-10 bids to the NCAA tournament, so if the Hoosiers can manage to win 13 or 14 conference games, a top four seed seems likely. At the very least, their performance to date hasn’t eliminated that possibility.